Elena Orlova-Afinogenova is perhaps best known in Germany, where she is represented by Fabra Ars Gallery. In 2017, the artist unveiled an earlier commissioned painting of “The First Meeting in Castle Eutin” (Erste Begegnung auf Schloss Eutin) featuring the encounter of a young Princess Sophie Auguste Friederike von Anhalt-Zerbst, or “Fike” (future Catherine the Great) with her future husband Herzog Karl Peter Ulrich von Holstein-Gottorp (later, Tzar Peter III). Both were children when they first met in 1739, and this was exactly the moment captured by the artist. The painting now remains in a local museum in Zerbst.

Elena Orlova-Afinogenova, The First Meeting in Castle Eutin, 2017, oil on canvas, Museum of the City of Zerbst, Germany

It took the artist over a year to finish the canvas, as local Zerbst newspapers reported in their  reviews. Indeed, Elena Orlova-Afinogenova is known for her nuanced, textured paintings. In her youth, the artist spent many long hours studying the paintings of old Dutch and Flemish masters in the Hermitage Museum in St. Petersburg. This is particularly apparent in her still lifes that are full of allusions, references and occasional trompe l’oeuils, so much beloved by the artists in the 17th century. An art critic once referred to her compositions as “theatre of things” where objects live their quiet, ineffable, mysterious life.

Being an international artist with an established career, Elena also exhibited in Düsseldorf, Berlin, Mantua, Aalborg (Denmark) and in Philadelphia (U.S.A). It must seem surprising that in her young years she could not even dream of becoming an artist.

Irene Kukota: Elena, when did you become aware that being an artist was your vocation?

Elena Orlova-Afinogenova: Elena I began to draw early in childhood, but I could not even believe that an unassuming person like myself could be an Artist! Only as a first-year medical student (I enrolled to study medicine after I finished school) I realized that, in fact, I had always wanted to be a painter. And it also became clear that I wished for that to happen more than anything else in the world. Eventually, I abandoned my medical studies and entered intensive artistic training, so that I could apply to St Peterburg Repin Academy of Fine Arts.

Irene Kukota: How long did it take you to train to be accepted by the Repin Academy?

Elena Orlova-Afinogenova: As a medical student, I studied human anatomy for a whole year – something that later would prove extremely useful to me as an artist. However, a year into my medical studies, I realised that I was facing my now-or-never moment: I would either become an artist or not. So, this is how I left medicine and began my artistic training. It was extremely difficult at first. I had to work as a courier and then as a cleaner, in order to support myself and keep the daytime available for my art studies. I was lucky to be allowed to audit classes at the Evsey Moiseenko studio. I am immensely grateful to him for believing in me and I will remain so for the rest of my life. Finally, after three long years of honing my artistic skills, the citadel yielded, and I was accepted as a fine art student at the Repin Academy of Arts. 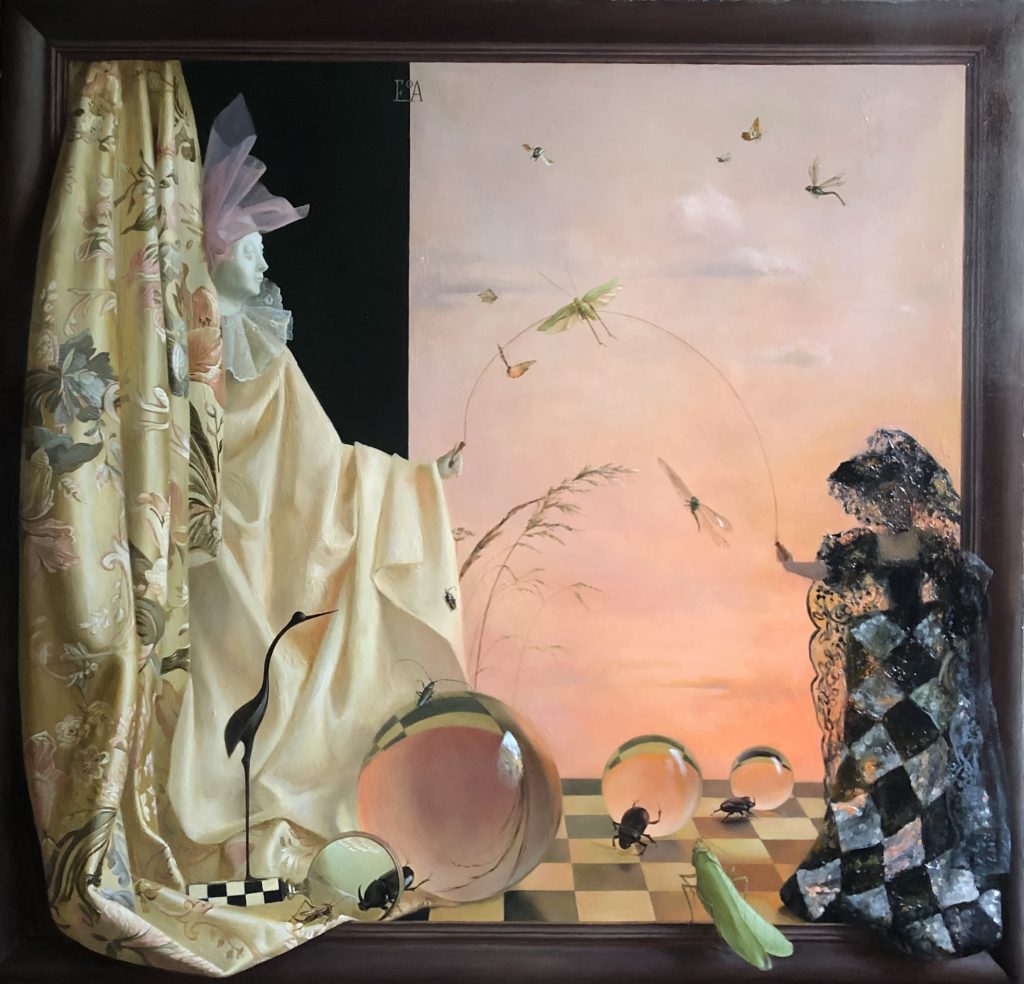 I finished my studies with Moiseenko in 1982. Then I left for Moscow where I took part in the prestigious competition for young artists. I was awarded with travel prize for my “Tokarenko Family” portrait. It was a journey around the Kuril Islands, which was immensely enjoyable and inspiring for my artistic practice.

Irene Kukota: Who was the greatest influence on you, both artistically and personally?

Elena Orlova-Afinogenova: It was my first husband, Gennady Orlov, who taught me essential artistic skills and the foundations of profession. He was a gifted educator and lecturer. He told me, “Remember, every day that you have not spent painting, is wasted.” Eventually, this became my own motto. Evsey Evseevich Moiseenko, with whom I studied at the Repin Academy of Fine Arts, was another major influence. He was a truly outstanding fine arts professor. He taught his students to be artistically discerning, responsible, sensitive and responsive to the world around them.

Irene Kukota: Tell us about your artistic creed, what do you wish to express in your works?

Elena Orlova-Afinogenova: The beauty of the world greatly fascinates me, and I wish to capture this beauty in my art.

Irene Kukota: Do you have any rituals or routines that you follow before setting to work?

Elena Orlova-Afinogenova: Certainly, yes. I need to sit a few minutes in peace and quiet and smoke a cigarette. This is my way of tuning in and concentrating on what I am about to do.

Irene Kukota: Can you describe your normal working process, step by step?

Elena Orlova-Afinogenova: It is hard for me to talk about this, as the process escapes all definitions. I honestly cannot say how it all happens and comes about. After all, I remain an active participant within this process, not an outsider or onlooker. I believe, the best thing I can do during work, is to keep focussing on what I should be doing and how.

Irene Kukota: There is a discernible trace of Magical Realism in your works. Your paintings appear to have a certain mysterious, understated aura about them. What prompted you to choose this artistic language?

Elena Orlova-Afinogenova: Oh, God forbid! I have not deliberately chosen any language – on the contrary, my language appears to have chosen me. Or perhaps, this is just the way my brain works. 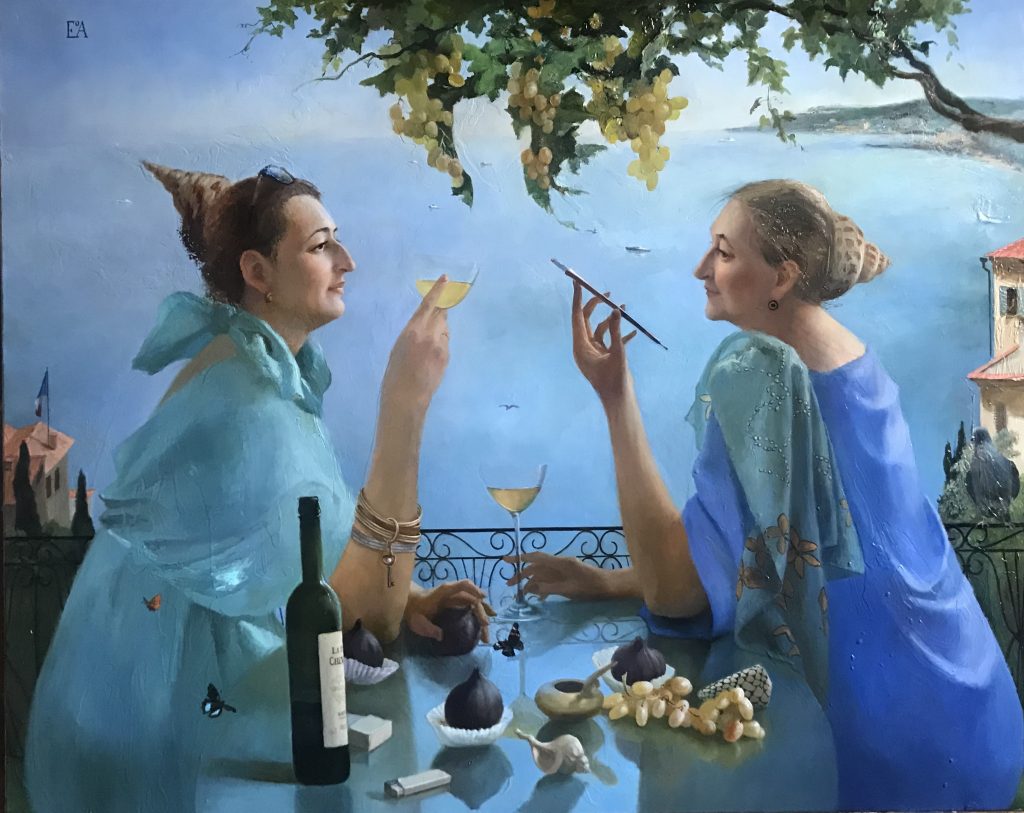 Elena Orlova-Afinogenova, Women, Figs and the Sea, 2019, oil on canvas

Irene Kukota: What do you find so attractive about the collage technique?

Elena Orlova-Afinogenova: I think that collage is a very exciting, exquisite technique. Unfortunately, it is a very time-consuming and painstaking method, and it takes me a long time. A variety of textures makes each collage intriguing, vivid, ever-changing. Depending on the angle or the quality of lighting, the collages may unpredictably alter their compositional highlights. Some minute, insignificant details, such as old lace, scraps of fabric, wallpaper, or newspaper fragments, suddenly transform into snow-covered treetops, lush baroque costumes, flowering meadows, or even rippling water surface. Every year I dream of spending gloomy, dark, and hopeless months of the year working on collages. It gives me such sense of joy and comfort, just to work sitting by the large lamp. Unfortunately, for some reason this never happens. Perhaps, now will be a good time. 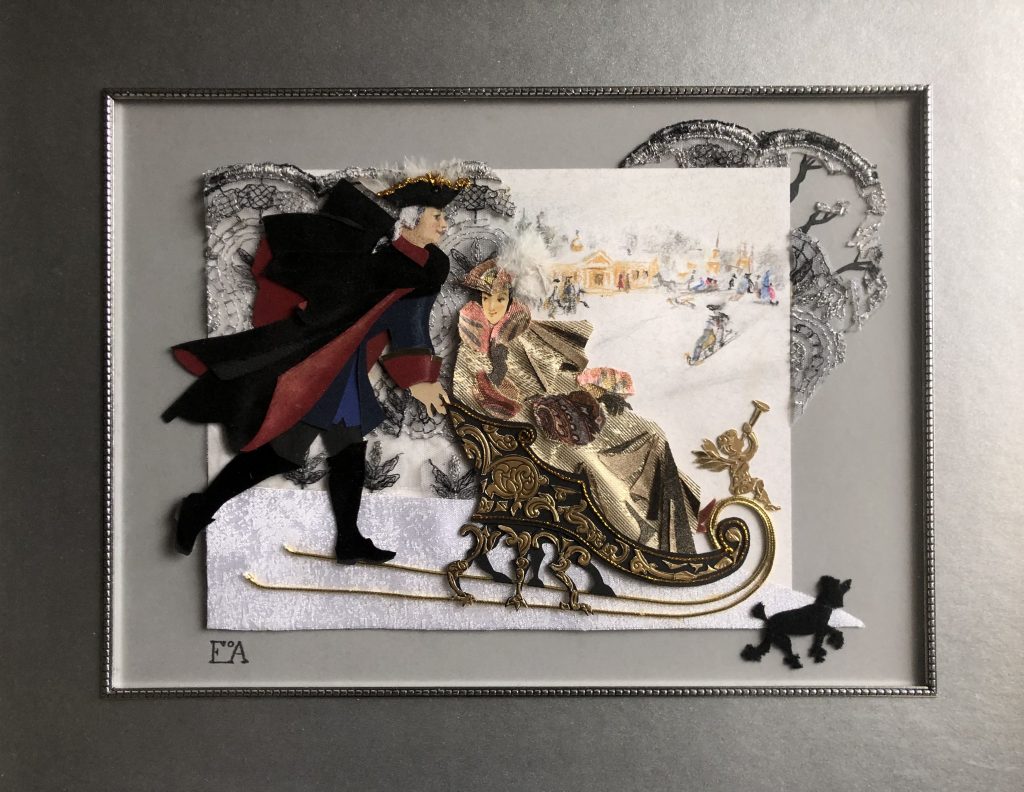 Irene Kukota: Do you work in some other genres or techniques?

Elena Orlova-Afinogenova:  I have recently taken to pastels. This practice is something entirely different and intriguing to me. A whole new language and aesthetics.

Irene Kukota: In your artworks, one can find references to the Middle Ages, the Renaissance, to Dutch and Flemish masters (Northern Baroque), to the Surrealism, and to the Silver Age of Russian culture. Which one of these eras do you like the most?

Elena Orlova-Afinogenova: Probably, the Renaissance. However, I am unwilling to limit my choices only to that era, especially when such a variety and wealth of expressive modes is available.

Irene Kukota: Does this mean that you associate each painterly genre with a certain artistic era (still life corresponding to the Dutch Baroque etc)?

Elena Orlova-Afinogenova:  No. Only a certain artistic aesthetic can be associated with a certain era. However, one can choose any genre one prefers the most. 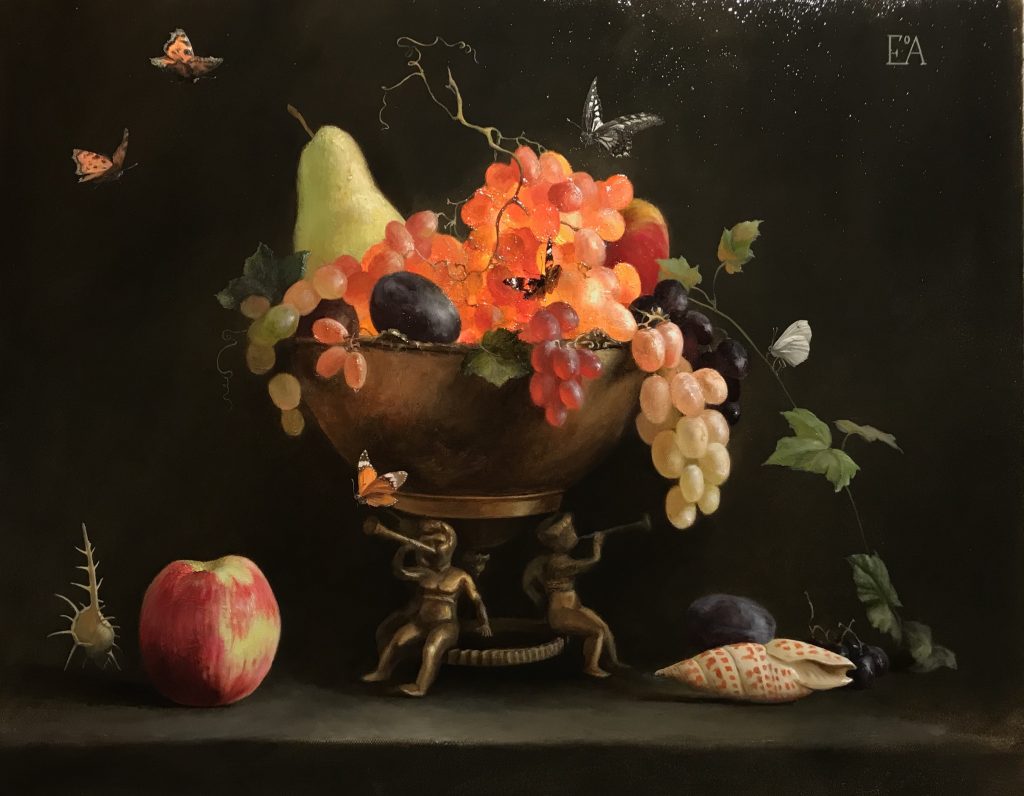 Irene Kukota: In our time, some contemporary artists consider Old Masters to be outdated, old-fashioned, a kind of art that can only be relegated to museums. Do you agree with this or not?

Elena Orlova-Afinogenova: Certainly, not. I can only say that this kind of thinking is tantamount to rejecting one’s ancestors, without realising that if not for them, we would not have even existed.

Irene Kukota: If you could meet someone from the past, it would be….

Irene Kukota: What would you recommend to a novice artist?

Elena Orlova-Afinogenova: I would recommend them to get outside themselves first, i.e. not just to live inside their head, searching for something new and original, but to go outside and look for it around them. The world is vast, beautiful, and abundant. We must keep our eyes open and let ourselves be astonished and amazed by it. And, of course, attaining mastery is the way to professional and personal freedom.

Irene Kukota: Gallery or museum of your dreams…

Elena Orlova-Afinogenova: Any contemporary art museum in a major city. 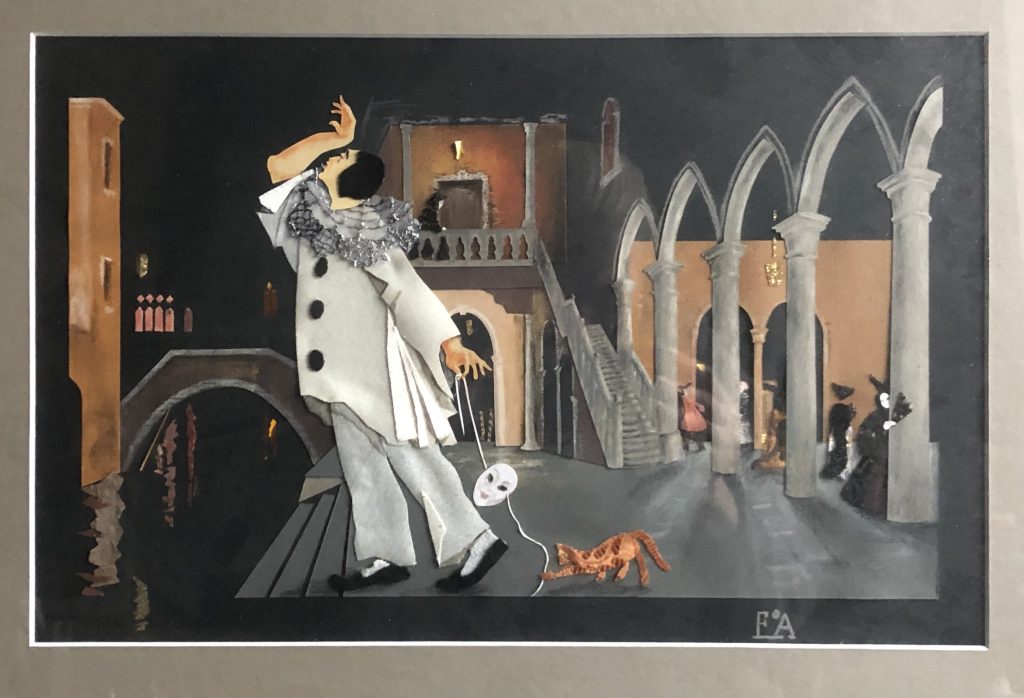 Elena Orlova-Afinogenova, Pierrot and the Cat, 2010, collage on paper

Irene Kukota: In which countries have you exhibited your work? And in what collections can your paintings be found?

Elena Orlova-Afinogenova: I have exhibited in Germany, USA, Great Britain, Spain, France, Denmark, Russia, Italy. Most of my works are in private collections, but some can be found in St. Petersburg museums and in Zerbst, Germany.

Irene Kukota: And could you share some of your artistic plans? Perhaps, something, you are working on?

Elena Orlova-Afinogenova: After I finish one canvas, I usually start working on the next one. I do not like to share what kind of painting I am working on before the time is right; I like to keep it all to myself, while I am still working on something. I believe, many artists are like that.

Talking of exhibitions, I am looking very much forward to my solo show in Magdeburg, Germany, which is scheduled for 2023. It will be hosted by Fabra Ars gallery I have been collaborating with for many years.

I also have plans to exhibit my series Passions According to Mythology in London. The series was recently shown in Germany; it consists of seven large paintings, interpreting various Greek myths.

All images are courtesy of the artist.