Elizaveta Boyarskaya: Acting and Directing is More Than a Job — It Is A Mission 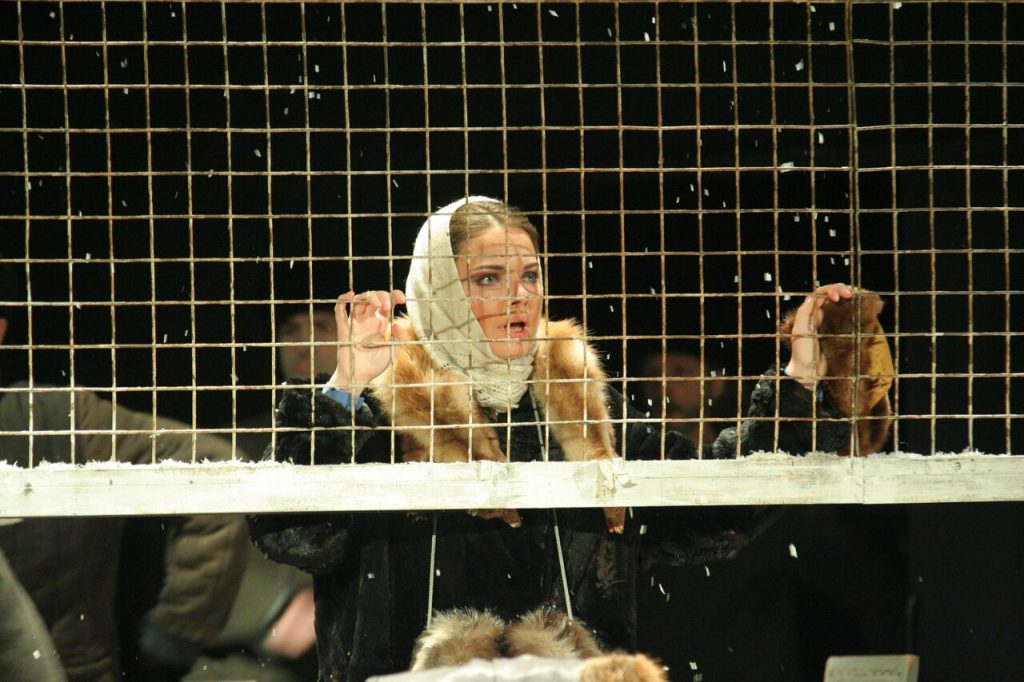 Following the premiere of Vassily Grossman’s Life and Fate at the Theatre Royal Haymarket on 8th May, we met with the young actress Elizaveta Boyarskaya, who plays Zhenya (I sometimes think of her as parallel to Pasternak’s Lara, even though it might be not exactly accurate) — one of the main protagonists in Grossman’s epic novel.

Elizaveta, what does being an actor mean to you? What is for you the essence of an actor’s profession?

Elizaveta: I love my job. I cannot live without it, it gives me happiness. I cannot imagine not to be working. It is a part of my life. Of course, family comes first, but theatre and acting lag not very far behind! What is the essence of our profession – that is a hard one. Every actor gets to answer this question, starting with their first day of studying until they breathe their last onstage. The rub is that you can never achieve perfection in acting – unlike say in ballet or in circus though of course both genres set the bar very high. Acting is all about knowledge – you strike for knowledge of life, of yourself, of human nature, of the laws and levers of this world, you yearn to guess the meaning of everything. Human nature, you study it on all sides, estimating its pluses and minuses, its attractive and repulsive qualities, you learn to accept and love humans for what they are, thus learning to accept life. That’s why an actor might have an easier reaction to life – I don’t get too annoyed with difficult people since I have been schooled to never see people in one dimension only. You tend to look at life expecting it to be multifaceted, you expect it to be completely natural and horribly unnatural, happy and very cruel. It is a fascinating way to live, I always welcome new roles looking for new and unique things in them, and those things invariably resonate with me since I am also just human.

And of course we – actors and directors – don’t just make theatre to feed our egos. We need feedback, emotional exchange with the audience. I strongly believe that acting and directing is more than a job, it’s a mission. Any civilised society needs an instrument of intellectual structuring – theatre is such an instrument. Theatre as reflection of life, theatre as reflection of our epoch, theatre as an immediate assessment of our time.

You grew up in an actors’ family? Would you say it is an advantage – or a disadvantage?

I would say it is both, but honestly — it is a real advantage. You grow up surrounded with theatre and film atmosphere, you get to see the guests of the house: directors, actors, camera men, set designers. Everyone talks endlessly about things which seem rather dull to a child: about theatre, about movies, about plays, about books etc… poetry, literature, music. And of course this affects you and influences your education, your taste. It structures you as an artistic personality, provides you with a great foundation to go on with. By the time I turned 16 I was quite set with views, feelings and capacity to experience art seriously, I was also very emotionally open.

As for disadvantages… well, of course I would encounter the same old prejudices (especially at the very start): she is her parents’ daughter, she must rise to the challenge on her own, she must prove herself to be good enough without her dad’s nepotism.  I used to get really upset and I knew I had to overcome this stigma and so I climbed and climbed uphill patiently. But then I got so taken with studying to be an actor that proving myself stopped being an obsession – I just got completely engrossed in studying. And then in a jiffy we have graduated, and that was it.  Yes, I have a family, and I am a part of it,  but I am also a free agent, each of us in our family is an independent artistic unit. We are an actors’ family, my husband is also an actor, I am an actor in the twelfth generation, it feels completely natural, it is almost fated. And I am proud and happy to carry out an actors’ dynasty.

Is it hard for you to do Grossman’s Life and Fate? The performance obviously takes a lot of dedication and energy on your part. What does this production, this role mean for you?

Is it hard to do Life and Fate? Much less hard now, I would say. We have lived years with this production, it has grown through us, and it’s still fascinating to discover new meanings, new details when we do it – though it seems we know each nook and cranny of this show by heart, we’ve mapped it out emotionally to perfection, but still if for all those years we would just repeat it as it was it’d be deathly dull. Thankfully, the performance keeps developing, it started off as a students’ show – I mean,  acting-wise, because directing-wise. it has been a magnificent overpowering masterwork from the very beginning. However,  we,  the young actors, were students when we opened it,– very conscientious students, but students nonetheless. Now many of us on stage have finally caught up in age with our characters. We have life experience,  so besides carrying out the tasks our director has set us,  we now have our own independent thoughts and feelings about our characters’ life experiences. Yes, of course Life and Fate as any performance takes a lot of dedication and energy. But with almost 30 people on stage in the same time there’s a group, collective energy going on, each of us has to add their own energy to it. The same way as it works in an orchestra: each of us has their own instrument, and a lot depends not only on all of us, but also on each of us. Each instrument has to hit the right note, in keeping with all remarks: piano, crescendo etc. Then we’ll achieve what we are striving for.

The performance is all-encompassing. Grossman’s novel is universally recognized as one of the greatest epics of the 20th century. He’s covering so many themes – humanistic, philosophic, moral, everyday, spiritual, romantic et cetera et cetera. It’s a universe of a novel and as any great novel it deals with the nature of mankind, with the way the world works, with how horrible and cruel we humans are, with how beautiful and merciful we humans are, with how lonely we are and how united we are. It’s about all this. There are so many plotlines, the main one is the story of Shtrum’s family, but in direct parallel we see the concentration camp world – a German annihilation camp and a Gulag camp; we see the military life in the front… I admire our wonderful set designer Alexey Porai-Koshits who has managed to gift us with a space where all of the above can happen naturally and in the same time: tank brigades are starting the battle of Stalingrad, the lights-out siren is blaring at the concentration camp and exhausted prisoners are settling down for the night, political prisoners are perishing from freezing cold in a Gulag, and many people are queuing by the Lubianka prison, hoping for some news of their incarcerated beloved, their family, their husband, their wife; and lovers end up in bed and love each other. All that is happening at the same time. That’s our life, the horror of it and the beauty of it 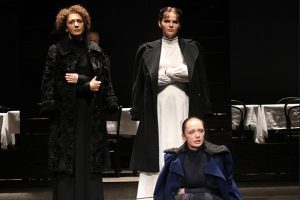 Why among all you other productions your theatre decided to bring to London these to shows after Grossman and Chekhov? What would you like the UK audiences to take away from these two productions?

I think Russian-acted Chekhov is always interesting to see for the Western audiences. The same way, of course, we, the Russian actors, can and do Shakespeare. What we say onstage is great but the text is still a Russian translation – by Pasternak or by Lozinski. We’ll never be able to go on stage and speak the actual Shakespeare’s words since he wrote them in English. The same goes for Chekhov – he is of course widely translated,  but the words he actually wrote putting pen to paper,  he conceived and wrote in Russian. And that is probably what eternally attracts the Western audiences to Chekhov in Russian. The same applies to Grossman,  of course – though Grossman is an entire stratosphere, a whole gigantic chunk of Russian life, of Soviet life, of European history and human life…  Also, we are blessed with a rather good director.

And of course we feel the huge responsibility of performing at Royal Theatre Haymarket. It is such a special place – so many great actors tread those boards, Oscar Wilde opened his plays there – we realise it is a very big deal to be on Haymarket’s stage. And though we are of course not going to make any changes to our productions for playing in the UK specifically – we never do when we go on tour – we’ll of course be extra nervous and extra happy to meet the British audiences yet again.

What I expect from the audience in London… We are bringing over two productions we love so much, they are so important to us, that I am looking for some kind of a melding – of thoughts, souls, pain, joy, mutual understanding. Whatever we act, we are always speaking of humanity, of what it is to be human, what it is to be small and fragile in the face of the all-powerful fate, in the face of the sweeping wave of history. This is what connects all of us, no matter when we live or which country we live at. Yes, historic circumstances differ, yes they used to be and can be still horrendous, but the essence of human condition stays the same and human interrelations stay the same, so I ardently hope that we’ll find understanding in the hearts of souls of the British audience.

If you had an opportunity to work with any British director or actor, who’d be your dream collaboration?

Peter Brook and Katie Mitchell, no doubt about it!