Anyone who has ever watched the 1929 documentary Man with a Movie Camera doesn’t need the explanation why Dziga Vertov has revolutionised the history of cinema. The radical director, or coordinator, as he preferred to call himself, brought new ways of interpreting reality. Transforming the spectator’s perception of everyday life in order to transform life itself. Through film, he meant to contribute to the Revolution.

But what can Vertov tell us, teach us, today? This was the question being asked at the Pompidou Centre on December 20 during the one-day conference organised with Kino Klassika, the Sorbonne Nouvelle Paris 3 Univeristy and the Vladimir Potanin foundation, in relation to the coming publication of a new French edition and study of Vertov’s writings by Les Presses du Réel. 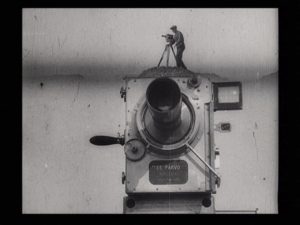 Dziga Vertov, Le Ciné-Œil de la Révolution. Écrits sur le Cinéma, is edited by Antonio Somaini, François Albera (University of Lausanne), and Irina Tcherneva (Ecole des Hautes Etudes en Sciences Sociale), who introduced it over the first session of the day. This new edition, which follows the 1972 one, now out of print, is expanded and supplemented with new texts. It is valuable for tracing whole Vertov’s career through and up until the very final texts, instead of finishing on 1934 with Three Singings about Lenin, as one often discovers it in the literature on the Soviet director.

Most importantly, it includes an incredible number of visual materials included owing to the collaboration with the Austrian Film Museum. The Viennese institution houses the most important Vertov collection in the world: it contains articles, photographs, photograms and diagrams. The latter ones provide an insight into the way Vertov organised his work, i.e. built it through a decentralised network including innovative connections between its protagonists instead of the standard linear and hierarchical production line still often used today.

While the first session was dedicated to the book and the impact of Vertov’s thinking upon a Soviet as well as international cinema until the boisterous arrival of sound cinema in the Soviet Union,  Oksana Bulgakowa (Johannes Gutenberg University) analysed Vertov’s system of notation. Vertov designed it with the aim of preserving his visual as well as acoustic impressions, leading to a new narrative structure. Andrey Smirnov, an interdisciplinary artist, independent curator, collector and author of numerous publications on the arrival of sound, concluded the conference with a reflection on sound and music in Soviet films. This reflection was followed by a conversation with curator and researcher Maria Korolkova.

The day ended with a screening of Enthusiasm: The Symphony of the Donbass (1930) introduced by the new director of Vienna’s Film Museum, Michael Loebenstein. Vertov produced Enthusiasm as the first ‘direct field s 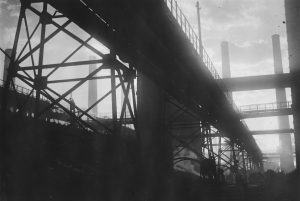 ound documentary film of the Soviet Union’ —  the film that, in Vertov’s words, goes ‘beyond the image in order to convey an idea of Soviet society, of life as it happens’. It was the first sound film Vertov did, he didn’t use sound in the studio but directly captured the sounds of the street: parades, people moving and making noise, as well as the sounds made by factories and machines. Vertov refused to synchronise soundtrack and image in order to create a stronger effect on spectators.

Through avant-garde viewpoints and compositions, the film describes the industrialisation of the country during the first years of the first Five-Year Plan in Ukraine, Vertov’s new artistic home. The innovative treatment of sound associated with Vertov’s idiosyncratic montage techniques really convey the energy and enthusiasm of Soviet workers to contribute to the completion of the State’s objectives. For an hour we were transported  back in time right into the whirlwind of Soviet industrialisation. 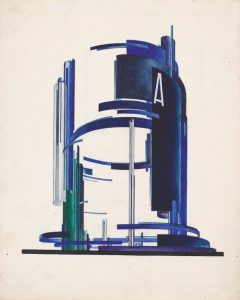 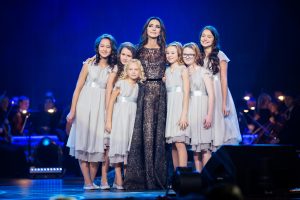