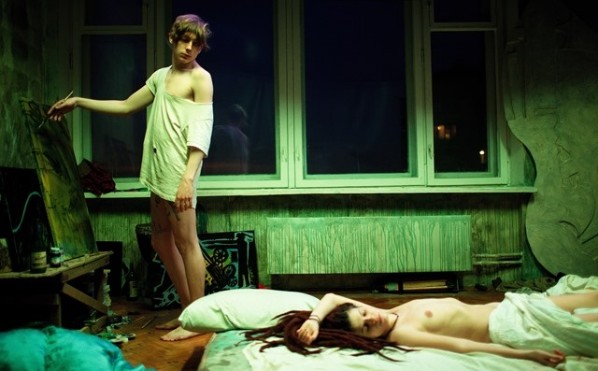 An enfant terrible of the Russian film world, Valeria Gai Germanika is arguably one of the youngest, most scandalous, provocative and successful film directors working in Russia today. Since her first feature film, Everybody Dies But Me(2008), which won the Prix Regards Jeune and a special mention at the 2008 Cannes Film Festival, Germanika’s work has focused on the life of youth in suburban Russia.

Although Germanika’s films are known to explore the familiar territory of coming-of-age teenage years, they uncover uncomfortable truths and jolt the viewer out of his or her comfort zone through the sheer force and abrasiveness of their visual aesthetic and language. Such is Yes and Yes (Da i Da) (2014), a complicated and short-lived love story between a young teacher from the Moscow suburbs and an insouciant, free-spirited artist, and for which Germanika won the Best Director award at the 2014 Moscow International Film Festival.

The screening is a part of The New Social, Calvert 22’s new programme of film screenings and talks that kicked off in October 2015 with the UK premiere screening of Bulgarian / Romanian co-production Viktoria and carries on in 2016 with screening every last Wednesday of the month.

The New Social takes a sweeping look across Russia and the former Soviet republics to uncover how new social identities are being played out on film in the post-socialist era. Last year marked the 25th anniversary of the fall of the Berlin Wall. Twenty-six years have passed since the beginning of the collapse the USSR and east European socialism, yet its remains still haunt the present. At once both repugnant and yet retaining a palpable sense of nostalgia, this past must be constantly navigated in an effort to build and sustain new identities, whether private or public, individual or collective.

The films in this programme, many of which have been picked directly from the international film festival circuit and will be being screened in the UK for the first time, focus on authentic, personal storytelling by emerging and established filmmakers. Often magical, touching and funny, sometimes weird and uncanny, The New Social probes the myriad ways in which these regions – from Hungary and the former Yugoslavia to Russia and Kazakhstan – circumvent the past to create a fresh, new present, and explores what happens when the past refuses to give up its grip and disappear.

The New Social is organised by Evgeny Gusyatinskiy, Olya Borissova and Anya Harrison (more about curators).