Bruun Rasmussen focuses in on art, antiques and jewellery from Russia at a Live Auction in Copenhagen on 10 June at 3pm CET this year. The highlights include a number of art objects that truly lets you experience a piece of history and the strong Danish-Russian relations. You may view the lots here.

“Many of the lots at the auction come from descendants of Danes who either worked in Russia before 1917 or were in other ways had connected with the country. It is interesting to see how these objects have been handed down through several generations in Danish families before they now appear at this auction,” says Martin Hans Borg, Head of the Russian Art and Antiques department at Bruun Rasmussen.

A Jewellery from the Fabergé Master

At the auction, we travel back to 19th century Russia with a decorative pendant from the renowned Fabergé workmaster August Holmström. The pendant, which comes in the shape of an Easter egg and is estimated at DKK 30,000-50,000, originally belonged to the Grand Duchess Anastasia Mikhailovna of Russia (1860-1922). Since then it has been passed down to her daughter, Queen Alexandrine of Denmark, who in 1898 became a member of the Danish royal family through her marriage to Christian X. The jewellery has remained in the Danish royal family until it passed into Danish private ownership between the years 2002-2018.

August Holmström functioned as a workmaster at Fabergé in Saint Petersburg from 1857 and until his death in 1903. During his time with the Russian jeweller, he created pieces such as the “Diamond Trellis” egg given by Alexander III of Russia to Tsaritsa Maria Feodorovna. Apparently, the high-quality craftsmanship in the making of Russian decorative art was passed on to later generations, and Holmström’s son, daughter and grandchild followed in the footsteps of their father and grandfather as jewellery designers and workmasters at Fabergé.

Throughout the 18- and 1900s, many Scandinavians were posted in Russia, from where they brought art objects back to their respective countries of origin. This includes a painting by Vladimir Donatovich Orlovsky, who has depicted life on a Russian farm. The work was acquired in 1910 by Jens Sophus Møller-Holst, who served as Danish consul in Riga. The painting has remained in the family until today and has an estimated price of DKK 100,000-150,000 at the auction. 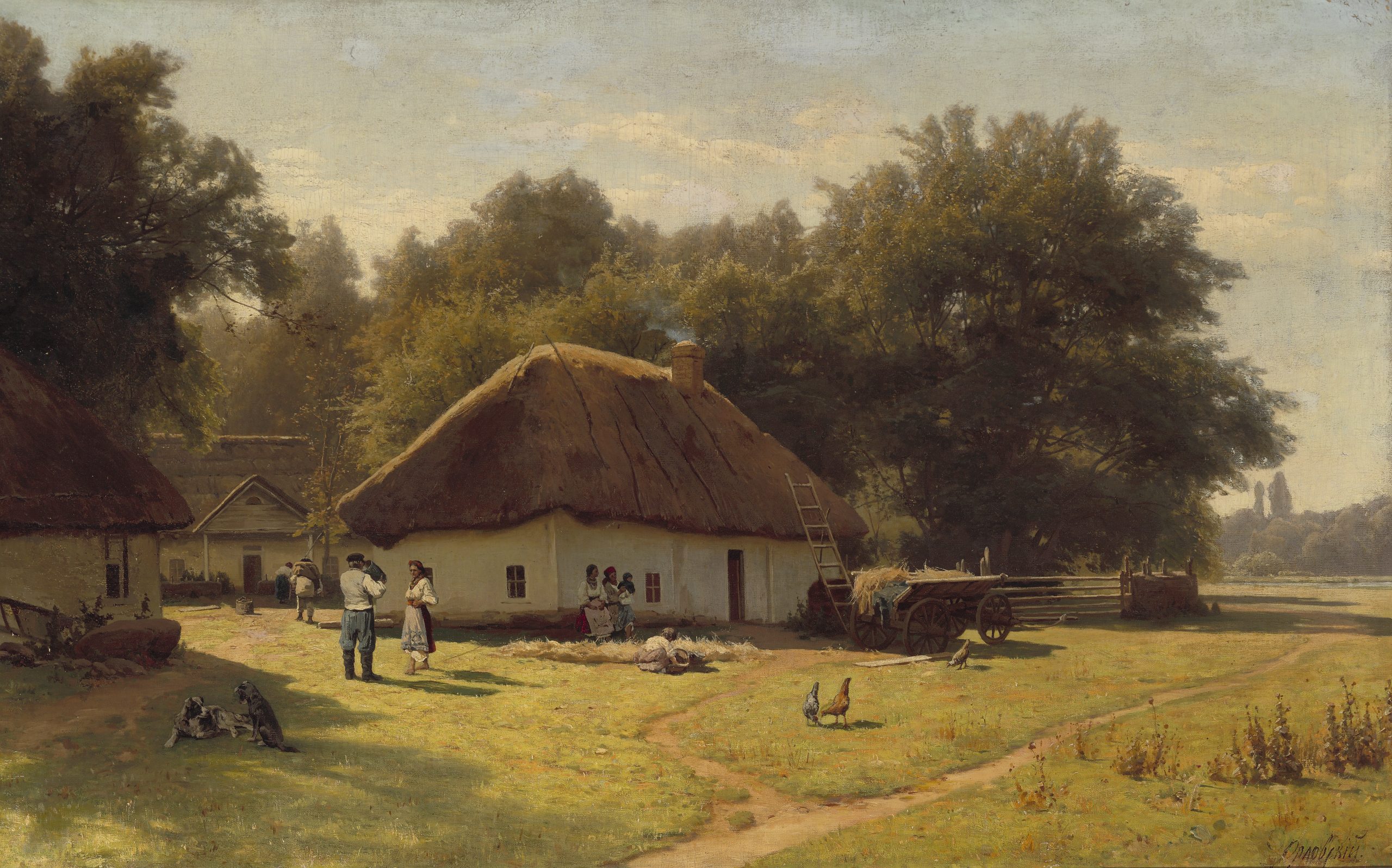 Vladimir Donatovich Orlovsky: Russian landscape with peasants at a farmer’s house in the forest outskirts. Signed Orlovsky (in Cyrillic). 87×139 cm.

At the auction, Bruun Rasmussen also moves ahead to a more recent era with a painting by Leonid Purygin. The mythical beings, the rich colours and the mysterious mood are all characteristic features of Leonid’s almost psychedelic universe, where the interpretive possibilities are limited only by the viewer’s imagination. The work is valued at DKK 100,000.

One of the other highlights of the auction is a photograph of Tsaritsa Maria Feodorovna (1847-1928) taken by Alfred Pasetti at her son Tsar Nicholas II of Russia’s wedding in 1894. 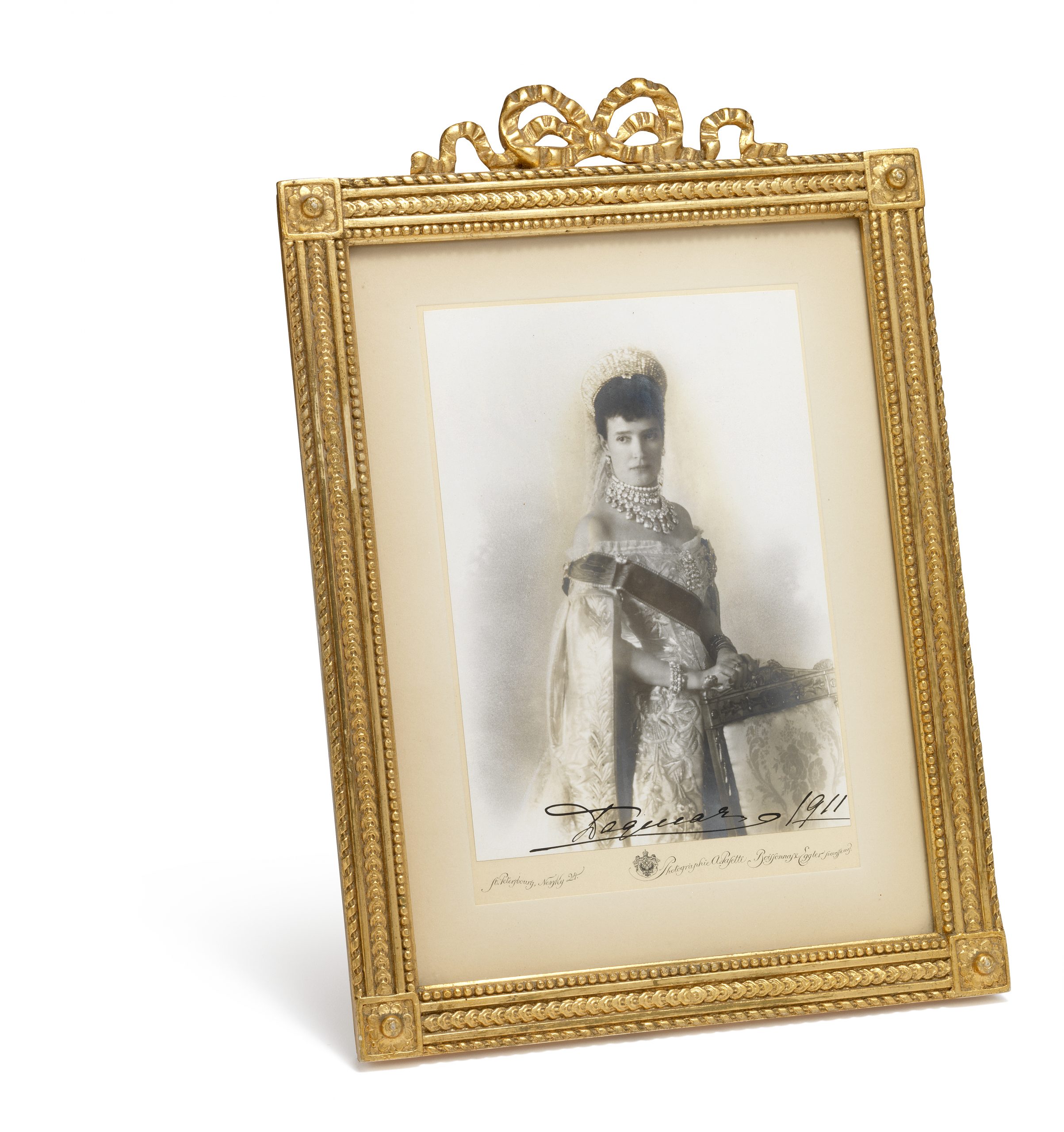 Despite her grief concerning the recent loss of her husband, Tsar Alexander III of Russia, the Tsaritsa surprised everyone with her youthful beauty. Legend has it that several of the guests at the wedding confused her with the bride, and over the years, Tsaritsa Maria Feodorovna gave the photograph as an official gift to people with later dates than on the original. This copy is dated 1911 and comes from descendants of the Danish actress Johanne Louise Heiberg.

In addition to the Live Auction on 10 June, Bruun Rasmussen will also present Russian art and antiques at an Online Auction on 15 June at 5 pm (CMT), where you can bid on a wide selection of silver, porcelain, paintings and collector’s items.