BRODSKY/BARYSHNIKOV: THE ART OF POETIC MEMORY. 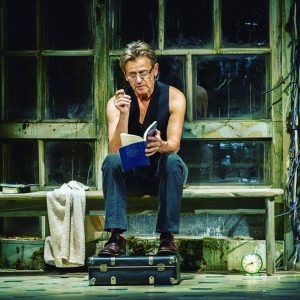 From the cultural perspective, London is an extremely privileged city: the delights it enjoys are unprecedented. Brodsky/Baryshnikov show is one of such rare artistic feasts available to the local litterati. It is a rare occasion when two geniuses so harmoniously meet. What makes it even more precious to the Russian public is the fact that it is highly unlikely that the show might tour  Russia any time soon. Therefore, many admirers of Brodsky’s poetry travelled from Russia to see this performance of amazing power and depth which runs at the Apollo Theatre only until 7th May.

I can only add that those who might have made such sacrifice so as to watch several performances by Mikhail Baryshnikov did not do so in vain: Brodsky/Baryshnikov is a work of genius. And perhaps, to dub the whole performance a “show” is not exactly accurate: it is a revelation.  Baryshnikov is a unique artist with a remarkable gift for refined expression and transformation. His movements and gestures (he particularly isists that he is not dancing during the performance) are suffused with meaning and grace. Just gently moving his finger-tips he manages to  transform himself into a short- lived butterfly, the fawn chasing a nymph, or into a symbolic face of tragedy declining into a farce.  What Baryshnikov and the stage director Alvis Hermanis have managed to create onstage, is an expressive, intense, pulsating Gesamtkunswerk which stays in memory for a long time after the show, repeatedly bringing the lines from Brodsky’s poetry to one’s mind. 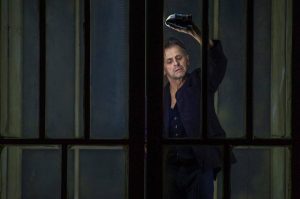 The performance starts with the muted, barely audible sounds of spiritual Orthodox chant. Baryshnikov enters clutching a suitcase, from which he unpacks an old alarm clock, books and the bottle of alcohol.  The wave of sound is emerging out of nowhere. Then against its background one starts hearing indiscernible poetic lines of Brodsky in a gentle whisper. The whisper grows stronger and becomes a living speech. We cross the borderlines from silence to word, making this subtle transition from death to life, and Brodsky becomes alive to us again through his poetry read out aloud by Baryshnikov with subtle dramatic intensity.

The sets are very simple: a dilapidated  and dreamy Art Nouveau pavilion with cherubs and sinuous lines, which, depending on the angle of falling stage lights, becomes a boundary, a Lethe of oblivion, or the Royal Doors to eternity. It evokes a poignant sense of longing and nostalgia. It is a demarcation line between the world of the living (memory, sound) and the world of the dead (oblivion, silence). Depending on the context, it is either an entrancing silent messenger of the Russian Silver Age, so much loved by Brodsky,  or the structure reminiscent of St. Petersburg communal flats with their pre-Revolutionary grandeur and post-Revolutionary squalor.

Having now watched this performance, I disagree – I strongly disagree that it is about death, dying and the old age or fear of death – that would be far too simplistic and literalistic a reading. Through the means of movement, poetry, word and light cues (for the quality of light also plays an important role in this show), the viewers hover between the two worlds: the routine, dim and dull existence with its fear and threat of death and the world of poetic symbols which form themselves from Baryshnikov’s memory. It is the performance about the word, and more importantly, the true intonation with which this word should be uttered and shared with the audience. It is also about an Encounter (in the sense it was meant by Martin Buber or Rilke). 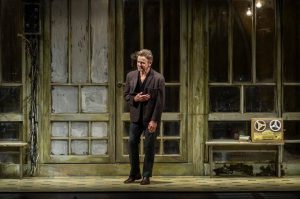 Throughout the performance, Baryshnikov sustains a very serious and trusting conversation with the audience through the poems of his genius friend Joseph Brodsky. At times it seems Baryshnikov is lending his body and memory to make Brodsky live onstage, even faithfully copying Brodsky’s intonations while reciting a poem. This way, he becomes our Virgil, who takes us by the hand and guides through the inner landscapes of Joseph Brodsky’s human and poetic soul. It is a gentle, loving and profound tribute to a dead friend.

Baryshnikov resurrects the poet for whom to be alive meant to resound in his poetic lines. Through word and movement we encounter a man suffering from being exiled from his country and his city, his circle of friends, his memories and his past, alienated and alone. And then gradually in front of the audience emerges a poet of genius, a tormented soul grappling with philosophical questions of existence and struggling to resolve them. Like Brodsky’s butterfly, his poetry is beating its wings against the tragedy and grief, the sorrow and regret for the unfulfilled dreams, hopes and aspirations, the feeling of extreme loneliness, the fear of oblivion ( silence), the fear of the meaninglessness of life and ultimate metaphysical void which annihilates all. Life and Death lead their dialogue and their epic battle through the lines of Brodsky. He is the man condemning the world and demanding theodicy at the same time! And above all this, there comes out a hope for meaning, beauty, God and his presence.

Baryshnikov is regal, refined and ve 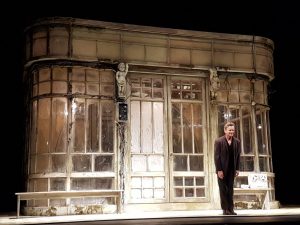 ry informal at the same time. He invites us not only to share the memory of his dear friend and enter the world of Brodsky’s poetry, but also to start engaging with those monumental questions which inspired, disquieted and disturbed the poet in his later life. These are exactly “those damned questions” as Dostoevsky outlined them. During this one-man art performance Baryshnikov appears as a suffering Hiob, a lonely immigrant, a sarcastic middle-aged man,  and a quiet, sympathetic and humble friend who is entirely congenial to what he reads onstage in memory of Brodsky. The final poem is particularly heart- rending as it is a juvenilia of the 17 year old poet who appears to foresee his future destiny. Strangely, the poetry of a young man sounds  as his testament, as if he were saying: I lived to the best of my ability. Live a better and more fulfilling life, if you can.

I personally felt as if I had a chance to meet Brodsky in person. Not the Brodsky hidden between the black and white lines of a printed book, but the Brodsky of flesh and blood, with human weaknesses, failings and contradictions, which he does not attempt to hide.  A complex man: a person whose mind is incisive but whose soul is utterly vulnerable and sensitive. Someone who adopts a somewhat sarcastic and cynical stance in order to stay sane and distance oneself from  the pathos and emotion of his poetry.  This makes his tone not only distanced and understated, but strangely intimate, trusting, bewildered by life, seeking, lost, hopeful.  There lays a huge gulf between the enormity of the question hurled at the universe and the limitations of human powers to grasp and resolve, which nevertheless bring the poet to the realm of eternity. With Baryshnikov’s humble help the viewer has the opportunity to come into contact not just with Brodsky’s  poetry but with its creative powers and the vector fields of the poet’s inspiration — the whole universe of Joseph Brodsky which we briefly indwell.

The tour of Brodsky/ Baryshnikov was presented by the company Bird&Carrot and made possible through the generous support of Norvik Banka.
Below are photos from the reception celebrating the premiere of Brodsky/Baryshnikov. 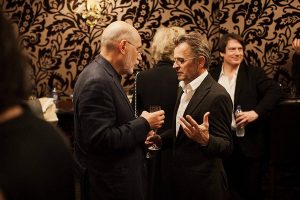 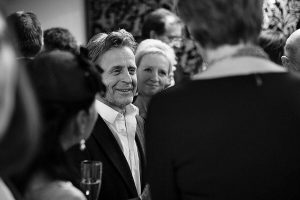