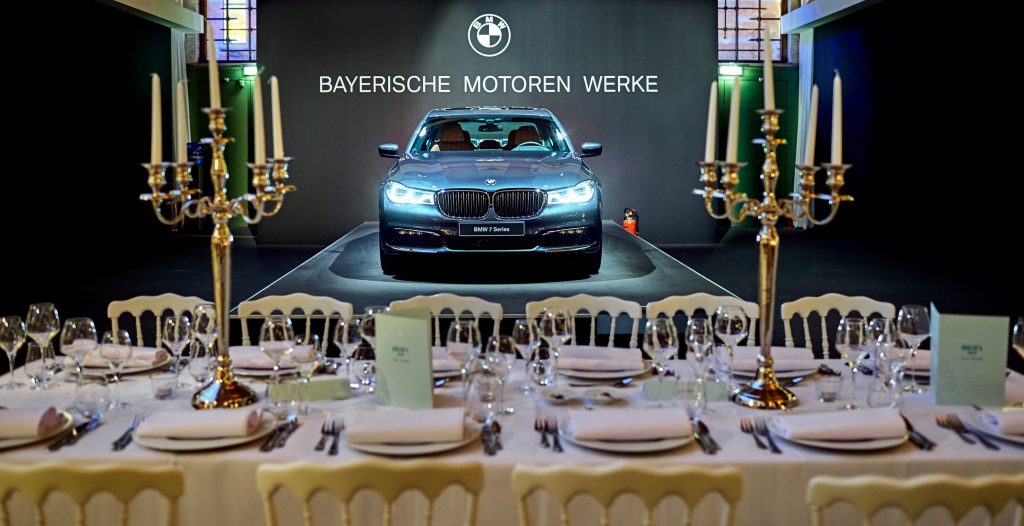 ART ASPIRES TO ETERNITY, and BRAFA doesn’t change. Every year a luxury car is parked in a side-aisle. Every year Philipp Geluck’s comic-strip hero Le Chat smiles smugly at you from the same wall. 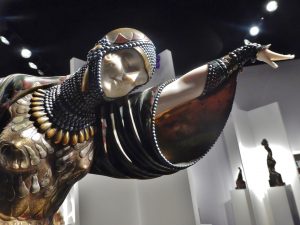 Every year Chiparus Dancers, animal bronzes and a wacky Panamerenko contraption strut their stuff in exactly the same place. And every year the Guy Pieters stand gets bigger and bigger. Soon his brash, belligerent contemporary art (Schnabel Plate Paintings this time) will have annexed the entire fair. 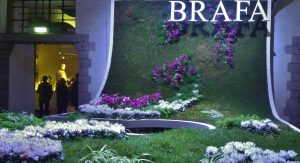 Every year Axel Vervoordt reassembles the same stand, convinced his poverist approach to interior decor will never date. Every year Florence de Voldère scrubs her Old Master paintings as clean and bright as new pennies, then transforms them into visual candy with searing lighting. Every year zany student carpeting does its best to distract visitors from the art on view: the pale greens of this year’s stripy psychedelic weave went well with the dying grass implanted to offset the oceans of pink flowers struggling through the three-day VIP onslaught that precedes the fair’s official opening.

BRAFA President Harold T’Kint, who has put in a solid stint, will shortly stand down after six years in the job. New blood is needed. 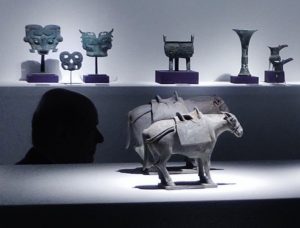 The biggest news at this year’s fair (January 27–February 4) was the return of Parisian dealer Christian Deydier, who last took part in 1995.

Deydier is one of the world’s leading specialists in Chinese gold and bronzes – and one of the artworld’s most colourful personalities. In what amounted to a coup d’état, he overthrew the junta of furniture dealers who had run the Paris Biennale for decades and, as President of the French Dealers’ Association, oversaw the Biennale’s spectacular return to the Grand Palais in 2006 after a 14-year absence. His impact on the Belgian art scene was almost as seismic. In 1995, long before BRAFA decamped from the Palais des Beaux-Arts to Thurn & Taxis and nearly tripled in size, he was one of the first foreigners to take part in what was, back then, an essentially Belgian fair. He turned up in Brussels with 20 French journalists in tow, attracting so much publicity that jealous local dealers vowed never to invite him again. 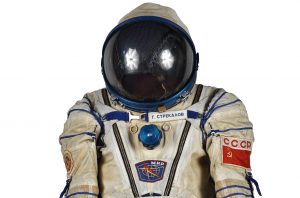 BRAFA these days is far more open to the world: although the majority of exhibitors are from Brussels and Paris, no fewer than 16 countries were represented among the fair’s 134 exhibitors in 2018. There were no Russian dealers taking part this year but, as usual, BRAFA helped organize the visit of a large group of Russian collectors. A number of Russian items awaited them, none more striking than the Sokol KV-2 space-suit worn by Soviet cosmonaut Gennadi Strekalov during the 130-day Soyuz TM-10 mission of 1990. The warm white outfit, formerly in the Forbes Collection (New York), was sold by Italian gallery Theatrum Mundi for a six-figure sum.

Russian artworks spanned the centuries, from an 18th century bone and dyed wood casket with hunting decoration at Gilgamesh, to a chunky glass sculpture by St Petersburg’s Maria Koshenkova, charmingly entitled Pink Rope or The Fifth Wave of Feminism (2017), at Clara Scremini.

There was some outstanding Imperial silver at Dario Ghio (Monte Carlo): an ice-bucket offered by Tsar Nikolai I to his daughter Alexandra on the occasion of her wedding with Grand Duke Friedrich of Hesse-Kassel in 1843; and a silver box engraved with a dedication to Princess Alice of Hesse… from Captain K. Persky of the Imperial Artillery, upon her marriage to Tsar Nikolai II in 1894.

A gilt-bronze mantel-clock attributed to Thomire (Paris c.1795), showing a Chariot of the Young Bacchus led by a pair of goats on a green granite base decorated with signs of the Zodiac, could be had at La Pendulerie. The clock is thought to have been purchased by Tsar Paul I in 1798/9 for his new St Petersburg palace, the Mikhailovsky Castle.

Russian icons from the 16th–18th centuries were on offer at Munich’s Brenske Gallery, back at BRAFA for a sixth time. 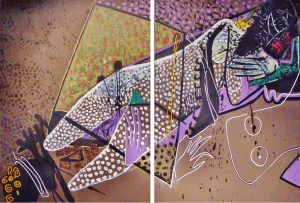 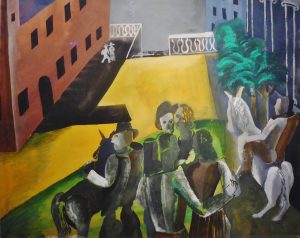 Works by Osip Zadkine ranged from a 1952 ink and sepia Nude Sitting On A Chair at AB to a cement garden sculpture from 1944, at Fleury of Paris, who also had a Zadkine gouache (Les Cavaliers, 1925). Galerie des Modernes had his Femme dans un Intérieur (1927), while Harold T’Kint showed his watercolour Face from the 1950s.

Chagalls were almost as plentiful: late works at Boulakia and Stern Pissarro, plus a 1953 Rider in gouache and Indian ink at Tamenaga. So were Lanskoys (at Hurtebize, Hélène Bailly and Alexis Bordes) and Poliakoffs (at Patrick Lancz, Galerie AB and Harold T’Kint). The work at Lancz was unusual for its large size and mustard yellow palette.

What looked like a Poliakoff was lurking at Whitford, with an atypical cucumber palette. There was good reason for this atypicity. It wasn’t a Poliakoff, it was a Lacasse.

Joseph Lacasse (1894-1975) spent much of his career in Paris, where he inspired and nurtured Poliakoff, who never acknowledged his influence – probably because Lacasse was a far better painter. But Lacasse – who began his professional life as a quarryman – was modest and little promoted and, today, is chronically under-valued. A stunning ensemble of his late work can be admired an hour away from Brussels in his native Tournai where, in 1973, he produced giant canvases for his local bank. The room is now an annex of the Tourist Office, and can be viewed if you insist.

Another star discovery at BRAFA was Pierre-Louis Flouquet with three small but stupendous 1921 works in ink and watercolour works at Patrick Lancz. If Flouquet had been Russian, people would rave about him. The same applies to Lacasse.

Lancz, as ever, had a varied, recherché display of 20th century works. Eugène Laermans’ crayon and watercolour Paysan (c.1916) had a chunky gravitas Millet would have admired. Médard Verbugh’s Sixth Avenue (1930) looked like some Socialist Realist ode to Stalinist Moscow. Spilliaert’s Red Volcano watercolour (1927) shared the same theme as Eppo Doeve’s 1940s Volcanoscape at Victor Werner. Spilliaert – arguably Belgium’s finest 20th century artist – was represented at several stands, though not by any masterpieces.

Roughly contemporaneous, but radically different in mood and style, was a Vermeerish Firmin Baes pastel at Alexis Bordes, Rêve de la Dentellière (1918). A Baes Milkmaid, meanwhile, was on show (not for the first time) at Berko, amidst wallfuls of stomach-churning 19th century mediocrity redeemed, almost, by a quirky Wilhelm Herberholz painting of a Kite.

No fair in the world offers the same overview as BRAFA of 20th century Belgian art, much of which is brilliant but struggles in the international shadows as Magritte hogs the limelight. Magritte was represented at BRAFA by the heavily repainted L’Oracle at Boon. There were loads of better Belgian pictures on show. Constant Permeke, Gustave Van de Woestyne and Valerius Saedeleer would be household names if they had been born in a bigger country: the only international exposure they get comes from Francis Maere and Oscar de Vos at BRAFA. Albert Servaes, Gustave de Smet, Jules de Sutter, Hubert Malfait… the list goes on, and any fan of Russian 20th century art would have felt a kinship with Frits van den Berghe’s 1925 Ace of Spades. 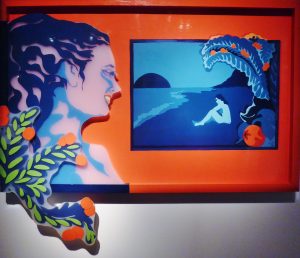 The internationally unknown post-war superstar of Belgian Art is Evelyne Axell, a sort of female Martial Raysse who died tragically young, just 37, in 1972. Her Pop Art can be admired at the Museé d’Ixelles in the Brussels suburbs – if you hurry, because the museum is soon to close for a lengthy restoration. Hats off to Jacques de la Béraudière for wheeling out a masterful late Axell for his spacious BRAFA stand. Since moving from Geneva to Brussels, the chucklebunny Parisian has morphed from Modern Art heavyweight into Belgian talent-scout – witness his quirky 2017 Trophy, in glazed stoneware and porcelain, by Marlène Mocquet. 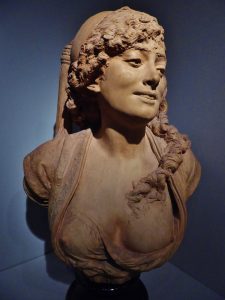 Tribal Art has become one of BRAFA’s strengths, with heavy hitters like De Grunne, Grusenmeyer, Ratton-Ladrière and Quebec’s Jacques Germain all displaying their latest discoveries. Perhaps the most eye-catching display was the wallful of Yaka raffia masks at Didier Claes. A nearby Permeke painting of two tribal masks blended in perfectly.

Old masters, on the other hand, used to be a BRAFA mainstay, but seem to grew fewer every year. Even De Jonckheere, who for many years offered a suave Brughelian face on the international fairs circuit, appear to be morphing into a Modern Art gallery. A 13th century Catalan Virgin at Galerie Bernat was the only Old Master you would have paid to see at BRAFA 2018. 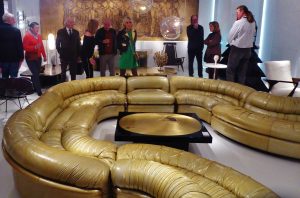 Interior decorators, however, had extremes of choice – from the 18th century opulence of Steinitz to the cool 20th century elegance of Lebeau via the zaniest ‘Sausage’ Settee you ever did see.

The most erudite stand was assembled by the Parisian Alexis Bordes, combining an elegiac Scottish Landscape (c.1878) watercolour by Gustave Doré with a disturbing, anonymous, neo-Art Deco Foyer de la Danse (1948) and a Cross watercolour view of Place de la Concorde during the 1900 Exposition Universelle. This was one of two tiny Belle Epoque bijous at BRAFA – the other being Le Douanier Rousseau’s Femme au Bouquet at Galerie des Modernes. 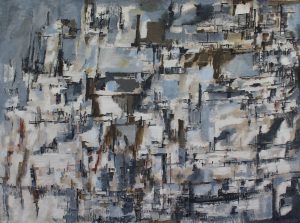