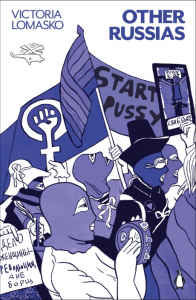 OTHER RUSSIAS is published by Penguin, and has been translated into English by Thomas Campbell. It is available to purchase from Foyles, Watersones, Hive, Amazon & WH Smith. RRP: £16.99

Monograph, graphic novel, modern history book, short story collection – Victoria Lomasko’s latest book, Other Russias, is all of these things and none. The book collects her graphic reportage from 2008 to 2016, bringing the capitals and the provinces, the ultra-nationalist and the liberal, the gay and the straight, the Slavs and the migrants, into one compelling 318 page volume.

Lomasko’s drawing style is at once strikingly simple and immensely evocative. Bold black lines lend the air of the ‘cartoon’, while her attention to detail – from a fold of skin on the neck to the exact contour of a woman’s eyeliner – reminds us that her subjects are very real indeed. With most of the pages featuring a drawing and the accompanying text being relatively brief, 318 pages – although it may sound daunting – go by in a flash. On the one hand, the ‘graphic novel’ quality quickly draws us in to the overarching, and individual, narratives. On the other hand, it invites the reader to rush rather than to reflect. It is possible, however, this is what Lomasko intended. Motivated by a desire to escape the ‘sterile white cube’ of the gallery, her philosophy has always been to portray, and reach out to, ordinary people. The engaging, novelistic, quality certainly breaks the impersonal, academic mode of the monograph, inviting a visceral rather than analytical reaction.

The book is divided into two sections. The first – entitled ‘Invisible’ – documents the lives and stories of Russia’s marginalised from juvenile prisoners to Nizhny Novgorod prostitutes. The second – ‘Angry’ – chronicles Russia’s recent protests from angry truck drivers, opposing punitive tarrifs, to Pussy Riot. The thematic organisation gives each vignette a unique sense of urgency that would have been lost in chronological arrangement. Subsection titles veer between the poetic – ‘Black Portraits’ – to the descriptive – ‘Grassroots Protests, 2015-16’, embodying Lomasko’s fusion of the artistic and the documentary.

While ‘Angry’ highlights Russia’s would-be revolutionaries, it is, in fact, the first section that is a true revolution – at least for Western readers. In Europe and the US, we are well-versed in the stories of Bolotnaya and the three women who dared to take their ‘Punk Prayer’ into Moscow’s most famous cathedral. Indeed, we are guilty of a rather blinkered and Manichean vision of Russian society in which a liberal opposition battles a repressive regime. ‘Invisible’ is a startling removal of these blinkers. ‘Black Portraits’ takes us aboard a suburban Moscow train to hear the pathos-filled vignettes of passengers, while ‘A Village School’ transports us to the isolated provincial village of Nikolskoye from which the locals ‘rarely leave’. These are the everyday Russias: the ones that we and the headlines forget. ‘Black Portraits’ is particularly striking in the way it elevates the ordinary. Allotting each individual figure a whole page, Lomasko forces the reader to ‘listen’ to their stories by raising them from the anonymity of the crowd.

Other Russias offers much for both the general reader and the Russia specialist. For the former, it gives Lomasko’s unique and insightful take on famous events such as the Pussy Riot Trial and the ‘For Honest Elections’ protests. Credit, here, must of course also go to translator Thomas Campbell who expertly preserves the artist’s dry and witty turn of phrase.   For the latter, it provides a rich supplement for the study of social movements, politics, and art. While the price (£16.99) may be somewhat inhibitive for the general reader, the content and style package an immensely complex topic in an engaging and accessible manner.

WHY WE NEED IT

Other Russias is not Lomasko’s first book. In 2012, she compiled her drawings of the trial against curators Andrei Yerofeyev and Yuri Samodurov into a volume entitled Forbidden Art. While Other Russias may not be Lomasko’s first publication, it is certainly the one that has imprinted her artistic stamp outside Russia. On the 7th of June, it picked up the ‘Best Book in Translation’ commendation at the 2018 Pushkin House Book awards. Between then and the publication of this review, she has been flying non-stop from one European country to another for talks and events.

Lomasko’s step onto the international scene is timely. At a time when sanctions, annexation, and take of a ‘new Cold War’ dominate the headlines, Other Russias – as its name suggests – reminds us that there is far more to the world’s largest country than its revanchist regime. ‘Russia’ is not a cartoon-esque monolithic actor, Lomasko shows, but a veritable tapestry of opinions, experiences, and ideologies. There are as many Russias as there are Russians and, in today’s political climate, we would do well do remember it.

Victoria Lomasko was born in Serpukhov, Russia, in 1978. She studied graphic art and book design at the Moscow State University of Printing Arts, and also took classes at the Moscow Institute of Contemporary Art. Since then, she has lectured and written widely on graphic reportage, and exhibited in numerous shows in Russia and abroad. She co-curated The Feminist Pencil (2012, 2013) and Drawing the Court (2010) exhibitions.