Book launch & dance performance: The Sixth Sense of the Avant-Garde: Dance, Kinaesthesia and the Arts in Revolutionary Russia, Calvert 22, 18 May

As part of The Future is Now: Revisiting Revolution, Calvert 22 Foundation is excited to host a dynamic evening of dance to launch the new book The Sixth Sense of the Avant-Garde: Dance, Kinaesthesia and the Arts in Revolutionary Russia by Irina Sirotkina and Roger Smith (Bloomsbury Publishing).

You’ll be introduced to the history of dance and movement among Russian avant-garde artists at the beginning of the 20th century by the authors. Afterwards, you’ll enjoy a performance of original pieces from “Mother of Modern Dance” Isadora Duncan by professional London Duncanist Julia Pond, as well as a short contemporary dance piece. There will be plenty of discussion and drinks to fuel the evening, which aims to paint a vivid picture of the arts in Russia at the start of the Revolution and their intersection with the “sixth sense” of dance.

The touch and movement senses have a large place in the modern arts. This is widely discussed and celebrated, often enough as if it represents a breakthrough in a primarily visual age. This book turns to history to show just how significant movement and the sense of movement were to pioneers of modernism at the turn of the 20th century. It makes this history vivid through a picture of movement in the lives of an extraordinary generation of Russian artists, writers, theatre people and dancers bridging the last years of the tsars and the Revolution. Readers will gain a new perspective on the relation between art and life in the period 1890-1920 in great innovators like the poets Mayakovsky and Andrei Bely, the theatre director Meyerhold, the dancer Isadora Duncan and the young men and women in Russia inspired by her lead, and esoteric figures like Gurdjieff. 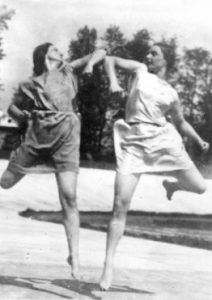 Movement, and the turn to the body as a source of natural knowledge, was at the centre of idealistic creativity and hopes for a new age, for a ‘new man’, and this was true both for those who looked forward to the technology of the future and those who looked back to the harmony of Ancient Greece. The Sixth Sense of the Avant-Garde weaves history and analysis into a colourful, thoughtful affirmation of movement in the expressive life.

Irina Sirotkina is a Researcher at the Institute for the History of Science and Technology of the Russian Academy of Sciences, and she lectures on dance and movement culture at the Higher School of Economics, Moscow. She is also the author (in Russian) of Free Movement and Plastic Dance in Russia and a frequent public lecturer. With Roger Smith, she participates in a studio of “musical movement” in Moscow ‘Terpsichore’, a studio with roots in dance in the revolutionary years.

Roger Smith is Emeritus Reader in the History of Science, Lancaster University, UK and Honorary Fellow at the Institute of Philosophy of the Russian Academy of Sciences, Moscow. He is the author of histories of psychology and understandings of human nature, and he is currently completing an intellectual history of the sense of movement. He likes to walk. With Irina Sirotkina, he lives in Moscow.

A contemporary dance artist based in London, Julia Pond is a direct lineage Duncan dancer who was a member of Lori Belilove’s Isadora Duncan Dance Company from 2001–2005. She studied and performed with Lori Belilove and Cherlyn Smith, and received coaching from Julia Levien. Since 2012, Julia has also received direct coaching in repertory from Barbara Kane and performed with the Isadora Duncan Dance Group London/Paris, most recently at the Kalamata Dance Festival in Greece. She joined the Steering Committee of the Isadora Duncan International Symposium in 2014, and is a co-founder of the Duncan Dance Project. Julia has taught and performed the Duncan work throughout Europe, Russia and the United States, and has created 3 full length dance theater works rooted in the Duncan technique, which have toured to Italy, London and the US. She has also developed class material which fuses core principles of the Duncan technique with a contemporary class structure. Julia is a founding member of the Art Monastery Project and a lead facilitator at LIFEbeat and with PYE Global. She has a BFA in Dance from Boston Conservatory and an MA in International Relations.