“The Lady with the Camelias” ballet performed by the Bolshoi – is out in cinemas across the UK from 1 November 2020. Our contributor Margy Kinmonth reviews the film before the screening.

I’ve always been interested in the historic cultural crossover between Russia and France. Here’s a true mixture of both. A ballet story written and composed in France and performed in Russia.

The Lady with the Camellias, best known in English as Camille, is a story set in mid-19th-century France, written by Alexandre Dumas fils when he was only 23 years old, and published in 1848, with his real-life lover Marguerite Gautier as central character. This story has inspired operas, ballets, plays, books and countless movies ever since. 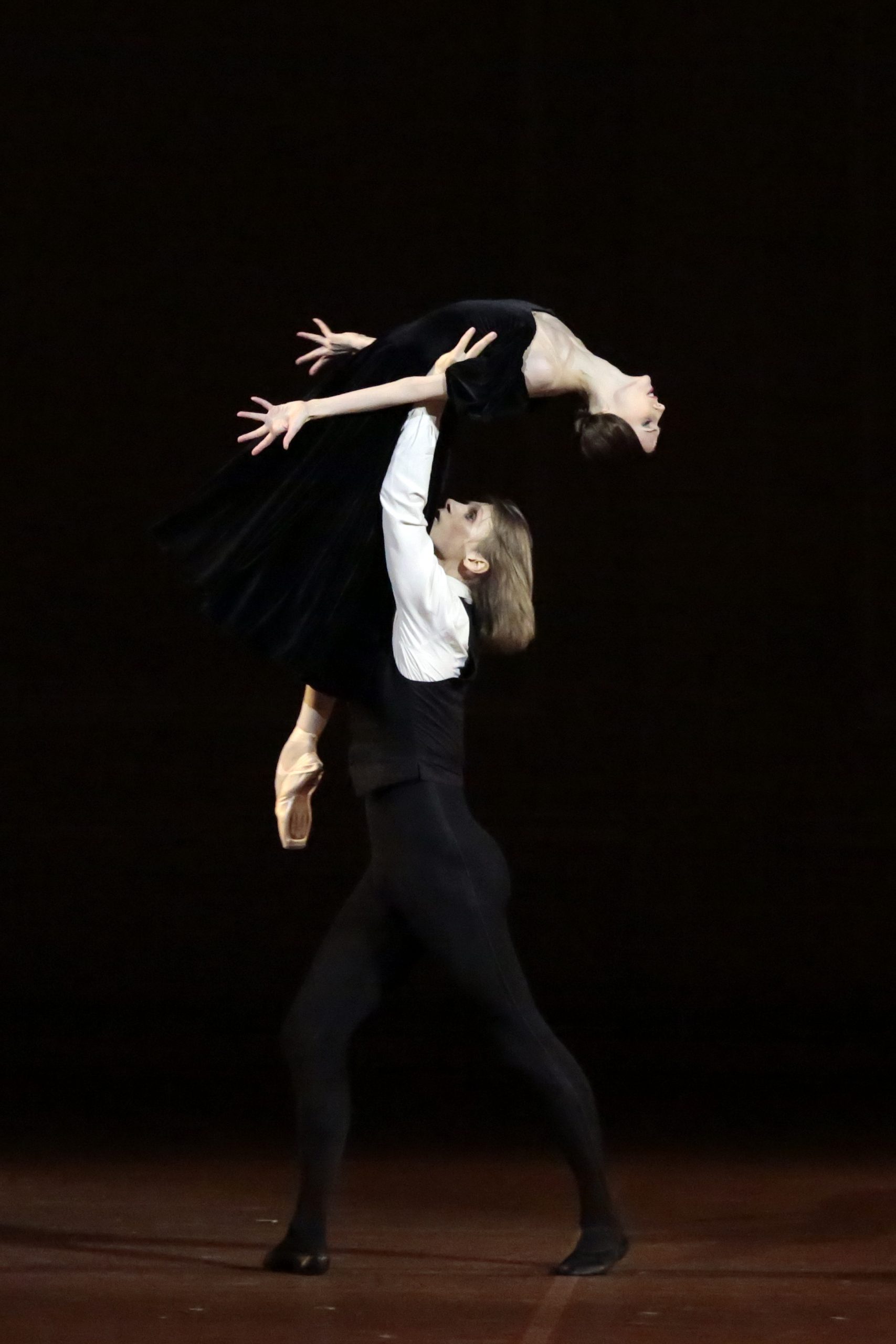 “The Lady with The Camellias”, Svetlana Zakharova and Edvin Revazov, photo by Damir Yusupov

The book tells the love story between a man infatuated by a woman who dies tragically. Armand Duval, a young bourgeois, loves and worships Marguerite – a beautiful, brazen, and expensive courtesan suffering from consumption – tuberculosis, but more likely to be syphilis.  Marguerite is nicknamed la dame aux camélias because she wears a red camellia when she is menstruating and unavailable for making love, and a white camelia when she is available to her lovers.

The book became the famous opera La Traviata (The Fallen Woman) by Giuseppe Verdi in 1853. The ballet was composed by Frederic Chopin, whose beguiling piano notes echo with familiar tunes throughout the story, resulting in a fluid and emotional flow for the choreography, created in a work of rare beauty and emotional depth by choreographer and dancer John Neumeier in 1978.  The ballet follows a non-linear story structure, evolving around a series of memories from different points of view – Armand’s, his father’s, and Marguerite’s. 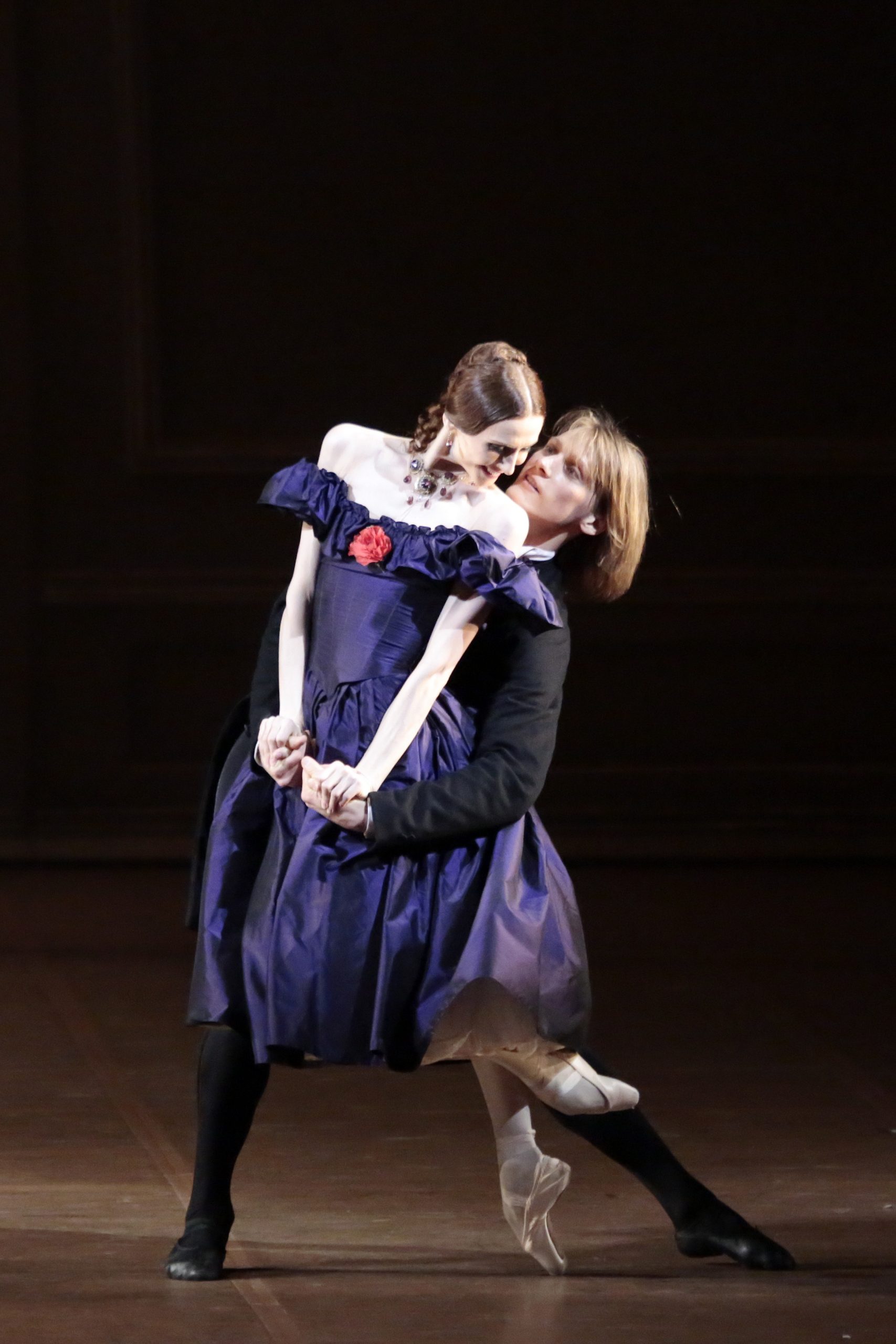 “The Lady with The Camellias”, Zakharova and Revazov, photo by Damir Yusupov

I enjoyed this calming, absorbing fusion of Chopin’s incredible piano score matched with the seamless choreography, which compellingly draws you into the tragic and fatal love affair. Neumeier says “Chopin is such an important figure in the life of 18th Century society. His music is lively and frivolous which aptly illustrates the way of life in “The Lady of the Camellias”.  However, Chopin’s life circumstances, his Polish origin and his own illness, project a sense of sadness and fate in his compositions, which precisely express the theme of the ballet”.

Coming live from the historic Moscow stage of the Bolshoi Theatre, this boldly coloured production doesn’t disappoint. Performed by top principal Bolshoi prima ballerina at her peak, Svetlana Zakharova totally inhabits the character of Marguerite Gautier, a role coveted by ballerinas for its opportunity to create their own authentic and completely unique image. The camera follows Hamburg Ballet’s guest star Edvin Revazov who athletically performs the passionate Armand Duval.

Artistic and pedagogical director Kevin Haigen who created the 1981 version says “the grand pas de deux is a dialogue in which every step, every pirouette and every jump has a meaning. It’s not “dance acting”, it’s dance “being”, giving the artist a chance to inhabit the role and not just to act. The dancers within the roles exist as people, not just as actors. Every step must speak, say and mean something, including the silences, for without the stillness and the silence, there is no voice. Every Bolshoi cast is so different, they are so good as being people, much more than being just dancers. Marguerite is simply defined by her human nature and above all her honesty.” 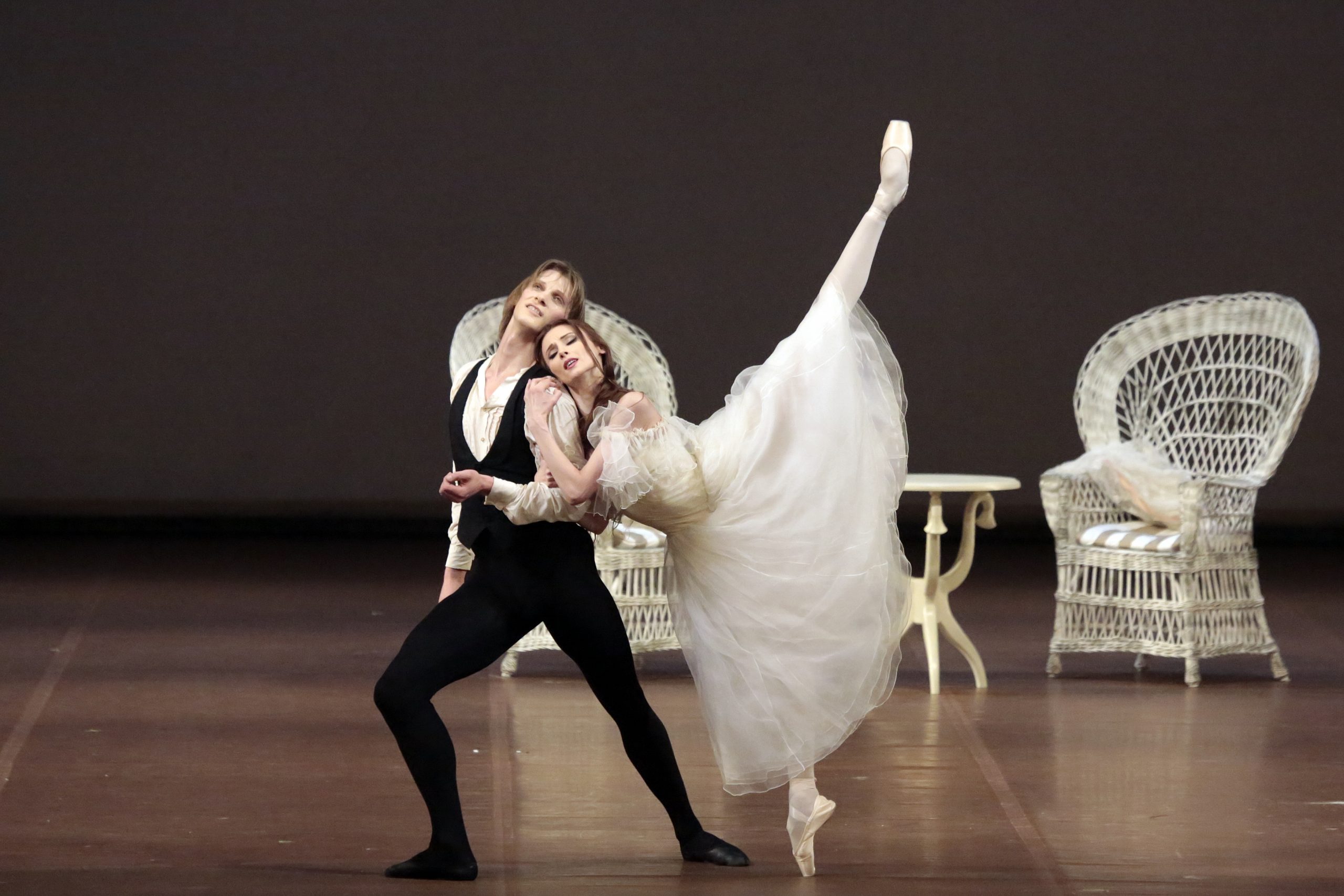 “The Lady with The Camellias”, Zakharova and Revazov, photo by Damir Yusupov

The Bolshoi is one of the world’s oldest ballet companies, founded in 1776 as one of the Imperial Theatres along with Mariinsky Theatre, but it really came into its own and earned worldwide acclaim when Moscow became the capital of Soviet Russia during the Revolution. As a film director, I am privileged to work with some of the world’s best dancers, directing classic Russian ballets, in “Mariinsky Theatre” and in “Revolution – New Art for a New World” exploring dance in a political context.

I can recommend the Bolshoi Ballet’s unique demonstration of what they do best – breathtaking surprise, astonishing gesture and dramatic tableaux – a multi camera big screen experience well worth going out to the cinema for. The production of The Lady of the Camellias will be screening in 100 cinemas nationwide on 1st November, 2020