“The Nutcracker” is surely as much part of the Christmas season as Brussel sprouts, but far more enjoyable.

It’s a beloved tradition, but also vital to the financial wellbeing of ballet companies all over the world. But with this year’s pandemic closures, ballet faces a massive threat, including “Nutcracker” from The State Academic Bolshoi Theatre of Russia presented by Pathe Live showing in cinemas all over the country as a special family Christmas treat starting from 20 December 2020.

I watched many versions while making my film “Nutcracker Story”, which pays homage to one of the world’s favourite fairy tales; it examines the famous story about growing up and asks what it is about Tchaikovsky’s ballet that has made it such an essential part of every child’s Christmas all over the world?

Nutcracker wasn’t always a light and fluffy sweet filled ballet for children. It started as one of E. T. A Hoffman’s dark moralistic fairy tales, riven with sexual undercurrents, long before Tchaikovsky created the music for the famous ballet.

Tchaikovsky found it hard to write Nutcracker, struggling with his own demons – drink, his sexuality, and his untimely and mysterious death soon after the premiere in St Petersburg in 1892. The Russian critics were cruel, and Nutcracker then disappeared, unperformed for decades, until the Americans adopted it as the archetypal children’s Christmas entertainment it is today.

The State Academic Bolshoi Theatre of Russia “Nutcracker” presented by Pathe Live, offers a welcome escape into the toy box. 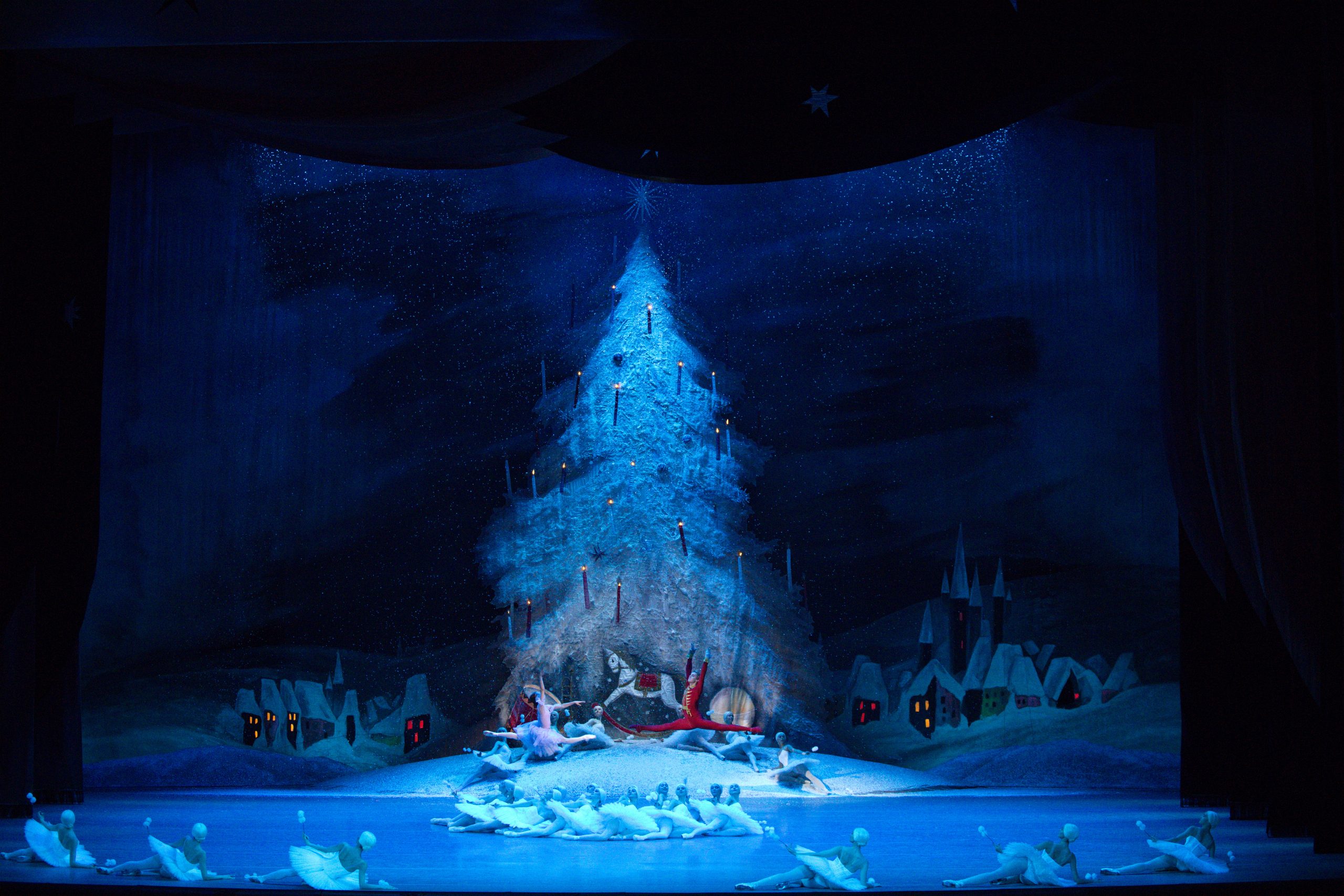 Choreography and libretto are by Yuri Grigorovich (b 1927) the Soviet and Russian dancer and choreographer who has dominated Russian ballet since the Soviet era. He was born into a family connected with the Imperial Russian Ballet, and for decades has been the choreographer in-chief of the Moscow Bolshoi Theatre, helping to establish Russian classical ballet all over the world.

In his 1966 Nutcracker, Grigorovich did not simply narrate a fairy tale. He belonged to a generation of artists who were rethinking the role that art should play in life. He transformed The Nutcracker, which was considered a children’s ballet, into a philosophical parable. His dancers who became known as “the Grigorovich generation” took classical ballet to a new level of virtuosity, in which technical accomplishments of Bolshoi’s reknown acrobatic leaps and breathtaking lifts, became artistic revelations.

Grigorovich understands the music so well, he has the logic of the characters, he is able to embody on stage the full movement of music through the choreography.

Did Tchaikovsky ever imagine when he composed the score that he would inspire so many versions, in its 128 years since the first performance at the Mariinsky Theatre St Petersburg in 1892? 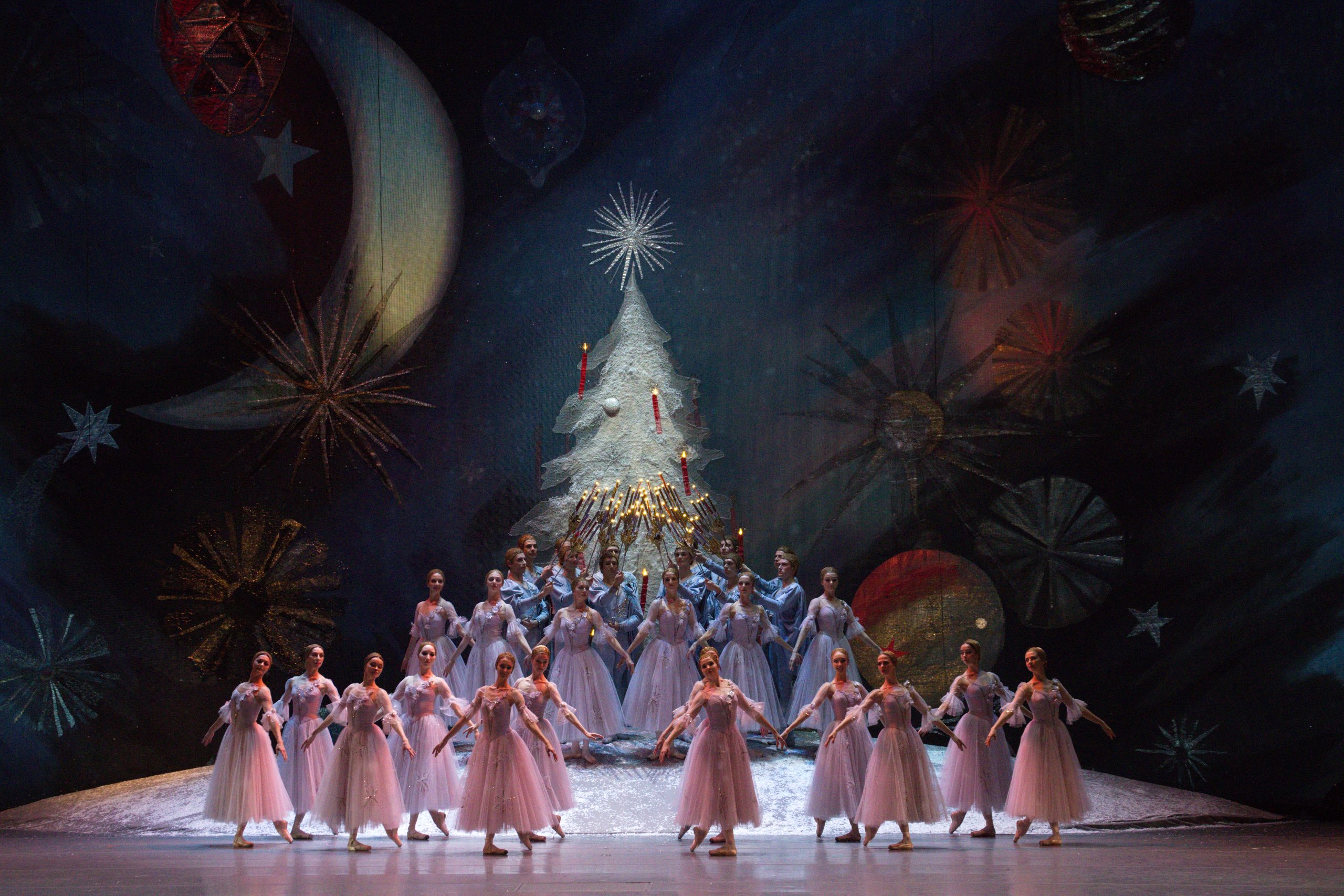 In the 20th century many choreographers were inspired by Nutcracker – from the great classic George Balanchine to the super-avant-gardist, Mark Morris – unable to resist the temptation of plunging into the languorous strains of Tchaikovsky’s music. For some it represented a sweet memory of childhood, for others – attempts to locate a fairy tale in the prosaic hurly-burly of modern life, for yet others – mind-boggling star turns. But there were few who managed to create a choreography that was equivalent to Tchaikovsky’s agitated and infinitely tragic music.

This Bolshoi production is like watching a Christmas card come to life – in the snowflake scene the corps de ballet rotate like spinning tops, skating and skipping on a frozen lake. As the snow falls they become a blizzard of snowballs. The choral voices are always magical, now even more so today, when so much singing is silenced by the pandemic.

In this Bolshoi version you can go behind the curtain in the interval and watch the dancers practising on the stage. The live show generates all the virtual excitement of being at the ballet in Russia, with the loud cheering throughout, you are actually there inside the auditorium of the magnificent Moscow Bolshoi theatre.

The middle act is a long series of tableaux to enjoy. The land of sweets re enacts the kingdom of dreams, where the toys actually come to life. Wind the dancers up and they’ll perform. It’s like being inside a musical box.

The dancers are in the tree, which consists of painted brushstrokes of giant pine leaves and baubles designed by Simon Virsaladze. The Spanish Dolls show off their brash bravado. The Indian Dolls move with its slow precision. The Chinese Dolls in their yellow and duck egg green, leap in a counterpoint rhythm. Pink firecracker Russian Dolls, outdo each others’ jumps while the audience claps in time.

The Fruit and Nutcase tune always reminds me of a certain type of chocolate, here it is performed by a pair of shepherds en pointe, dressed in white, pulling a lamb on wheels, with a big ribbon. Then all the toys get together and link arms in a carefree circular dance. Meanwhile my favourite tune – Tchaikovsky’s melody Punchinello – proves that the answers are always from his own childhood.

Nutcracker is all about childhood imagination, and the opportunity to allow children themselves to dance expressively. Remember the first time you were on stage in the Nutcracker and how it felt? Whether a mouse or toy soldier, I loved filming the children do their own versions, amateur and professional alike, it’s sheer delight watching children perform. And an experience for them which they’ll never forget.

The finale pas de deux is classical ballet at its purest. A duet between stars Semyon Chudin and Margarita Shrayner. More familiar themes, the Sugar Plum Fairy variation, rendered by the unique and inventive sound of the celestia, played by Olgar Sokolova. The steps are delicate and difficult, like dancing on Christmas cake icing. Turn down the lights and watch, as pure magic floods into the frame.

In a tough year for all artistes, musicians and dancers, this show has an extra poignancy. An opportunity to wallow in nostalgia, escape into the toybox and forget the real world for a few magical hours. In this pandemic year, where even snowflakes are socially distanced, this Bolshoi performance shows the blizzard raging on, so forget the nightmare of Covid and enjoy.