Georgia is a country that evokes many mythical and historical associations and yet, paradoxically, is little known in the West. This is partly geopolitical circumstance. For centuries Georgia was cut off from Europe, first by the Islamic caliphate and the Ottoman Turks, and then by Imperial Russia and the USSR. Opportunities for travel there were few.

Our partners are offering an all-encompassing specialised art tour through magnificent Georgia which aims to explore medieval UNESCO World Heritage sites and stunning mountain landscapes. Nestled at the crossroads of Europe and Asia, Georgia is surrounded by the Black Sea, Russia, Azerbaijan, Armenia, and Turkey. Beyond its ethnological and cultural diversity, Georgia offers rich history, biodiversity, architecture, wine and gastronomy.

Long hidden behind ‘the iron curtain’, Georgia has a wealth of hilltop churches, meandering cobbled streets, stunning nature and exceptional wines. This engaging trip which benefits from a small-size group of like-minded people will take you from the beautiful Tbilisi to the lush green slopes adorned with beautiful monasteries.

Price does not include:

*Price in £ may vary depending on the exchange rate on the day when the full payment is due.

PROGRAMME OF THE TOUR 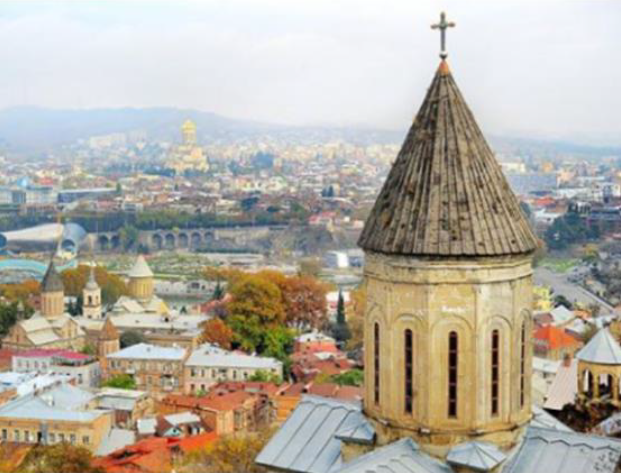 This morning we will drive through the mountains to Kutaisi, where en route we will stop at the Uplistsikhe Cave Town (81 km. from Tbilisi) which dates back to the 1st century a.c. This unique complex included more than 700 caves as well as ancient theatre, bakery and a grand hall built for the visit of Tsarina Tamara. Nowadays around 150 caves and other buildings survive.

After lunch we will drive to Kutaisi – the second largest city in Georgia (after Tbilisi) and will visit the XII century Gelati Academy, built by King David the Builder. For a long time, the academy was one of the main cultural and intellectual centres in Georgia.

Arrival to the Boutique Hotel ”Argo”4*.Free evening in Kutaisi, where we will be staying for two nights.

Today we will the most beautiful cave in the Caucasus – the Cave of Prometheus. Here we will see stalactites and stalagmites, ancient water-falls and dried up rivers. 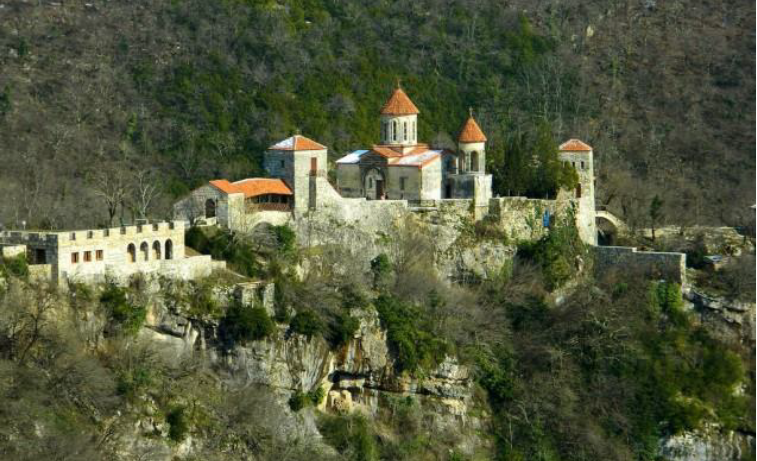 We will then drive to another UNESCO site – Motsameta monastery. It is smaller and quieter than the one in Gelati, although its cliff-edge setting is more spectacular. Built in the VII century, this little monastery has a spectacular setting on a cliff-top promontory above a bend of the Tskhaltsitela River. Extremely isolated and seldom visited by tourists, this place will give you an unadulterated taste of monastic life.

In the afternoon we will embark on another wine trip to Racha and Khvanchkara. We will see most beautiful mountain views and taste the most famous Georgian wines as well as have another unforgettable meal (included in the price of the tour). Return to Kutaisi.

We will depart Kutaisi and drive to Georgia’s most mysterious mountain region, Svaneti – the fabled region renowned for its enchanting stone villages, punctuated by the famous defensive towers, and populated by a fiercely independent race, known as the Svans. 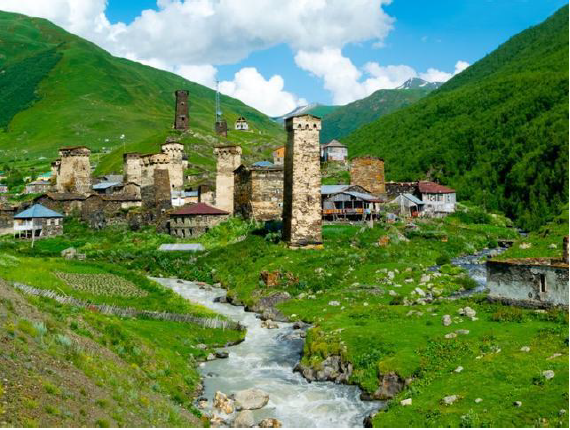 On the way we will stop at the beautiful Martvilli Canyon and the iconic Ingurskaia hydroelectric station. The biggest in the Caucases, it is 271,5 meters high and 728 meters long – the sixths highest hydroelectric station in the world. We will stay for two nights in the capital of Svaneti – Mestia at the Gistola Hotel Mestia. 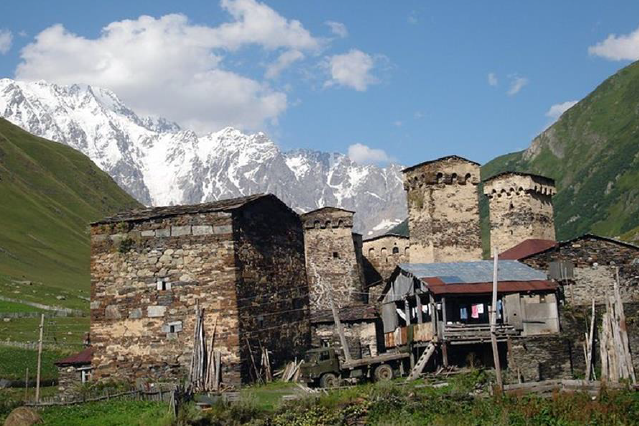 Today we will explore the historic town of Mestia — where medieval towers, built in 8-18th cc await. We will then travel to the UNESCO World Heritage–listed village of Ushguli. At 2200 meters above sea level, it is the highest inhibited village in Europe. We will then return to Mestia.

We will drive to Batumi via Dadiani Palace which is considered to be one of the most eminent palaces in the Caucasus. 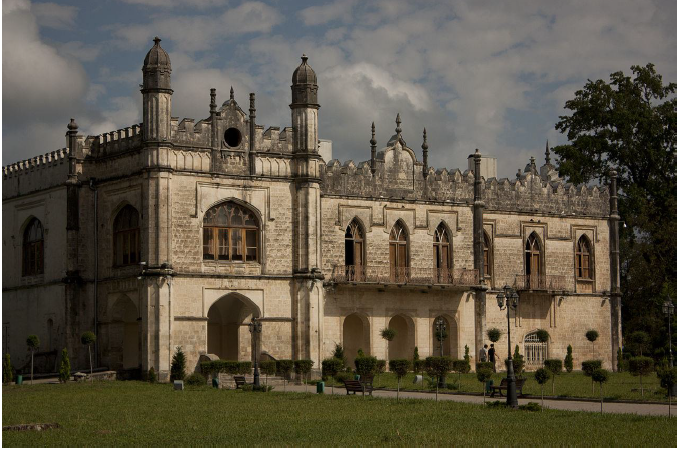 After lunch in the traditional restaurant famous for Megrel dishes, we will drive to the most famous deep water port in the Caucases, Batumi.  We will stay for three nights at the OLD GARDEN Batumi.

We will have a relaxing day in Batumi. The Bathus Limen, or deep water port, of Greek settlers of the 6th to 5th centuries BC was a sleepy provincial backwater under the Ottomans, until the Russians annexed it in 1878. Subsequently international investment brought a railway and pipelines to bring Baku oil to an eager European market. 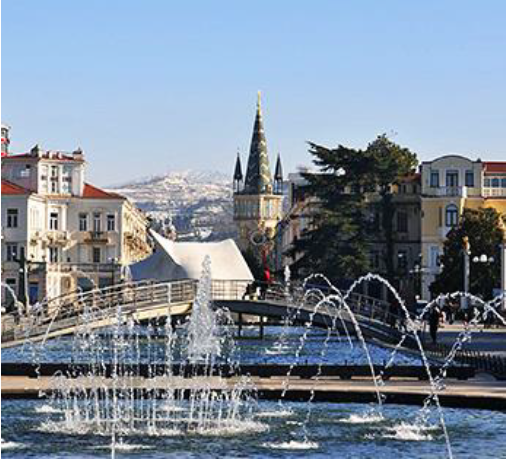 While Nobels, Rothschilds and Mantashev’s invested in Batumi’s oil infrastructure, Stalin cut his teeth organizing their oil workers’ strikes. The elegant 19th-century seafront boulevard is undergoing an investment boom, but the architecture of the first great period of globalization pre-First World War remains, alongside the modern skyscrapers and ‘the singing fountains’.

We will spend a day in Adjaria, officially known as the Autonomous Republic of Adjara is a historical, geographic and political-administrative region of Georgia. 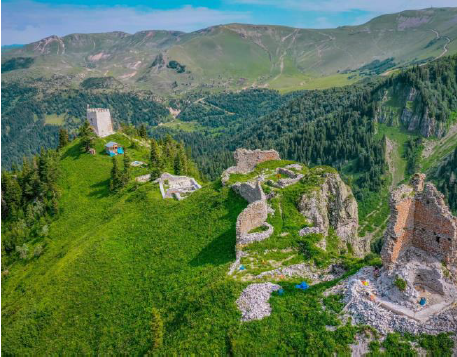 Located in the country’s southwestern corner, Adjara lies on the coast of the Black Sea near the foot of the Lesser Caucasus Mountains, north of Turkey. The story of Christianity is closely linked with this region, since Andrea the First preached Christianity in Adjara for the first time. Adjara was under the rule of Gurieli in XV-XVI century, and was conquered by the Ottomans in XVII century. The population of Adjara was converted to Islam during the period of Ottoman domination, but people maintained Georgian nationality, the Georgian language and Georgian identity.

Today we will visit beautiful medieval churches and waterfalls and will have the farewell lunch at the restaurant famous for local wines and cuisine. In the afternoon we will return to our hotel in Batumi.

Upon our arrival we will have time to explore the capital of Georgia, Tbilisi. 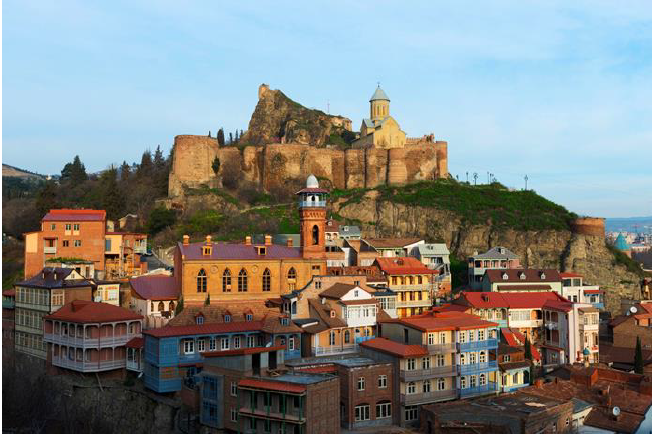 Wander the old districts of the city, which are structured like terraces, and walk through the narrow streets to appreciate the colourful houses, patterned balconies and the historical domed sulphur bath area.

Our evening will culminate with a very special dinner accompanied by traditional Georgian dancing (included in the price of the tour).

Instagram
We are looking for an enthusiastic SOCIAL MEDIA M