I DOUBT THAT LOVERS OF RUSSIAN CULTURE will come across a more unusual book this year than The White Birch: a disconcerting blend of academic thesis and personal travelogue à la Jonathan Dimbleby that transports us from St Petersburg to Vladivostok via Abramstevo, Yasnaya Polyana, Chernobyl and Lake Baikal. 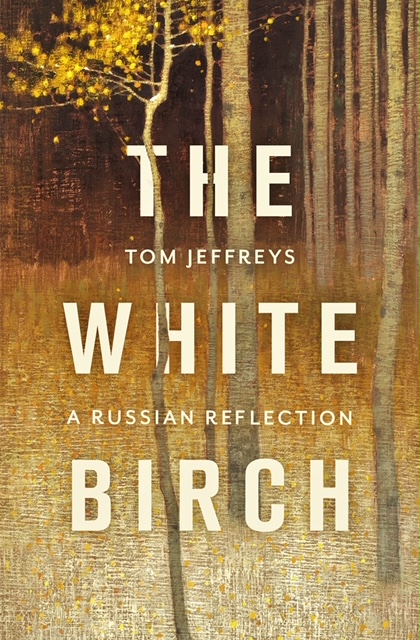 The title itself is disconcerting: I’ve always thought a birch was Silver, however white its bark – much as a horse is Grey not White (unless it’s a Pub). Author Tom Jeffreys eventually addresses the issue on Page 31, informing us that a Silver Birch has ‘rough twigs’ whereas the White Birch’s twigs are ‘downy’ (mind you, he admits that he himself ‘cannot always tell them apart’). Jeffreys does not reveal why he chose the downy-twigged birch for the title of his book. To confuse matters further, the birches on the book’s cover are grey.

I have been to many of the places Jeffreys visits, and met a number of the people he talks to – but not Pussy Riot. I admit to envy, and am sad to learn that their evening together was filled with ‘vile-flavoured vodka to numb the senses’ and that, when Jeffreys bought a jug of the stuff, Pussy Riot glugged it down without a thank you.

Jeffreys is entitled to prefer a pint, but his distaste for Russia’s national drink sits awkwardly with his love for its national tree. He can smell a birch tree a mile off – real, painted, photographed or poeticized about – but seems unaware that vodka and the birch go together like a pie and a pint: walk into any ПРОДУКТЫ and you’ll find bottles of vodka flavoured with birch sap – their labels embellished with birch trees, birch leaves or (На Березовых Бруньках) catkins.

The White Birch is conceived as a personal Russian odyssey by a writer who lived in neighbouring Finland for many years. It is littered with phrases like ‘as I shall soon discover’ … ‘which I shall visit soon’ … ‘a painting I will soon need to take a long, close look at’ … ‘I’m going to have to return to Moscow.’

Although these phrases create a sort of teenage suspense, they portray Jeffreys as gratingly self-obsessed. It is a pity that the wry, self-deprecating humour I enjoyed when I met him on a Moscow press-trip in 2019 struggles to pierce the canopy of leafy earnestness in The White Birch. His text quotes an intimidating array of art historians and academics, who readers are made to feel they ought to have heard of. Daniel Rancour-Laferriere, Emeritus Professor at the University of California, is Jeffreys’ go-to guru, while the book concludes with a three-page appraisal of Through Vegetal Being by Michael Marder, Ikerbasque Research Professor at the Universidad de País Vasco in Vitoria (60 miles south of San Sebastian).

Jeffreys sounds almost messianic when he informs us that it was ‘sitting in the grand top-floor reading room of Edinburgh Central Library that the birches first began to speak to me’ (we later learn the reading-room has a dome). He even presumes readers will be interested in a picnic he has in Gatchina (‘I sit on a bench by the lake and eat makeshift sandwiches of bland white cheese with cucumber and dill. Opposite me in the lake is a little island’), or in the present he bargains for in Novgorod for his wife, Crystal (some socks ‘woven with pictures of swans’).

Jeffreys is not gifted for characterization, and I doubt that any of the people he encounters on his travels will linger in the reader’s mind – with the possible exceptions of the babushka who clambers aboard the Trans-Siberian laden with edible goodies during a half-hour stop at Barabinsk (between Omsk and Novosibirisk), or botanical curator Sergey Kischchenko who accompanies Jeffreys to the VIP Lounge at Cosmoscow to scoff chocolate truffles and slurp free cocktails.

‘Fantastic! I could not dream about it!’ exclaimed Sergey when I appraised him of his appearance in The White Birch – before adding cryptically: ‘I’m ready’ (for a deluge of fan mail, perhaps).

Two of the book’s ten overlong chapters concern Art. Jeffreys’ prime interest, when dwelling on Savrasov’s birch-infested landscape Грачи прилетели, is the correct English translation of the work’s title – usually rendered The Rooks Have Returned. Jeffreys frowns that the word ‘return seems to be an interpretation by Anglophone translators’ but seems unaware that Russian verbs of motion routinely indicate the means involved – on foot, engine-powered or, as here, by wing. A literal English translation (‘the rooks have flown in’) sounds ridiculous: ‘The Rooks Are Back’ is best, but The Rooks Have Returned will do. (A Savrasov rook, by the way, looks like a cross between a pigeon and the sort of blackbird baked in a pie).

Along with careless factual error – Fyodor Vasilyev had been dead for 16 years in 1889, the year to which Jeffreys ascribes his painting After The Storm (a mistranslation of the work’s Russian title После Дождя, After The Rain) – Jeffreys proffers some silly aesthetic judgments. He evokes troops of Russian landscape artists ‘plodding off to the mountains of Switzerland before plodding home again with their plodding paintings.’ Shishkin is accused of ‘airless, near-skyless, claustrophobic intensity’ (even though the sky is present in two-thirds of Shishkin’s forty-plus forestscapes in the Tretyakov) and bizarrely disparaged as ‘technically a very limited artist.’ Arkady Plastov has a ‘scruffy, brushy style’ which, explains Jeffreys, is because ‘noticeable brush marks made visible the labour of the artist – a feature of Socialist Realists.’

As visible brushwork is also a feature of the Impressionists (and Velasquez), I’m not sure I’d have drawn the same conclusion.

Talking of Plastov, it’s a shame that Jeffreys’ travels did not take him to his home village of Prislonika – 30 miles from  Ulyanovsk (Lenin’s birthplace) along a road lined throughout with towering silver birches.

Jeffreys does not always find it easy to stick to his chosen subject – pages 34-40, for instance, contain no mention of birches whatsoever – but, when he does, his eye for quirky detail brings his writing to life. He reveals that a ‘wild grove of 738 birch trees’ was planted at Tsarskoye Selo in 1718 and that, in 1888, a mile-long avenue of birches went up at Gorki, on the estate where Lenin would end his life (sadly, the peripatetic Jeffreys did not make it out to Gorki – last stop before Domodedovo – to check if the avenue is still standing).

I was fascinated to learn that birch tar is used for protecting wooden houses; that bandages in Yakutia are made from heated strips of birch bark; that a 13th century Novgorod boy called Onfim made pictogram figures with ‘rake-like hands’ on birch bark ‘manuscripts’ known as beresty; and that the birch-rod was legally wielded on the Isle of Man until 1971. A ‘birch-bark mile’ was ‘the distance you could walk in a pair of lapty (sandals made from birch-bark fibre) before they needed repairing’ (‘it is worth remembering that Russia is a big place’ notes Jeffreys helpfully).

Jeffreys describes, and sits on, the birch-log bench (or its successor) that Tolstoy had installed at Yasnaya Polayana, but surprisingly declines to throw in a birchy quote from War And Peace (where we read of ‘birchesstudded with sticky green leaves’ interspersed with ‘small fir-trees with their coarse evergreen, an unpleasant reminder of winter’).

It’s interesting, if hardly à propos, to learn that Catherine the Great’s ‘two great passions in life were English gardens and her grandson’ (as opposed to Power and Sex). I’m pleased to hear that Tchaikovsky’s Fourth Symphony quotes the folk song ‘A Birch Tree Rustled in the Field’ (so, incidentally, does Balakirev’s Overture on Themes from Three Russian Songs) – even if it’s leaves that rustle, not trees. (The song’s Russian title issimply Во поле берёза стояла – ‘In The Field Stood A Birch Tree’).

Forests covered 56% of Russa in 1696, but just 30% by 1914 – with evergreens heavily replaced by aspen, alder and birch. So there. Quoting Stephen Brain’s 2011 Song of the Forest, a study of ‘Stalinist Environmentalism,’ Jeffreys accuses Communist forestry policy of being ‘exploitative, short-sighted and utterly irresponsible. In 1930 overlogging was widespread.’ Jeffrey’s background reading must have been eye-tingling: the book ends with an 11-page bibliography.

Several of the books Jeffreys quotes from sound worth reading, including Keith Gessen’s A Terrible Country (2018) about a Russian-born American returning to Moscow after a thirty-year absence. This has birches on the cover and a first-person narrative; both, I suspect, influenced Jeffreys.

The finest writing that Jeffreys alerts us to is by Trotsky’s niece Vera Inber who, on a train shortly after the Nazi invasion of 1941, passes through ‘dead woods, the earth scorched by explosives’ and sees the ‘bark of a small birch tree’ whose ‘dots, stripes and spots’ make her think of shorthand – recording ‘the whole history of its life, cut short in mid-sentence.’

Wow – that’s writing (even in translation).

The White Birch builds to its eureka moment when Jeffreys follows an old woman out of a bus on Russky Island (sic) south of Vladivostok. ‘I watch as she climbs out of view’ reports Jeffreys. ‘I take a piss and then climb the same steps.’ At the top he comes ‘face to face with some of the most extraordinary birches I’ve yet seen. I think they are betula ermanii, stone birch, but later I wonder if they’re not perhaps betula platyphylla, Japanese or Siberian silver birch, or in fact betula dahurica, black birch. I don’t know.’

And we don’t care – though Jeffreys could probably make his fortune designing an app that tells you a birch’s Latin name if you point your iPhone at it.

Readers are reminded that ‘birches are part of our world and we are part of theirs’ – and admonished that ‘this should not be forgotten.’ Alas, by the end of this 330-page tome, some readers may find their own passion for birch trees starting to sag, and wish Tom had chosen to write about something more exciting, like the Giant Hogweed (which originated long ago in the Russian hills, as we know from Genesis).

The White Birch, in its current form, is one almighty chew – and extremely arduous to navigate in the absence of an Index. Yet Tom Jeffreys’ diligent and offbeat research merits an audience. His text warrants editing, shortening, and its first-person narrative revisiting; there is a significant book inside waiting to get out.