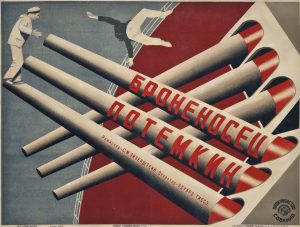 ted to offer our readers the article by the outstanding British film scholar Professor Ian Christie. He firmly believes that in  this year of commemorating the Russian revolutions of 1917, the role of cinema in bringing a message of revolution deserves to be reviewed. ‘Say Potemkin, and it appears the whole British Army will go down one after another like ninepins’. So wrote the novelist and pioneer film critic Bryher in 1929, poking fun at the British establishment’s hysterical response to the threat posed by importing Sergei Eisenstein’s already notorious film. The Battleship Potemkin would in fact remain banned from public exhibition in Britain until well after World War Two, although this didn’t prevent it being widely shown through trade unions and other Left-wing networks. If anything, the censors’ ban confirmed that Potemkin still had the power to arouse and inspire. When the young Sergei Eisenstein was given a chance to celebrate the anniversary of the failed 1905 revolution, he already had a reputation for provoking audiences with his theatre productions. His first film, The Strike (1925), gave a text-book anatomy of how a factory strike over a worker’s victimisation could escalate to full-scale battle between police and strikers, ending with shocking images that compared the workers’ massacre with an abattoir. After Potemkin, in which the peaceful Odessa crowds are also savagely attacked on the great staircase above the port, Eisenstein described his method as ‘kino-fist’ – contrasting this with Dziga’s Vertov’s observational ‘kino-eye’. 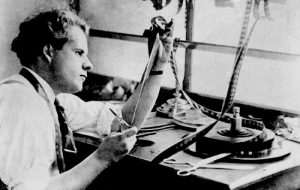