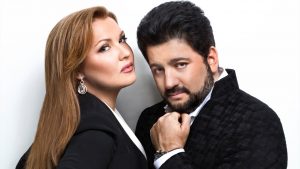 Anna Netrebko is a soprano who has ‘redefined what it means to be an opera star’ (Berin Art).  Yusif Evayzov is a tenor whose voice ‘reaches us in a way that no other sound does’ (L.A. Times). With a plethora of credits from the world’s greatest opera companies, from the Metropolitan Opera to the Bayerische Staatsoper, Anna Netrebko and Yusif Evayzov’s much anticipated concert at The Royal Albert Hall was nothing less than a vocal extravaganza.

The programme, arranged chronologically from Verdi to Giordano, was carefully crafted around the rich, dramatic arias that Netrebko and Eyvazov perform so brilliantly.  The audience was treated to duets from operas that the husband and wife team have starred in together, such as Tosca – for which the couple won unanimous acclaim in New York – and Andrea Chenier in Milan.  The one fault with the programme, however, was that it lacked a unifying theme.  Designed to showcase the performers’ vocal flare rather than to provide a narrative experience, each piece felt like a self-contained concert, rather than part of a dramatic whole.

It is a testament to Netrebko’s reputation as a performer that she was able to win over the RAH’s 5,000 strong audience before even opening her mouth.  The soprano’s glittering charisma was visible from the moment she walked on stage.  Perhaps the defining feature of Netrebko’s virtuosity is simply that she so clearly delights in her craft.  From Strauss’s bubbling ‘Ceclia’ to Catalani’s ‘Ebben… ne andro Iontana’, she  performed with her trademark confidence, making even the most complicated vocal passages seem simple.  Her rendition of Marfa’s Aria from Rimsky-Korsakov’s The Tsar’s Bride – a staple on the Russian opera scene but rarely heard in Western repertoire – was a highlight of the evening, and an appropriate nod to Netrebko’s roots. 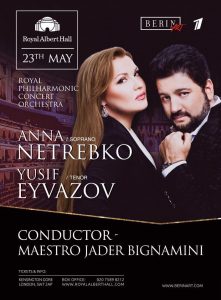 Although himself an internationally sought-after tenor, Eyvazov has always struggled to establish his own presence as separate from that of his superstar wife.  In Part I of last night’s concert, which saw the duo perform multiple arias and duets from Verdi’s Ottelo, Netrebko was clearly the star, while Evayzov’s performance paled somewhat in comparison.  By the end of Part I, however, and throughout Part II, he grew into his own and his stage presence brightened, allowing us to fully appreciate his talent.  His final aria, rather predictably, was none other than ‘Nessun Dorma’ from Puccini’s Turandot.  Any tenor who sings this does so in the long shadow of Pavarotti, but Evayzov gave a masterful performance that displayed extraordinary vocal resonance.

The Royal Philharmonic Concert Orchestra, masterfully conducted by Bignamini, was, of course, the third star of the evening.  Orchestral interludes included the Polonaise from Tchaikovsky’s Eugene Onegin and the overture of Verdi’s La Forza del Destino which rightly elicited thunderous applause.

As any performer will tell you, no two shows are ever the same.  But Netrebko and Eyvazov’s concert brought new meaning to that old adage when they invited the Ambassador of Azerbaijan on to the stage who presented them with the country’s highest orders.  Evayzov received the title ‘People’s Artist of Azerbaijan’ while Netrebko was given the ‘Order of Friendship’.  The announcement of the honours had been made three days prior on the Instagram accounts of both singers.

After dazzling their London audience, the next stop on Netrebko and Eyvazov’s tour is Germany’s Carmen Würth Forum where they will perform on the 26th of May.