Anna Andreeva and her experimental designs

Textile has always been an important tool in cultural policy and the increase of interest to this art significantly grows when political and social changes take place. Textiles are used everywhere, from monumental street designs for parades and political festivities to intimate interiors, furniture and, last but not least, our clothes. While sometimes textile design can be rather neutral, it also can be politically and ideologically charged. Investigating the production and use of textile can reveal a lot of unexpected stories which differ from the mainstream narration of history. One of the most intriguing study cases is the recently opened private archive of the Soviet textile artist Anna Andreeva.

Looking back at the development of Soviet textiles we can track its intensification during the important turning moments, such as the October Revolution of 1917 or significant cultural and political changes introduced in the 1960s by Khruschev. This decade, marked by the revision of Stalinist policy, the end of the cult of personality and the beginning of certain liberalizations later became known as the period of Thaw. In arts this time is sometimes referred to as the second wave of avant-garde as it was characterised by the slow revival of the interest and awareness of the historical Russian avant-garde and the beginning of some artistic experiments. However, the 1960’s was also the climax of the Cold War with State censorship and control still in place affecting the whole art scene as well as design and production of textile. It was in this decade that Andreeva’s work received a great deal of attention both at home and abroad. 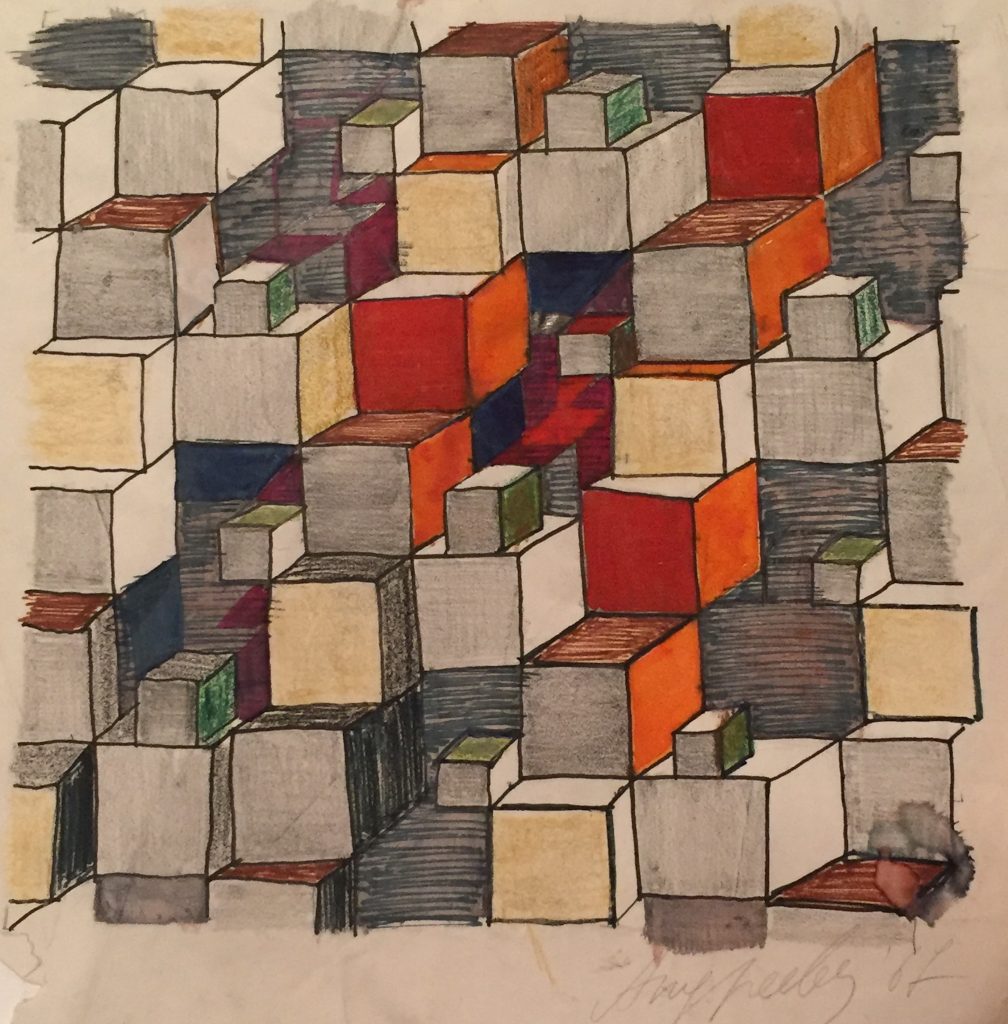 Born into a wealthy family in Tambov in 1917 Anna Andreeva (maiden name Prasolova) was forced to leave home at the age of seven. Following the October Revolution her parents were repressed and their family house was expropriated by the Red Army. Andreeva moved to Moscow where she stayed with distant relatives, attending school and later the Textile Institute. In 1941, at the start of the WWII she was admitted as the young promising artist to the prestigious Krasnaia Roza [Red Rose] silk factory, the flagship of the Soviet textile industry. Located in the center of Moscow, it was the oldest and the most progressive silk weaving factory established by Claude Giraud, and renamed in 1919 after the revolutionary leader Roza Luxemburg into Krasnaya Roza. Not only the factory invited talented young artists, but also facilitated their creative and personal growth.

In a postcard from the Front to her husband, the dissident and the scientist Boris Andreev, Anna Andreeva wrote how lucky she was to be in the epicenter of the artistic life, modernist views and the technological innovations. However, due to the war she had to stop her work and was evacuated to Central Russia. By 1945 she had returned to Moscow and became one of the leading artists of the Red Rose. 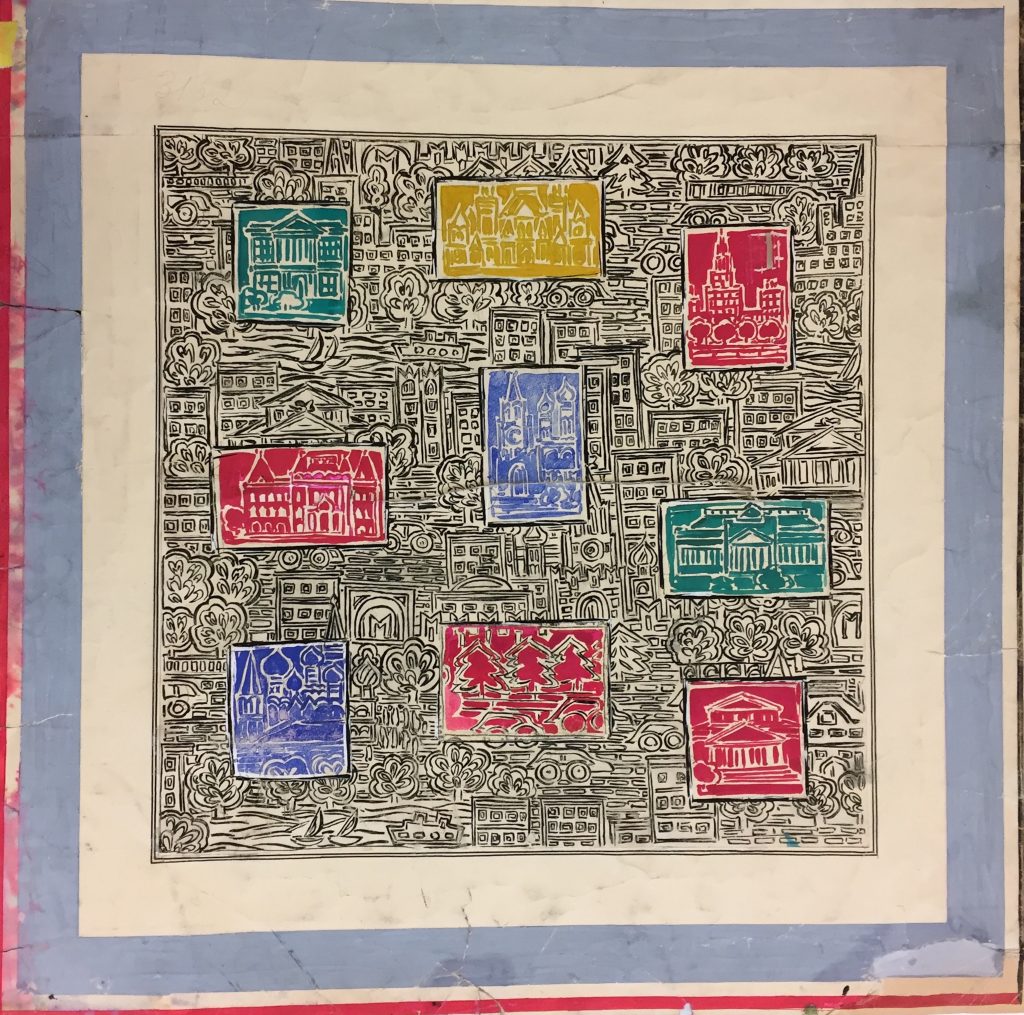 The modernization of the country in the post-war period and the desire of the State to demonstrate its success meant that textile products not only had to correspond with the international standards, but also be of good enough quality to be presented at the international competitions, such as the International Exhibition in Brussels 1958, the EXPO`s in Montreal in 1967, and Expo in Osaka 1970. Moreover, Moscow welcomed guests from all over the world and the authorities were keen to make a good impression, to show to foreign visitors that the country was in tune with all the trends and developments and produced high-quality fashionable items. This required not only the technological innovation, but also the raising of the designers’ awareness of contemporary tastes and fashion. The Thaw was the period of the raising of the Iron Curtain, the time of renewal, the improvement in international relations, expansion in the fields of information and aesthetics, and this was reflected in the development of the textile industry. 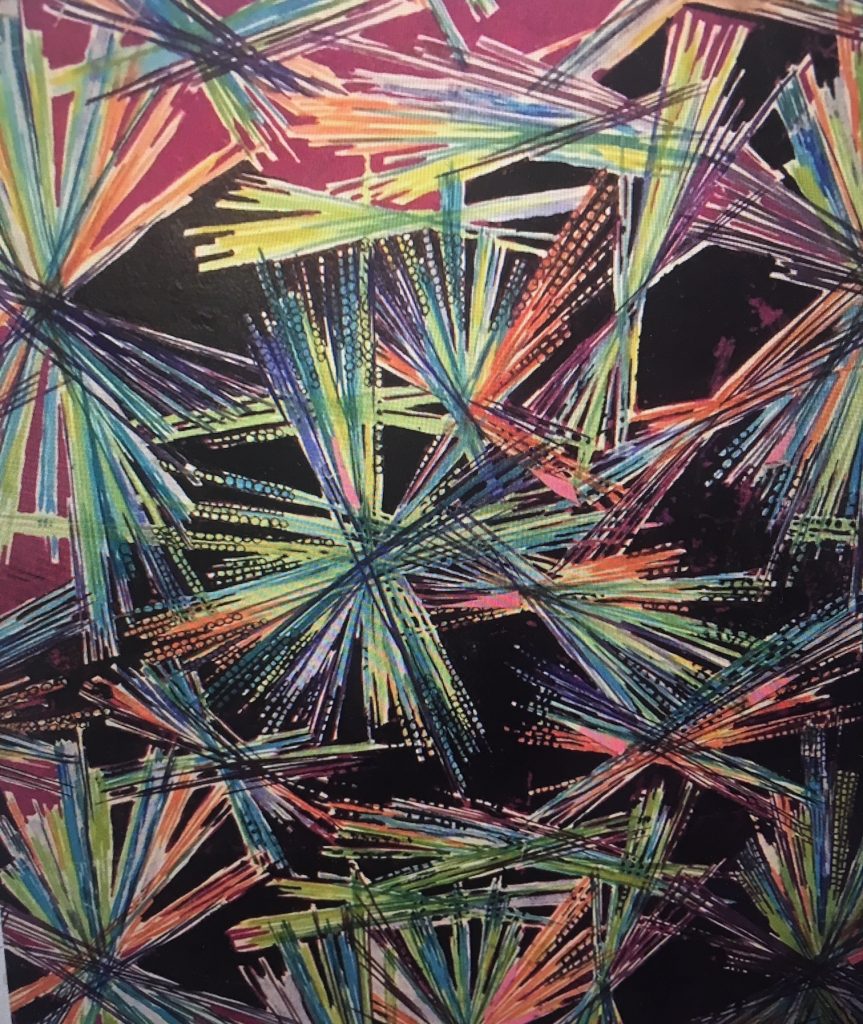 Textiles started to play an important role of the cultural bridge between the West and the Soviet Union.  For example, designs for silk prints developed at the Red Rose factory were purchased by Western fashion houses. Moreover, Red Rose was commissioned to produce special souvenir shawls for the leaders of the Socialist Bloc and Westerners visiting the USSR. One of the most outstanding examples of the Red Rose’s contribution to the development of the cultural diplomacy was the Soviet delegation to the UK in 1961. It was the first visit of Soviet officials since the fall of the Imperial Russia and was aimed to celebrate the first human in the space. In preparation of Yuri Gagarin’s visit to London, Anna Andreeva received a direct order to create a commemorative design that the cosmonaut would present to the Queen.  The result was a silk scarf printed in black and gold featuring the elements of Space, such as floating sputniks, stars, comets and rockets next to the inscription – Glory to the First Soviet Cosmonaut. The print diverged in style from the canons of the dominant style of Socialist Realism and was at the time considered radical and even risky. 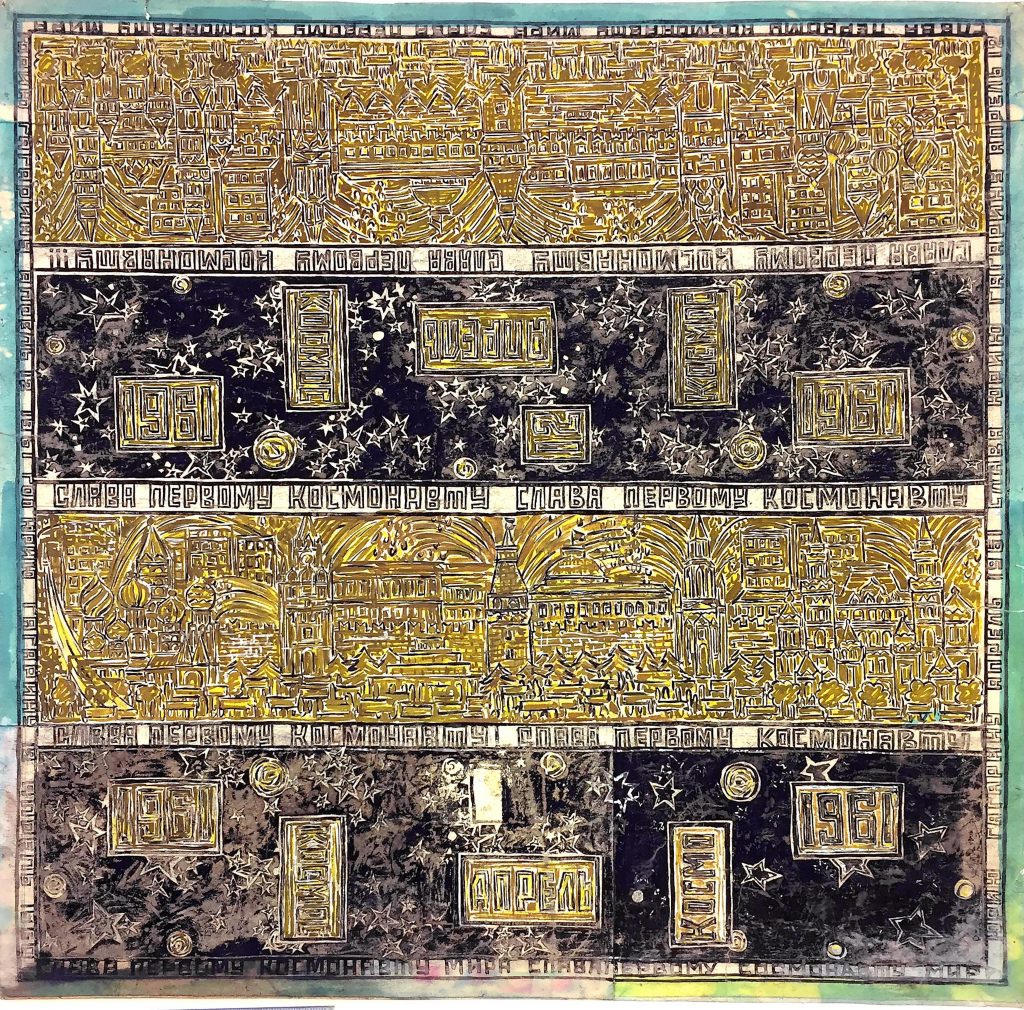 Anna Andreeva.  “Glory to the First Cosmonaut” Design for commemorative silk scarf to be donated to Queen Elizabeth II . 1961

The design, however, created significant resonance in British diplomatic circles, and Andreeva got a personal invitation to meet the Queen and the ruling elite. Despite “incorrect” origin, the fact that she was not a member of the Communist Party and, last but not least, that she was the wife of the dissident, Andreeva was allowed to join the delegation only under the strict supervision of the KGB.  More than twelve people in grey suits, as Andreeva later recalled, accompanied her to the official and unofficial meetings. Even though she spoke fluent French any direct communication with foreigners was strictly forbidden. She could only answer through the official translator which she found uneasy and intimidating.

There was one episode she particularly liked to revisit in her later memoirs – the trip to the house outside of London of the old Russian aristocrat – Count Gagarin. The house was packed with Tsarist portraits, porcelain, icons and precious books with golden ornaments that was utterly opposed to any Soviet dwelling, more like a time machine taking her back to her own childhood.  The attitude the British had to her is also worth mentioning. People in the streets were asking to make photos with her and even to touch her when they found out she was Russian as for the decades they did not see a real Soviet person. She had to explain that there are no wild bears in the cities and that being an artist in the USSR was quite a prestigious profession. Thus, artist-textile workers indirectly participated in the establishment of cultural relations between states and political systems. 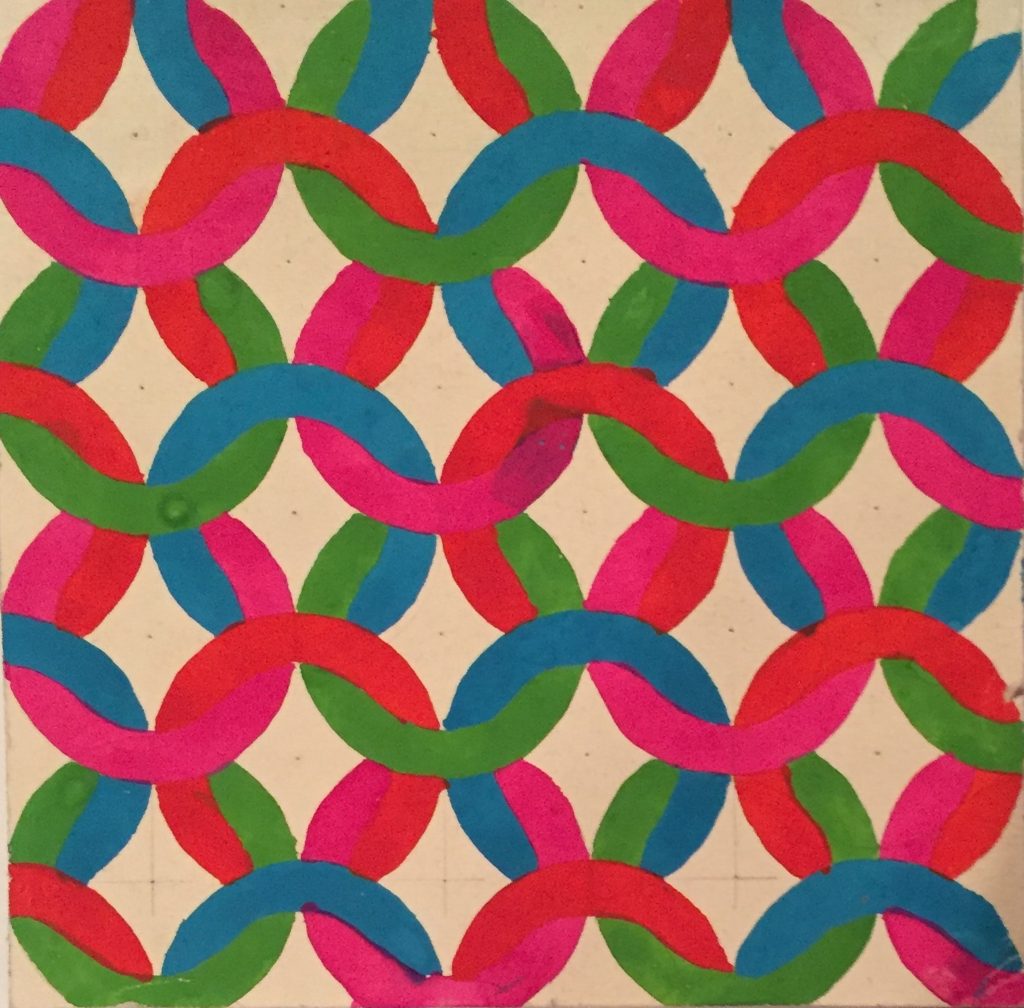 Another example of the role of textiles in the cultural diplomacy of the 60s were the commemorative designs for the International exhibitions, festivals, sports competitions. Among them was the Moscow International Film Festivals. Initiated in 1935 it became a regular event from 1959 until 1971. Silk scarfs and palatines were meant to represent progressive views on the intersection of the two medias – cinematography and textile. Most of the pieces were not for sale, kept for presentation to diplomats, international celebrities and film stars visiting Moscow. Limited edition of such commemorative scarfs were presented to such international stars as Michelangelo Antonioni, Anna Maniani, Sophia Loren and others. Even though Anna Andreeva`s sketches were attested by the higher artistic committee as “unconventional” due to colors that were “too bright” and patterns that were “too active” – all of them were, in the end, approved.

Andreeva`s designs were often based on a re-thinking of traditional Russian floral and folk motives, combining them with the progressive aesthetics of the moving images, such as a scarf with roses framed by a black and white roll of film. The media of cinematography offered a radically new vocabulary for textile artists. Surprisingly, as Andreeva later recalled, when working on these politically and ideologically-charged commissions she was granted more freedom than artists in monumental art, in graphics or oil. Unlike many other artists working with textiles she used innovative optical elements – a trompe d’oeil effect, that was later cited as a rare example of Soviet Optical Art. She even dared to use foreign fonts and alphabets as part of repeating geometric patterns. Such visual experiments would have been impossible if not protected by the very logic of the textile media. 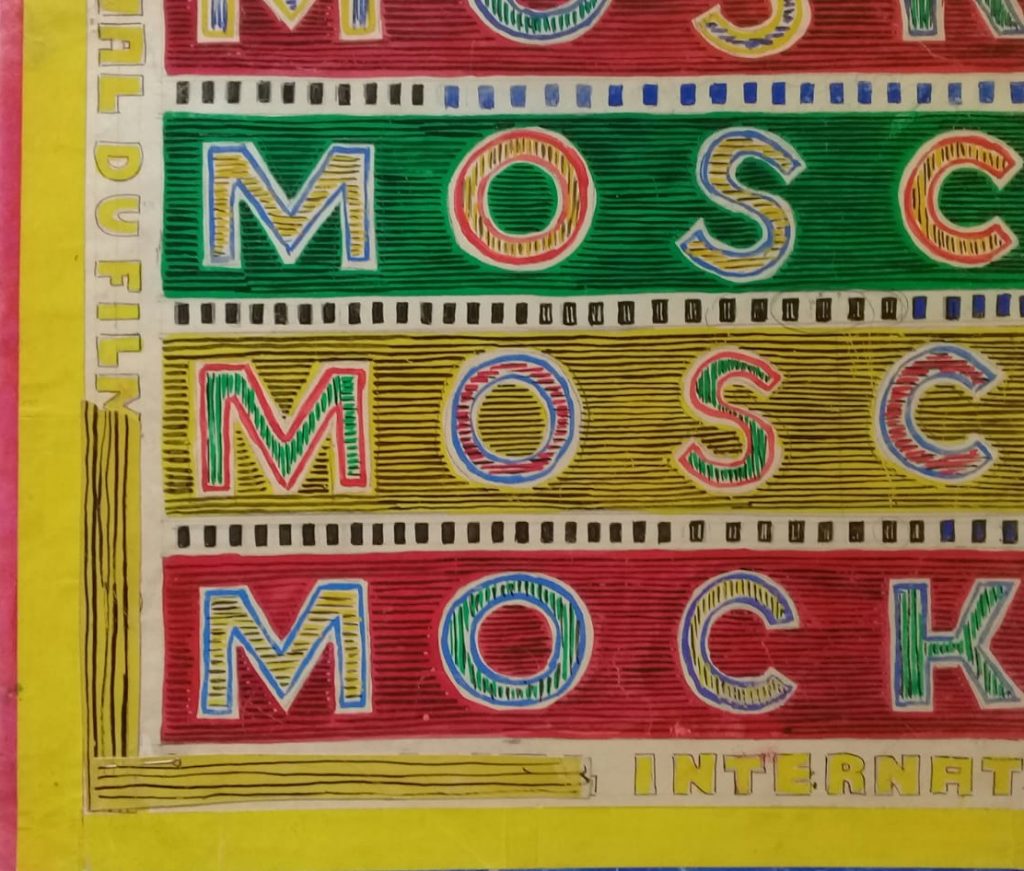 Red Rose artists not only contributed to the international cultural scene, but also participated in the development of the professional and industrial communication between Soviet republics. Artists’ collectives went on trips all over the USSR getting acquainted with local art and silk weaving traditions. Such expeditions ensured the enrichment of the graphic language, color palette as well as an active exchange of ideas across traditions and nations. Several times a year Andreeva travelled to the silk manufacturing sites in Uzbekistan, Kazakhstan, Georgia and Armenia. These travels inspired her for the outstanding designs and even the introduction of an incredibly bright, almost fluorescent, colors in her work entitled, “Soviet sanatoriums”. All the artists of the factory were members of the Union of Artists, as was Andreeva, and regularly printed in the main art magazine of the country – Decorativnoe Iskusstvo SSSR (Decorative Art of the USSR).

Having her strong idiosyncratic voice in Soviet textile design was not without its complications. Numerous explanatory notes were written by Anna Andreeva defending the reasons for so called anti-proletariat aesthetics. Such handwritten notes on the back of the sketches or on fading paper may form the parallel narrative of the history of Soviet textile and the Soviet design in itself. Perhaps the most vivid and the most absurdist case of such accusations attacked her series of works called – Electrification. 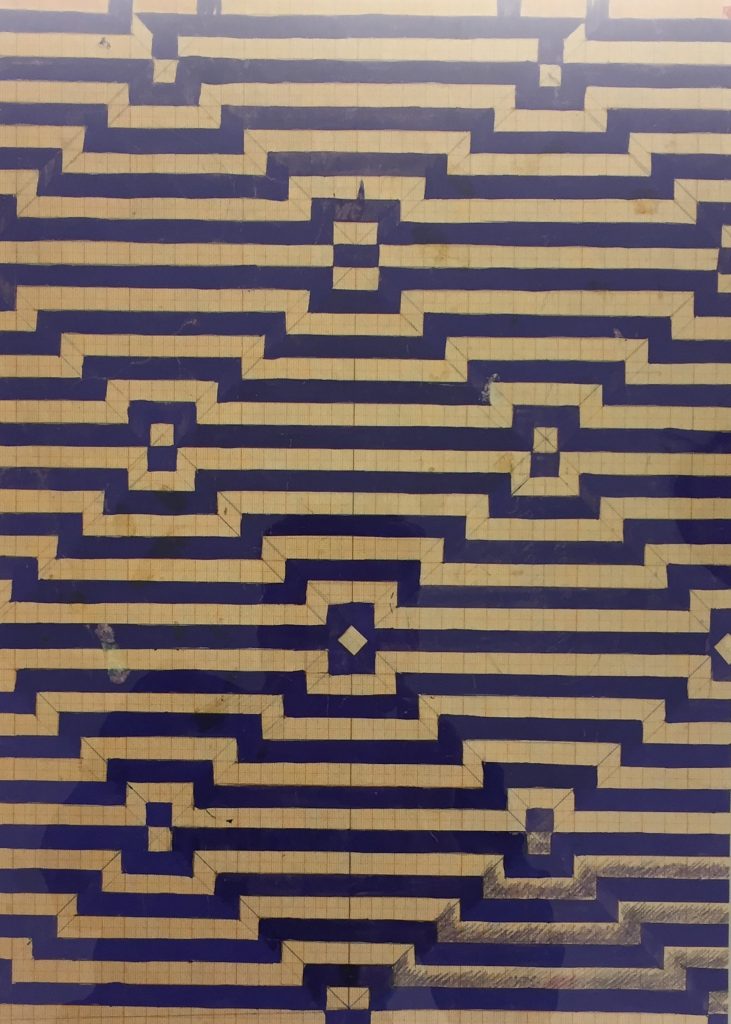 Completed in 1962, these series of works feature abstract patterns black on black, white on white, and black, silver and white. Such radical design was initially banned as being ‘the pure propaganda of abstraction’. Andreeva argued that Electrification – was one of the pillars of the Marxist-Leninist Doctrine, as stated by the notorious Lenin`s claim: “Communism equals – the industrialization and the electrification of the entire country” and is by definition the celebration of progressive Socialist vision. Not only did she manag to convince the committee to exhibit the works at the Manezh Hall by the Kremlin, and these designs formed the core of the interiors of the Radio Club.

Andreeva was a pioneering female artist, her works sought to represent the dynamism of modern life and political change. Her whole practice spanned the arc of the XX century, but she was also a networker fighting for the rights of textile artists, bringing together artists, architects and writers. Serving as the chairwoman of the Textile Section of the Moscow Union of Artists, together with the designer Alla Levasheva, Andreeva secured artists access to privileged positions in the sanatoriums at the Black Sea. Due to such privileges, the importance of Soviet artists working in industrial production significantly increased. This newly-discovered archive gives us a chance to witness how experimental she was as an artist, but also how complex textile art can be, that prints on fabrics act as agents and provide important evidence of the emotional, ideological and political climate of the time.

With large audiences cutting across genders, territories and social classes, textiles spread their messages all over the world.