A visit of a guest orchestra is always an anticipated event at Southbank Centre, but when it is the one of the scope and historic importance as Gewandhausorchester Leipzig, it becomes one of the highlights of the season with tickets disappearing quickly despite their high prices. The orchestra prides itself on being the oldest civic orchestra in the world with Johann Sebastian Bach being its Music Director for 27 years. With the roots starting with Bach and his sacred music, the orchestra still specializes in his music but also performs other grandiose works of German and Austrian repertoire (Wagner, Bruckner, Beethoven, Mahler) and has had associations with famous conductors of 20thcentury, such as Kurt Mazur, Herbert Blomdstedt and Ricardo Chailly. 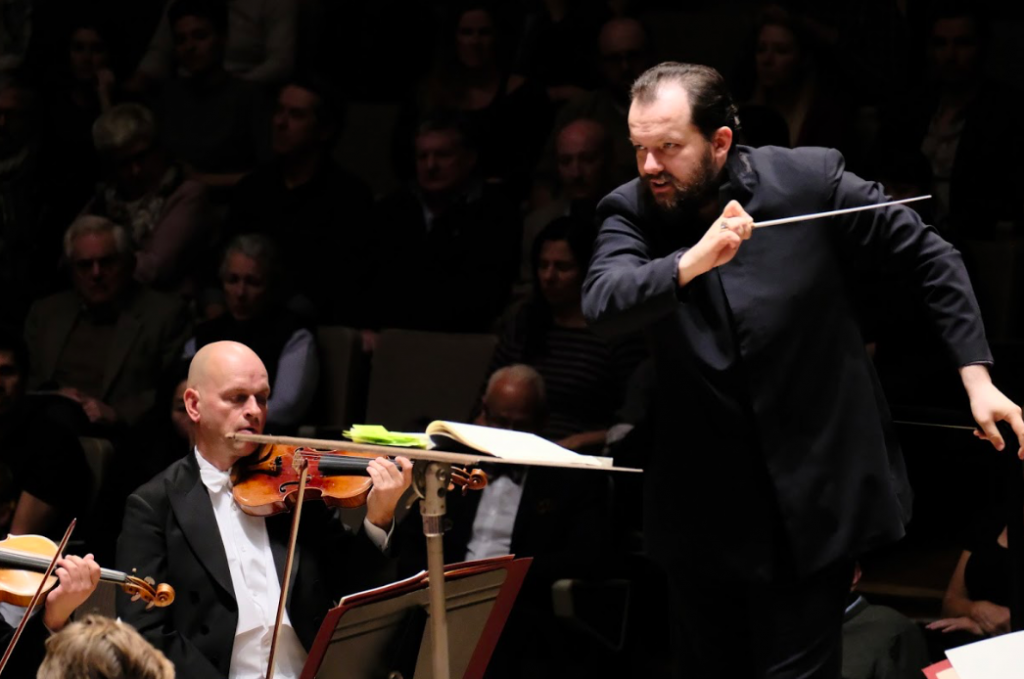 Latvian-born 40-year old Andris Nelsons assumed the post of its Principal conductor (Gewandshauskapellmeister) in February 2018, and has been dividing this position with the role of being a Music Director of Boston Symphony Orchestra ever since. For the second evening of his residency at the Southbank Center in London Nelsons made a rather unusual choice of pieces to reflect his origins in Riga and education in Russian culture and literature in the 1980s, while combining it with a more expected Mahler’s First Symphony. Thus, unexpectedly, with a British premiere of a work ‘Māra for ochestra’ (2014) by Latvian composer Andris Dzenītis and a collection of arias from Tchaikovsky’s operas the evening had a visibly and audibly Russian (in a broader sense of the word) colour and vibe to it. In a way, it prepared us to Nelson’s very specific, langorous and melancholic take on Mahler’s youthful First Symphony, with the audiences being acoustically ready to delve into unknown valleys of Mahler’s music under the guidance of the Latvian maestro. 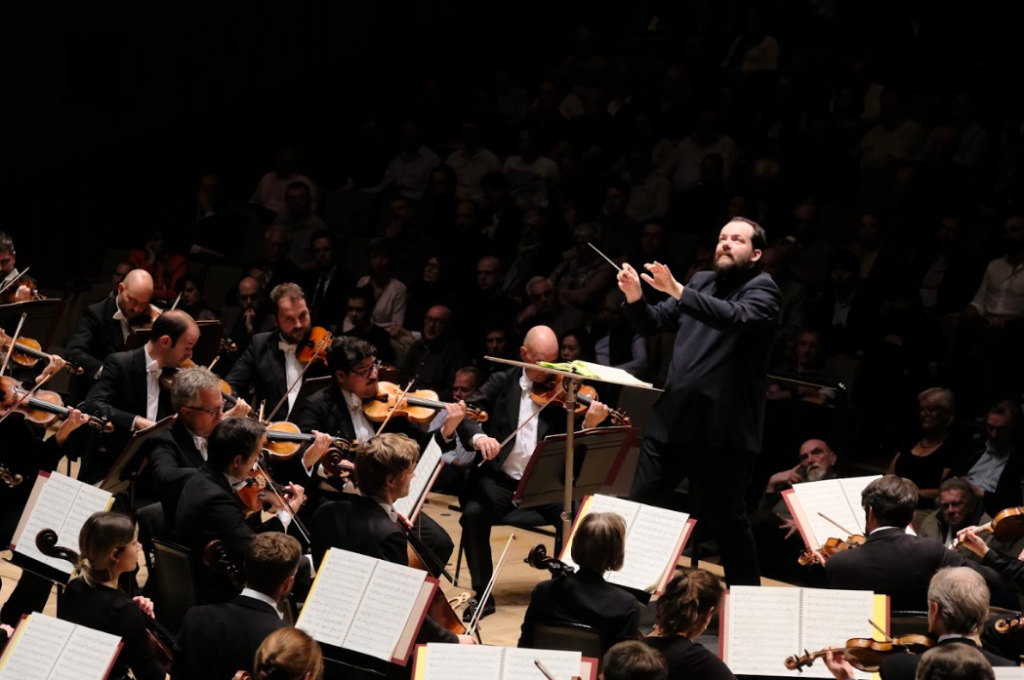 ‘Māra for ochestra’, a 15-minutes orchestral piece by Andris Dzenītis started that evening. It is a piece where the 40-year old composer tried to investigate the evocativeness and spirituality of Latvian mythology. It is hard to explain what Māra stands for – it is the whole universe in its materiality, physicality and soulfulness. Dzenītis even tried to make runes and visual motives to be represented in music, with instruments criss-crossing one another and forming (if it is possible) geometric patterns that are reflective of Latvian folk mythology. The piece starts and ends similarly – in a long-developing, very evocative, very brave in its choice of instruments (sometimes the orchestra remains quiet to allow one of them to sing and then, almost like fire, the sound is transferred to another one). One could feel the inside clock of time ticking in- between these quite, intense exchanges. The music draws us in almost like a magical marsh, it draws on our deepest musical imagery, almost sliding into unconscious, and then in the middle it gains momentum, it invokes the whole orchestral power, brings in the mysterious forces of nature, astounds us with the webs sewn with audacious choices of insrumental combinations. And then again it gradually disappears into nothingness imbued with melodies, as though now it is our turn to imagine them in our heads in order for this fairy tale to continue and to live. 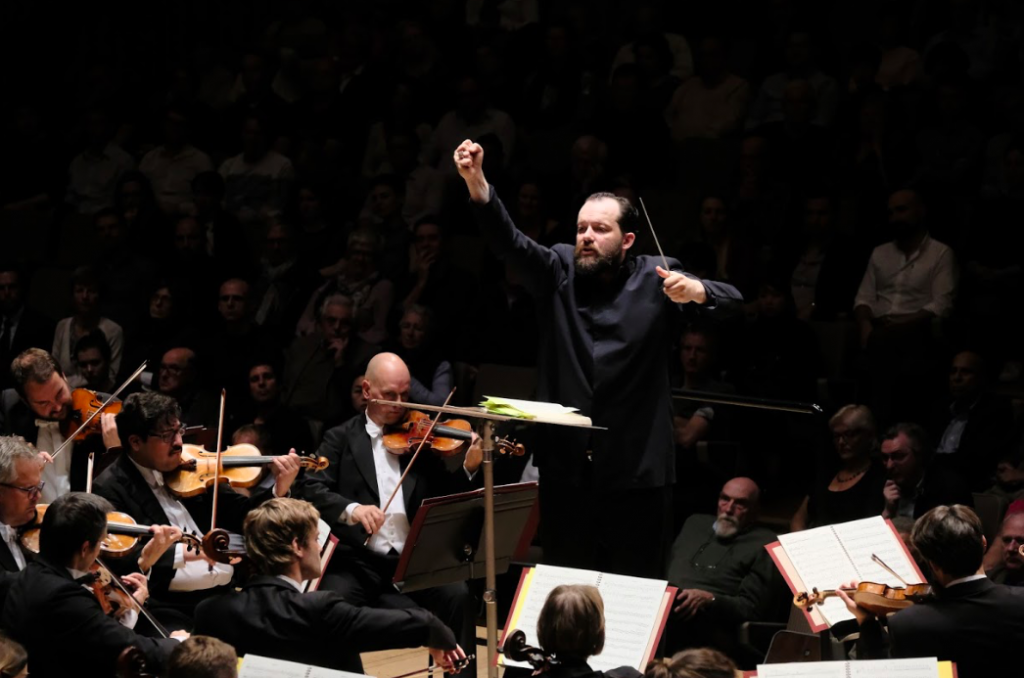 After Andris Dzenītis (dressed in a beautiful white shirt with blue folk motives) received his deserved applause, it was a beautiful and imposing Kristine Opolais that took the stage to sing Liza’s arioso from The Queen of Spades and Tatyana’s Letter Scene from Eugene Onegin, these pieces interspersed with Polonaise from the latter opera. It is interesting how interpretation and a singer’s personality could change everything – thus, with Opolais on stage Pushkin’s heroines suddenly acquired a strong tinge of Verdi’s women (Tosca or Lady Macbeth). She articulated the words of the librettos (put on Pushkin’s prose and poetry) masterfully, taking special care for the Russian words of both operas to be distinctly heard. But interestingly enough she almost conspired against our expectations from Liza and especially Tatyana. Tatyana was the woman who had to decide here and now what to do with her love and, evidently, would not take Onegin’s ‘no’ for an answer, fighting for her love if she chose it was worth her while. Her dreams, her fears, her indecisions became less of a struggle, but rather a proud, distinctive and confident presentation of female logic where different angles of a particular torment could only lead to a successful, triumphant solution. In a way, it was as far from Tatyana’a character (as Pushkin has imagined her) as possible, but somehow Opolais made us believe that such vision of Pushkin and Tchaikovsky was viable and enticing. Her character’s triumph was also her own, and evidently such decision reflected her own victorious personality as she took her applause (and even a bouquet of flowers presented by a man) from the audiences.

Mahler’s First Symphony finished that evening, and here, as a paradox, Nelsons followed in the footsteps of his now ex-wife to give us an unusual, although very haunting and deep interpretation of the work. The Symphony is the first work of a composer in this genre, and in many instances he mocks the expectations of bourgeois audiences, introducing a Ländler (Austrian folk dance) and then klezmers (Jewish music) along with a French folk tune Frère Jacques into his symphony, doing it in a tongue-in-cheek manner. However, the finale of the symphony is majestic, powerful and sonorous, and many conductors use a much quicker tempo for it to rich this astounding finale with a needed effect. However, Nelsons took a completely different route in presenting us this symphony. He did not take its playfulness for granted, but, on the contrary, explored its contasting rhythms as though it was a long labyrinth where we could walk, with new turns awaiting us on every corner. This deep immersion into the symphony was almost not warranted by its status amongst other corpus of Mahler’s work, but Nelsons took it and we almost forgot that we were listening to this composer’s First Symphony. The slowing of the overall tempo allowed to discover combinations of instrumental harmonies as though we were hearing them for the first time, and well-known themes and ideas sounded as a completely new argument under Nelson’s baton. It was not a reverie, but indeed a magical journey where Gewandhausorchester’s sound was as rich as we could imagine in our most daring expectations. Bravo, Maestro, and bravo, Leipzig musicians for giving us a taste of your famous sound and original approach to well-known music!