The Most Sincere Form of Flattery? ‘Amerikanizm’ and Russian Design 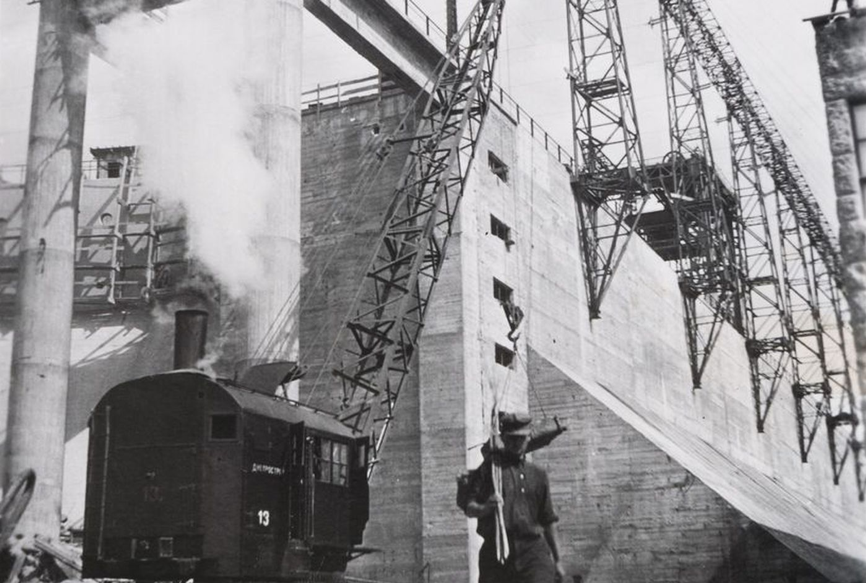 The narrative of the Cold War usually works inexorably to position the USA and USSR in complete opposition to each other, each fully intent on their rival’s overthrow or collapse.  As visitors to the Canadian Centre for Architecture’s current exhibition realise, however, there is also a significant tale of appreciation and emulation in the Russian view of the United States, and also at times in American recognition of Soviet achievement, which runs through the first half of the twentieth century and finds expression in some surprising ways.  Through a wealth of design plans, models, photographs, and film footage, ‘Building a New World’ tells a fascinating story of mutual influence.

The exhibition opens with travelers from late-Tsarist Russia, by this time industrializing rapidly but at nowhere near the rate of the US, casting admiring glances at the scale and potential of the forces unleashed in the major industrial cities of North America.  At the turn of the twentieth century we see architects like Alexander Dmitriev and Vladimir Semyonov calling for Russian cities to emulate the planning and design of their American counterparts.  Whilst concerns persisted about the socio-economic injustices at the heart of America’s capitalist system (and which arguably made its dizzying growth viable) reports sent back to St Petersburg and Moscow excitedly described a new way of life being realized amidst the grid-like streets of New York or Chicago.  Tsarist Russia had begun to emulate these examples, but once the events of 1917 had changed the country’s course it would be the Soviet state that would pursue them to greater effect.

Many of the early-Soviet intelligentsia were familiar with the culture and day-to-day life of the US, and some had managed to experience it at first hand.  After 1917, however, these interactions took on a different meaning, as Russian visitors were themselves envoys from a country where the most immense changes had suddenly become possible and where the obstacles to material and social regeneration were felt to have been swept away.  ‘America’ did not lose any of the fantasy that early-20thcentury observers had attached to it, but the newly-minted USSR was turning its focus from emulation to whole-hearted competition, in which the ‘Americanised Bolshevism’ that Leon Trotsky called for in 1924 would in turn triumph over the ‘imperialist Americanism’ of the USA itself.  In learning lessons from the USA’s transformation into an economic and industrial giant, Soviet power pledged itself to mirror American results without in the process destroying the workforce that would make it possible. 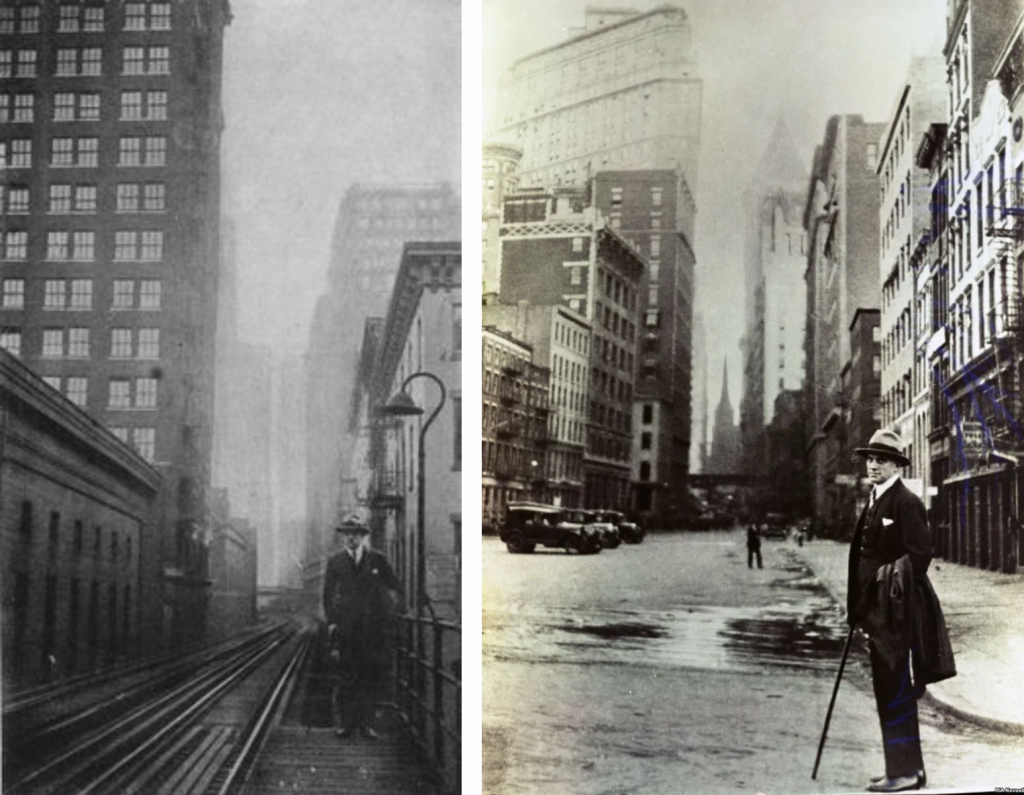 Thus, when the poet Vladimir Mayakovsky toured the eastern states of the US in 1925 giving talks and readings to left-wing workers’ groups and trade unions he was both a wide-eyed tourist amidst the skyscrapers and bridges of Manhattan and an evangelist for the Soviet way of life.  Even as he “gawp[ed] like a caveman” at the sight of the Brooklyn Bridge, Mayakovsky was dreaming of a Soviet state that could match its construction and at the same time eliminate the economic injustices of the American way of life, in which he imagined “hordes / of hungry / and jobless / men” jumping from the Bridge’s beams into the river below in despair at their situation.  This belief that the Soviet state could equal and surpass its capitalist rival was a staple of 1920s thought, albeit one that relied heavily on an honest appraisal of just how far behind the USSR was at this point, and just how far it had to go.

As if to hold out the possibility of making up that lost ground, however, the USA’s economic collapse in the years after the 1929 Wall Street Crash not only exposed the hazards of unfettered capitalism but led many people to look at developments further east and question whether, in its collectivized agriculture and Five Year Plans, the USSR had indeed found a way to create huge infrastructural renewal with the state, and not private capital, as the engine of development.  As the factories of Detroit and the steel mills of Pittsburgh stood idle, the tractors rolling off of Soviet production lines and the rapidly electrified towns and cities hinted at an alternative path to economic growth.  When plans were drawn up for a dam and hydroelectric plant on the Dnieper river in Ukraine, the lead engineer Ivan Alexandrov, having travelled in the US, lobbied for the American engineer Hugh L. Cooper being hired to oversee the project.  In 1932 film footage recording the completion of the 720m long dam, Cooper is seen at the ceremonial opening, his brief speech translated for the benefit of his audience as he apologises for his insufficient grasp of Russian.  Ironically, as domestic opposition to Roosevelt’s ‘New Deal’ read its state-led investment in infrastructure as uncomfortably close to ‘Socialist’ practice, some American engineers and designers were helping the USSR to become a first-tier industrial power.

This collaboration did not survive the Second World War, however, and the post-1945 Soviet taste in more monumental architecture (the ‘Seven Sisters’ or Vysotki towers in Moscow between 1947 and 1953 being the most high-profile examples) over the glass and steel modernism of Mies van der Rohe and his American followers was accompanied by increased condemnation of US economic, social, and racial inequality.  By the 1950s proposed developments that were visually indebted to American models were roundly attacked in the media, while ideologically reliable Soviet designers anticipated and channeled the late-Stalinist regime’s tastes for grandeur – a style that was exported to the other countries in the sphere of Soviet influence once the ‘Iron Curtain’ had descended on Europe, and which reached its apogee in the Palace of Culture that was ‘given’ to the Polish capital Warsaw in 1952.

With the death of Stalin, and Nikita Khrushchev’s rise to power inside the USSR, a renewed emphasis on technology and its potential entered Soviet discourse, particularly in the context of the ‘space race’ between the two powers that followed the launch of the first satellite, ‘Sputnik’, in 1957: a contest in which for more than a decade the USSR managed to reach every milestone before its American rival.  As Francis Spufford’s fascinating 2010 book Red Plenty reminds its reader, there was a brief moment when the Soviet future looked to be a place where science and socialism would reach goals beyond those of the capitalist West.

There was one area, however, in which the ‘New World’ of the US offered something that could not be replicated in its Soviet rival.  In the final room of the exhibition we are taken to the 1959 American National Exhibition in Moscow, with its Buckminster Fuller designed geodesic dome and the giant television screens with their ever-changing montage showing life, work, and leisure on an ‘average’ American day assembled by Charles and Ray Eames.  Recreated here on a smaller scale, but with the same content that was put before the Muscovite viewers, this hymn to the dizzying plurality of options for those dwelling in the Eisenhower-era superpower prompted Khrushchev to engage Vice-President Richard Nixon in the famous ‘Kitchen Debate’ and to claim that the USSR would outstrip this material abundance not by following the capitalist lead but by bringing the full force of its command economy to bear on the production of consumer goods as it had already done in the larger infrastructural projects of the 1920s and 1930s. 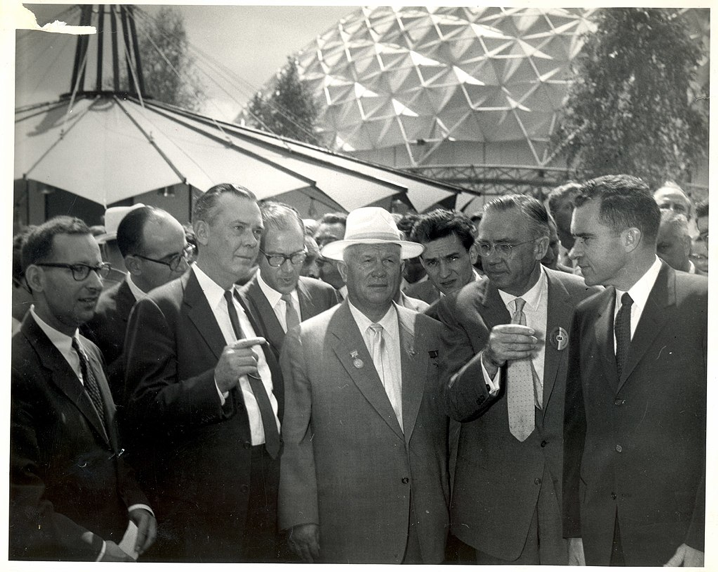 This soft-power showcase revealed, however, that whilst the Soviet system could realise grand plans it could not engineer the conditions for individual affluence that fueled its rival’s post-war boom.  After decades of admiring and trying to emulate America’s industrial potential, the Soviets realized that it was not in dams, factories, and skyscrapers that they had been outdone but in the consumables that flooded American homes while the Soviet populace looked wistfully on.  Creating conditions for consumption, not production, proved to be the final challenge of ‘Amerikanizm’, and as the history of the 1980s and 1990s, and the last room of this excellent exhibition reminds us, in the years before the Soviet state collapsed completely blue jeans and video recorders proved to be just as powerful as weapons in the struggle between these two powers as immense architectural projects.

Building a New World: Amerikanizm in Russian Architecture is at the Canadian Centre for Architecture, Montreal, Quebec, until 5th April 2020.  For more details follow the link.