Thinking of a new series to watch? Read the review of “A Young Doctor’s Notebook”, SkyArts1 series, by Anton Sanatov.

Screen adaptations are like chemistry – they all involve (materials) a vast amount of factors that need to be combined using that one elusive formula in order to make the entire intricate ordeal work; and not combust in flames. Thus, when bringing a piece of literature to the screen one must thoroughly familiarise themselves with the tones, subtexts, character denominations, and subtle plot equations of a given piece before chucking them all into a cauldron and chanting an incantation.

Such observations are perhaps especially true when a said adaptation is being handled by a foreign production – as many of the important cultural nuances that are threaded through a work may be overlooked by someone who is unfamiliar with indigenous customs, leaving their absence in turn to shatter the foundations of the entire endeavour. However, much in the vein of adapting novels to scripts, sometimes sacrifices must be made in order to make things more accessible.

In the end, when it comes down to it, everyone has their own vision and interpretation of a given text, and today we are looking at the first two episodes of a 2012 Sky Arts production ‘A Young Doctor’s Notebook’ – a limited television series based on the collection of autobiographical short-stories of the same name by Mikhail Bulgakov – which boasts high production values, whilst often over-looking others. 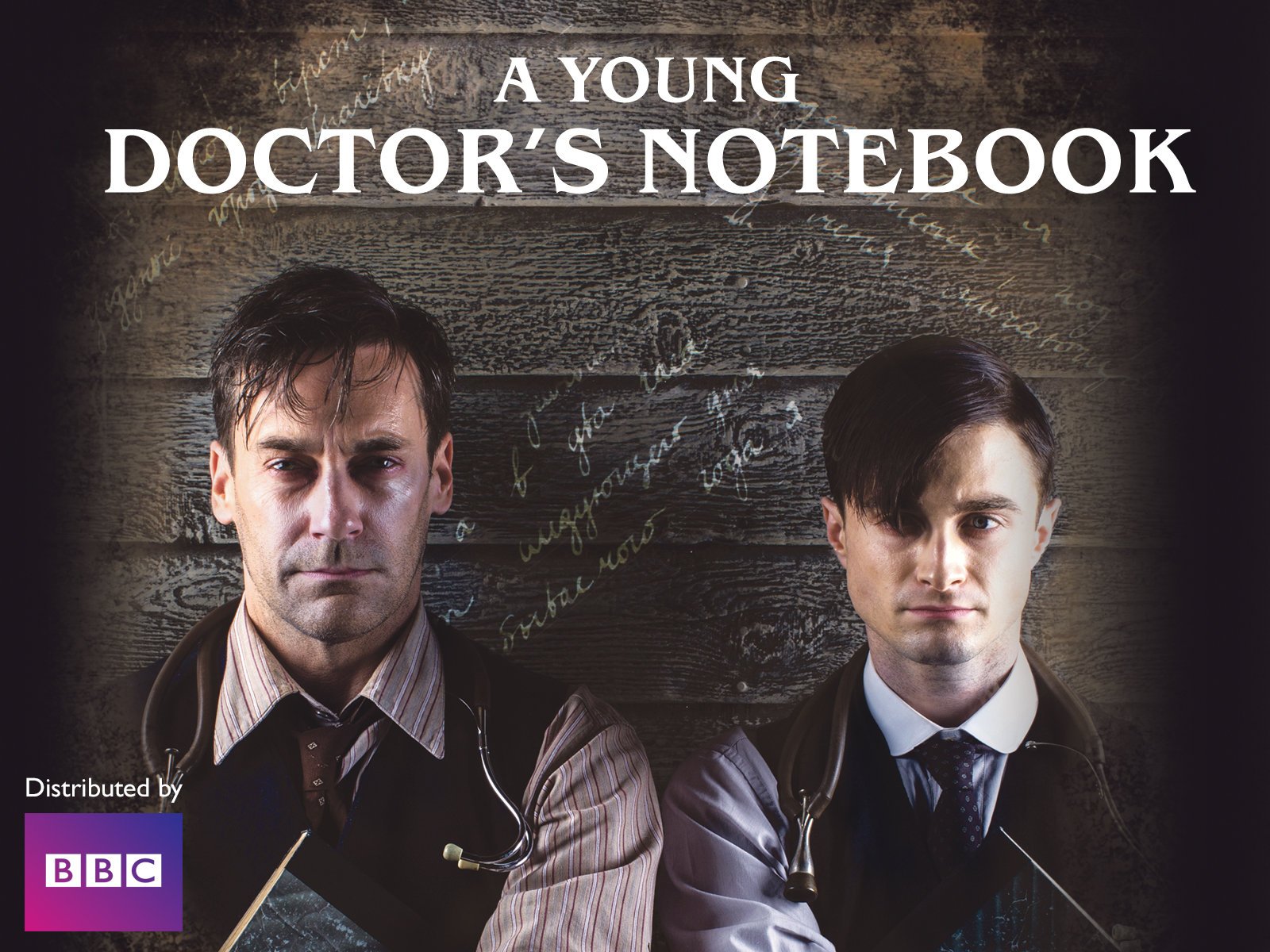 ‘Daniel Radcliffe and Jon Hamm in ‘A Young Doctor’s Notebook’

‘A Young Doctor’s Notebook’ was originally written by Bulgakov in the 1920s, and inspired by his experiences as a young medical graduate from Moscow, during his time in a remote Russian village hospital. Each episode of the series sees Dr. Vladimir “Nika” Bomgrad (Jon Hamm) – now in his middle-age – reminisce of his times as a fresh-faced physician in Muryevo during the Russian Revolution as he sifts through the pages of his diary and transports the viewers to the flashbacks of his younger self (Daniel Radcliffe), to whom he makes the occasional appearance as an extension of his consciousness.

The aforementioned format is indeed quite ingenious, as it allows for the two sides of the character to interact in an amusing and comprehensive way in order to explore, build, and bring the full character to life, as both nitpick and examine each other within their respectable eras.

The series stands to be quite faithful to its source material. And even though some of the occurrences do not appear in the order that they do within the written version, their placement is seamless within the flow of the episodes. The atmosphere too, whilst somewhat hampered by an excessively British aesthetic and an overly campy approach, doesn’t weigh down upon the characters, and redeems itself by being a quaint play space for the light-hearted interactions between the cast – much in the vein of a theatre production. 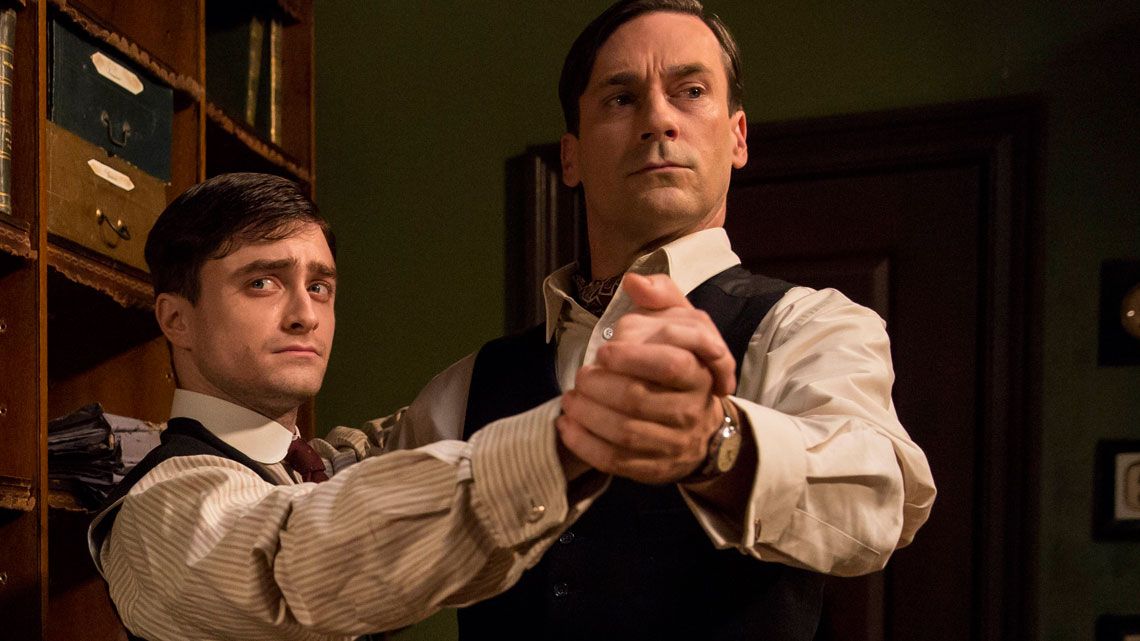 Daniel Radcliffe and Jon Hamm in the Young Doctor’s Notebook

One of the more disappointing things about Sky’s ‘A Young Doctor’s Notebook’, however, is the perhaps the portrayal of Dr. Bomgrad himself. This is by no means a critique Radcliffe as an actor, for his performance is excellent, but it is the way that the character was handled and transposed from page to the screen that the reader of the original may find somewhat irksome.

It appears as if, in order to make the young doctor more “digestible” as a character for the regular, unassuming viewer, much of the personage’s characteristic weight had been shed in favour of spotlighting his more “childish” and unfavourable qualities. Whilst this is also perhaps done in order to achieve a greater contrast with the older doctor and outline the evolution of his demeanour, it may often make for uncomfortable viewing for someone who pictured young “Nika” as something more than an archetype of ignorance.

The aforementioned lacklustre personification of the young doctor also in itself becomes a maelstrom that pulls the doctor’s relationship with the other characters into its swirl. Whilst the young doctor’s lack of experience is indeed one of the central themes of Bulgakov’s vignettes, his colleagues nonetheless retain an air of respect towards him – unlike in the TV version. The hyperbolic patronization with which the on-screen mid-wives Pelageya Ivanovna (Rosie Cavaliero) and Anna Nikolaevna (Vicki Pepperdine) treat the doctor, is somewhat jarring at times, and often makes the comedy for a rather sordid affair – which, given its dark, humorous inclinations, may be the intent. 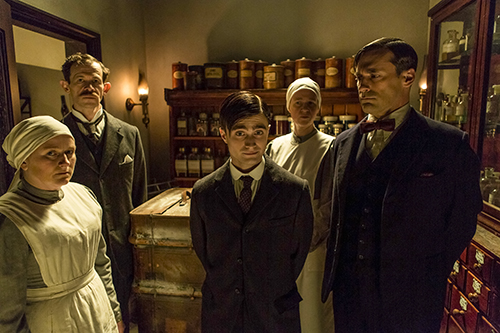 Nonetheless, what the series lacks in its formula for adaptation, it makes up in its execution of the chemistry between the characters that is does create. There is no drag in the interaction of the characters, and the actors play upon each other with a natural ease of familiarity. The episodes, whilst perhaps not as engulfing as the original material, are intriguing and entertaining, and make for pleasurable viewing.

Overall, whist it may not be the most faithful portrayal of Bulgakov’s medical anecdotes, ‘A Young Doctor’s Notebook’ comes out to be an apt TV show in its own right. Even though this excessively westernised adaption makes for an overly polished depiction of Russian culture – which may disenchant some viewers – it certainly serves as an endearing introduction of these tales to the world.

(‘A Young Doctor’s Notebook’ ran for two seasons – with the second being based on Bulgakov’s short story ‘Morphine’.)