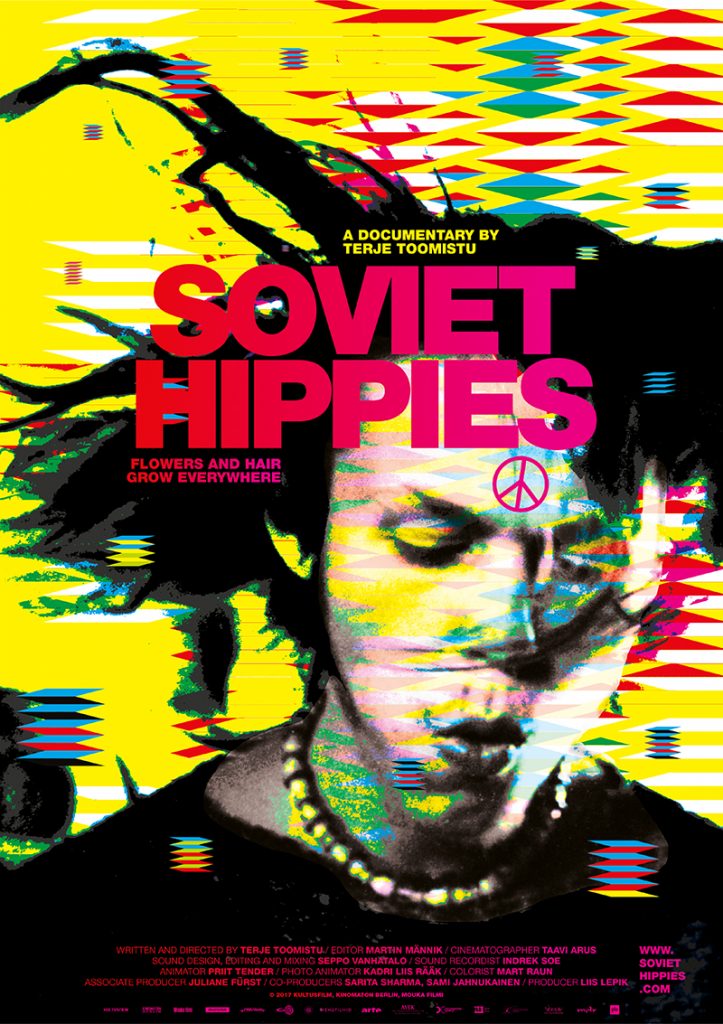 Dash Arts, an organisation which challenges the way we see the world through artistic experience, is currently exploring what it means to be European. As part of its ‘Eutopia’ programme, Artistic Director Josephine Burton hosted the London premiere of Soviet Hippies at Rich Mix, joined by Estonian director Terje Toomistu and one of the film’s stars, Vladimir Wiedemann. Soviet Hippies dives into the mysterious, largely unexplored ‘hairy underground’ of Estonia, Russia and the wider USSR. It unearths a rich sub-culture which developed alongside the Western hippie movement but represented a distinct and uniquely enduring product of the USSR. The documentary consists of interviews with former members of the Soviet hippie movement, a wild road trip down memory lane towards present-day Moscow, unseen archives, psychedelic animations and a fabulous soundtrack of Soviet underground rock’n’roll. Soviet Hippies provides wise and witty insight into the history, significance and legacy of a vast movement which is largely unknown in the West and often overlooked by post-Soviet cultural memory discourse. 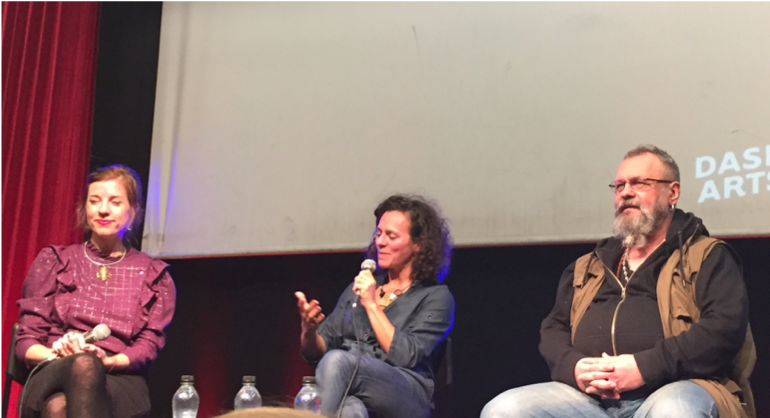 Terje Toomistu spent her teenage years in post-Soviet Estonia with an incurable interest in the hippie scene and Jim Morrison. The idea for Soviet Hippies came about after she spent half a year in Russia writing a thesis on memory culture, embarked on a road trip around South America and read Wiedemann’s memoirs. Wiedemann’s book, which has gained cult status in Estonia, opened her eyes to a history she’d never known. She became enthralled by the communist-era hippies, their spiritual roots and their untold stories. Little academic research on the topic had been done in 2011, so Toomistu began conducting interviews for a few years before inviting a group of former Soviet hippies on a road trip to Moscow in 2015, and beginning work on the film script. She had initially been told there were no existing video archives of the Soviet hippies, but footage of festivals and gatherings was later discovered in Moscow and digitised for use in the documentary. 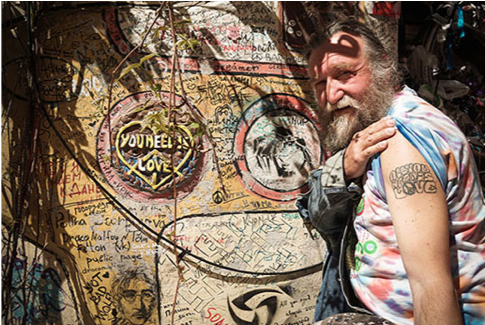 Aksel first listened to The Beatles as a teenager when he went to an international summer camp. He had no idea what they were singing about, but loved the sound – ‘What a strange vibration!’

The Soviet ‘long-hairs’ emerged in Moscow and Leningrad in the mid-1960s, when Western music, trends and The Beatles were trickling in via Finnish television, Radio Luxembourg and other sources. The ‘long-hairs’ constituted a sub-culture of diverse people who shared a common moral goal of individual freedom against the red flag. Some were mystics and Shamans, others were dissidents or escapists. Some hippies fought against the political system, others ignored politics altogether. Some retreated from society into Caucasian caves, others engaged with society and strived to change it. Sometimes they hitched rides across the USSR, sometimes they opted for substance-induced mind-travel. By the 1970s, the authorities were intent on hiding the many forms and manifestations of the hippie movement. With their unruly appearance, flower power, and habit of removing telephone box parts for guitars, the Soviet hippies were totally un-Soviet. The documentary’s interviewees told tales of having their hair forcibly cut, being tailed by the KGB, and even being dragged to psychiatric wards for blasting out ‘Sergeant Pepper’ loudly at home. 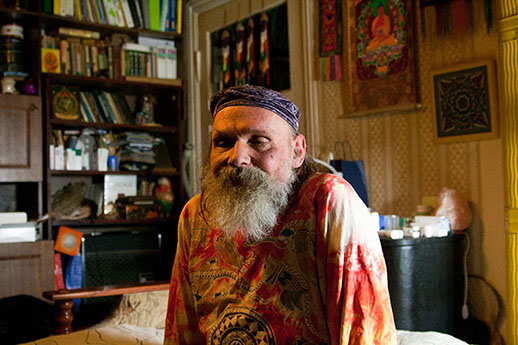 For Aare, the ability to explore internal dreamscapes allows him to travel, despite being physically limited by his illness

The Soviet hippies grew into a colourful network of musicians, vagabonds and artists, united by their belief in peace, freedom from Soviet daily reality and a lifestyle of kaif (ecstasy, joy). This sub-cultural network was known as Sistema (The System), described by Toomistu as ‘the Couchsurfing of the 1970s’. The hippies shared and passed on information about festivals, gathering spots and contact details of other individuals associated with Sistema. Iconic hippie-era albums were sourced from black markets, copied onto reel-to-reel tapes, and shared between networks of long-haired rock fans. This effective social network allowed hippies to hitch rides to other cities and find likeminded people who offered a sofa to sleep on. The documentary includes wonderful animations of notebooks produced by the Sistema network, as well as psychedelic cartoons of experiences had by hippies during gatherings. Memorably, one narrated cartoon depicts a hippie’s experience of being given tea spiked with astamol from the chemist. He envisioned a ‘web’ representing all the world that had been and will be, encountered a staircase with stairs so steep they went on for kilometres, and was confronted by a gang of two-dimensional sheep. As the hippies often say: The Soviets had their system, we had ours. 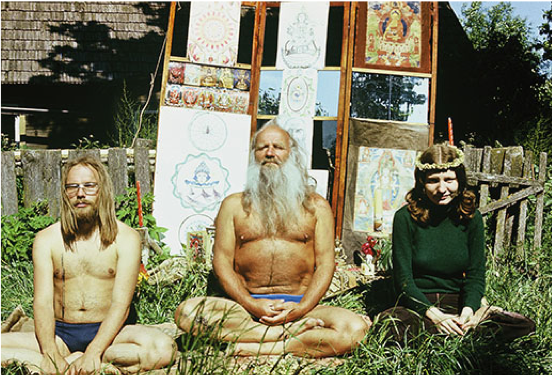 The authorities considered the hippie movement a ghastly product of Western influences, and saw them as a political threat. This led to cases of harassment by the KGB, as well as censorship, clampdowns on cultural activities and expulsions from public spaces. It may have come as a surprise, therefore, when the hippies were given official permission to demonstrate against the Vietnam War outside Moscow’s US Embassy in 1971. It was a trap. The KGB encircled the hippies, rounded them up and carried out arrests. Their goal was to wipe out hippie culture altogether, so as well as shutting down the protest, they sent some demonstrators to psychiatric centres or army camps near the Chinese border. Since the hippies were persecuted under criminal law, many ended up sharing cells with murderers. Soviet Hippies re-creates the harrowing events of 1971 and reveals a series of surveillance photos from Lithuanian KGB archives.

More than forty years later, Toomistu and a group of Estonian hippies were cruising in a camper van towards Moscow, where the hippies still meet up every year on 1st June at Tsaritsyno Park to remember the tragic mass-arrest of 1971. Along the way, they stopped at several landmarks of their most active years, fondly remembering the most bizarre of experiences. One stop was Rama Tamm’s dacha, where a spiral of wire still hung from the ceiling to drive away KGB energy. At Fanya’s place in Smolensk, the group complained of the putrid smell and searched incessantly for dope – they evidently found some, as they ended up sat together in a hazy cloud of smoke. 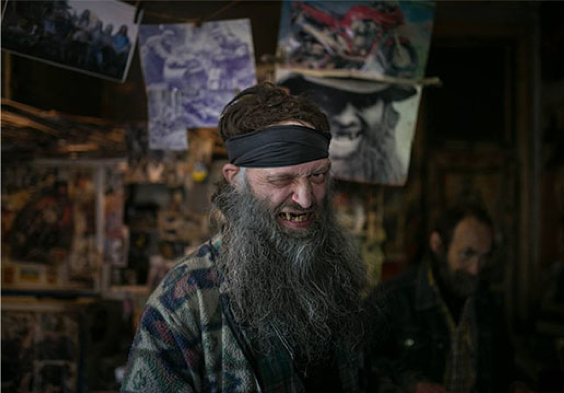 Penzel insists that he’s more than a hippy. He’s a boxer, biker, a drunk, and he masturbates. If he smells, it’s because of his age.

A particularly interesting moment of the road trip is when three girls approach the group on a beach. They are very curious and a little bemused; the hippies answer their questions about why they chose the hippie life, what it represented and why it meant so much to them. The fact that this footage is included in the documentary reminds us that the Soviet hippie philosophy is not necessarily out-of-date. The Soviet Union and Vietnam War may have ended, but the on-going rise of authoritarianism, social struggles and war certainly lead us to question our attitude towards violence and humanity. In the film, various individuals at the 1st June reunion share their views on what the meeting means to them. One woman, who has attended every reunion for the last forty years, says its meaning changes with time. At this gathering, people’s attention was fixed on the war in Ukraine and Russia’s annexation of Crimea. Interestingly, opinions were mixed. Some voiced their support for Putin and his vision of a vast, spiritual Russia. Others adopted a pacifist view, and others expressed their desire to forget politics altogether. In a scene spookily reminiscent of 1971, the film ends with the police breaking up the gathering. The Western and Soviet hippie movements may appear to be at odds: Wiedemann commented that for the Soviet hippies, the American flag was what the red flag was for many Western hippies. However, at their core, both hippie movements were about being free people. Clearly, we’re not there yet. 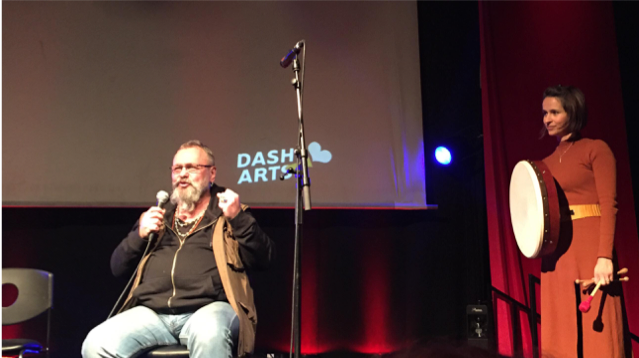 Vladimir Wiedemann treated the audience in London to a Shamanic drum performance.

Toomistu’s Soviet Hippies paints a captivating picture of an unprecedented period in history. We can finally cast our eyes and focus our minds on a narrative violently suppressed by the KGB and official discourse. The film is available on DVD with subtitles in Russian, English and Estonian, and can be ordered from the Estonian record shop, Lasering. 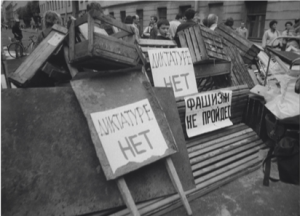