Sergey Kuryshev: This Means Figuring Out Our Life And Presenting it on the Basis of The Classic Text 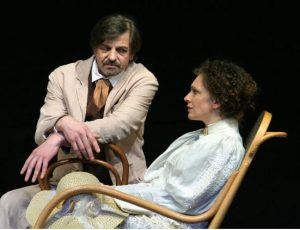 Tonight is the opening night of Uncle Vanya at the Theatre Royal Haymarket, In anticipation of the Chekhov’s play being offered to the London audience, we approached the leading actor of the Maly Drama Theatre Sergey Kuryshev (in Life and Fate he played Viktor Shtrum).

Sergey, you have been working in theatre for a long time, you are a People’s Artist of the Russian Federation. What is for you the essence of an actor’s profession?

Sergey: I think,  first of all, it is equally vital and fascinating to become aware of what the author is offering to us: to fully understand the text, the author’s thoughts, to acknowledge the circumstances in which the author created his work, and then to place oneself in the author’s shoes and imagine how you would behave in similar circumstances. I study the historical time the text deals with, and then attempt to figure out in which ways I differ from my character – and most of us, probably, do differ. And then I go on figuring out the text and by this I mean getting the grasp of the life that unfolds in that text, that happens to you character. Since our director, Lev Dodin, mostly chooses classic texts – and classic texts are always up-to-date and relevant – this means figuring out today’s life, our life, and presenting it on the basis of the classic text. 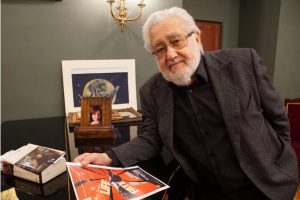 Lev Dodin, the Artistic Director of the Maly Drama Theatre

How long have you been working with Lev Dodin for and how did your artistic collaboration start?

I have been working with our director, Lev Dodin,  since 1985. The first time I saw him was when I came to the entrance exams at the Theatre Institute.  I remember he was enveloped in clouds of cigarette smoke. I did not know the way he looked yet – so I managed to  identify him by the fact that he was the first to ask me a question. After our graduation Lev invited us — my fellow students and myself  – into the Maly Drama Theatre’s troupe. And I have been working there ever since. I am very happy that my life turned out this way:  I feel that being a part of the Maly Drama Theatre fulfils my deepest aspirations and helps me to be a more serious actor. I certainly do hope that I am of some use to the company in return. I hope, Lev has not regretted having me on board for these 33 years.

Life and Fate novel is often compared to Tolstoy’s War and Peace. The performance obviously takes a lot of dedication and energy on your part. What does this production, this role mean for you?

There is no doubt that Vasily Grossman modelled his novel after Tolstoy’s War and Peace. The tasks Grossman set to himself in this novel were of a similar scope: to analyse the workings of society contemporary to him. Our performance does take a lot – from everyone in our company, not only from me. Although every and any production takes dedication and energy, our Life and Fate lasts for more than three hours, so it is quite demanding physically, too. The actors should be physically fit, especially when the performances happen one after another in a row. The role of Viktor Shtrum means a lot to me:  I am very proud and happy to be part of this production. I joined the rehearsals after the performance had been running onstage for several years already. Our director was courteous enough to ask me if I would like to become part of Life and Fate, and I grabbed his offer with both hands. This is one of the greatest novels ever written, this production is a magnificent, inspired director’s work!  And  I am – yet again – honoured and happy to be part of it. Such roles are what an actor lives for! 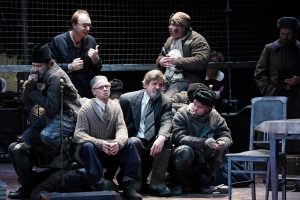 Why among all you other productions the Maly Drama Theatre decided on bringing two plays by Grossman and Chekhov? What would you like the UK audiences to take away from these two productions?

Well, to start with, we were invited to come to London with these two shows:  Life and Fate after Vasily Grossman and Uncle Vanya after Anton Chekhov. As I know,  our Artistic Director Lev Dodin responded to this invitation with great enthusiasm – we dearly love both productions.  Of course, we are looking forward to seeing how the London audiences receive our both  productions. Uncle Vanya has already been shown in London, a long time ago. Life and Fate is our UK premiere. These both productions are steeped in classical Russian literature, which we love and hold to be incredibly important. And, no doubt, we are eagerly anticipating the response of the UK public, especially the way the viewers would react to our attempts to come to terms with the history of the 20th century, which is unfortunately, once again, turns to reality in the 21st century. 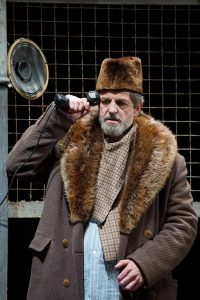 If you had an opportunity to collaborate with any British actor, director or producer, who would this be?

If I had an opportunity and time – “if” is the key word here, since I’m very happy to be working full-time with Lev Dodin,  –  I would prefer working with  Peter Brook and Declan Donnellan, as they are artistically kindred spirits. I do not mean this as a self-compliment. What I mean is that I saw their productions and I feel that I understand  where they come from, what they think and hope for,  and are trying to discover on stage. I feel I understand their working method, perhaps, even the essence of their work, and I really like their productions. As for actors, I really like Anthony Hopkins, although I have only seen him in films. I really like and respect the work of Daniel Day-Lewis, although, again, I saw him acting only in films. I admire Charlotte Rampling and Vanessa Redgrave — their masterful acting impresses me a lot! There are many other wonderful,  marvellously gifted British actors, but these names spring to my mind first.