REVIEW: In the Steps of the Ballets Russes. Russian Ballet Icons – A Spectacular Celebration of the Russian Tradition. 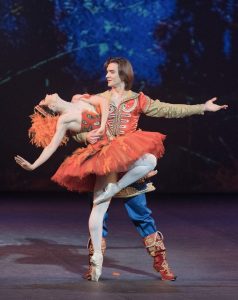 Maria Alexandrova and Vladislav Lantratov in the Firebird

The memories of the magical evening with Moscow Virtuosi had not yet faded away, when on 12th March another magnificent event organised by the Ensemble Productions took everyone by storm:  In the Steps of  the Ballets Russes. Icons of Russian Ballet  was a spectacular gala dedicated to the legacy of the legendary Russian impresario Serge Diaghilev (1872-1929)  and his famous ballet seasons.  The ballet gala has now become a tradition in London: first held in 2006, it gradually turned into one of the highlights of the performing season. The focus of the gala is on the traditions of the Russian ballet school and its legendary representatives. For instance, 2016 was a spectacular tribute to the memory of the great Russian ballerina Maya Plisetskaya (1925 – 2015). The event takes place at the Coliseum and is regularly attended by celebrities, British and Russian alike. This year one could notice Prince Michael of Kent discreetly talking to the Ambassador of Russia, Mr. A. Yakovenko, or spot Nikolai Tziskaridze sitting in the stalls watching the performance. Also, the appearance of the British pop-singer Boy George caused quite a stir at the gala.  This year, the fragments from the recognisable and loved Russian ballets were performed alongside the edgy experimental choreography, thus demonstrating that the spirit of the great impresario lives on in those who follow him. 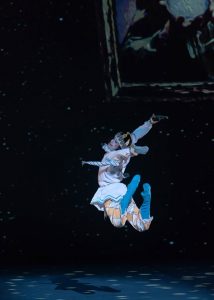 The performances of the gala evening were accompanied by the orchestra of the English National Ballet under the direction of Valery Ovsyannikov. It was a great pleasure to see such concentration of talent throughout one single evening!  Among them were soloists of the Bolshoi Theatre Dmitry Gudanov, Yevgenia Obraztsova, Vladislav Lantratov, Maria Alexandrova, leading dancers of the the Mariinsky Theatre Yulia Makhalina  Xander Parish and Vladimir Shklyarov, leads of the Royal Ballet  Vadim Muntagirov, Sarah Lamb, Zenaida Yanowsky, Tamara Rojo, as well as the representatives of the Vienna State Ballet Davide Dato and Lyudmila Konovalova. 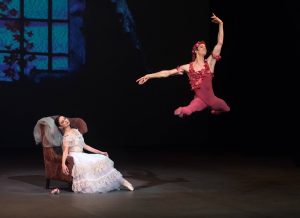 The pieces performed by the participants included the well-known and much beloved  Scheherazade, The  Swan Lake, The Firebird, The Sleeping Beauty, Le Spectre de La Rose and Petrushka etc. Vladimir Shklyarov was a desperate and lonely Petrushka, performing the famous fragment in the empty dark room. Iana Salenko of the of the Berlin State Ballet was a beautiful, graceful Dying Swan. Although her performance was exquisite, the programme  finished on a more joyful note — the energetic fragment from Don Quixote performed by the famous Spanish ballerina Tamara Rojo and the Mexican dancer Isaac Hernandez of the English National Ballet

Scene from the Fairy Doll

One of the highlights of the evening was a piece from  the Fairy Doll  — a little gem of a ballet inspired by E.T.A Hoffman’s tales which in 1919 became the basis for Diaghilev’s La Boutique Fantasque.  It is also quite remarkable that The Fairy Doll, choreographed by the brothers Sergei and Nicolai Legat, was the first ballet designed by Leon Bakst (1866-1924).  Later, Anna Pavlova danced her version of the Fairy Doll on her worldwide tours in the 1920’s adding music from Drigo’s Harlequinade and the famous Serenade pas de trios. All this makes it even more regrettable that the ballet is very rarely performed today.  Therefore it was very exciting to see it performed onstage by the students of the Academy of Russian Ballet named after A. Ya. Vaganova recreated and revived by  Nikolai Tsiskaridze, the present director of the Vaganova Academy. The students showed the most interesting fragments of the performance, including the dance of the fairy doll with  two Pierrots, which was once performed by Matilda Kshesinskaya with Sergei Legat and Mikhail Fokin. Eleanor Sevenard performing the Fairy Doll was superb in this role and was a delight to watch. 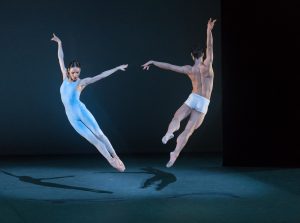 Another interesting feature of the evening was the premiere of the contemporary ballet Theatrum Vitae  staged by a young choreographer of Russian origin from Berlin Xenia Wiest — one of Europe’s most talented upcoming choreographers–, took the audiences by storm and by surprise.  The fragment in three acts was performed by the dancers of the Vienna State Ballet – Davide Dato and Lyudmila Konovalova.  “This work briefly outlines the history of human civilization,  narrated through mythology and philosophy, and ending with the present day period of  contemporary technologies… It is about where we come from and in which direction we are going,” —  summed up the producer of the ballet Olga Balakleetz, who is also head of the producer company Ensemble Productions —  organisers of the gala.   There were other remarkable examples of contemporary choreography presented throughout the evening. We particularly liked the Afternoon of  a Faun performed to the original score by Debussy by Svetlana Lunkina and Dmitry Gudanov. One should confess, it was a challenging task to overwrite the well-known choreography, but it seem to have worked out rather well — a rare example when the new version of a celebrated piece demonstrates that it can exist in its own right. 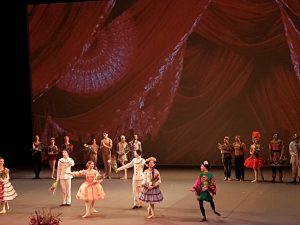 Overall, it was another spectacular and celebrated event. The magical evening was then followed by the gala reception and dinner at Savoy. Now we shall be looking forward with anticipation to the new gala 2018.