Russian Auctions 24th – 26th November, as part of Russian Art Week £9m Serov portrait sets new high but Russian market feels the pinch   The fall of the ruble and effect of economic sanctions appear to have had a significant effect on results for this week’s Russian Auctions in London (24-26 November). Almost 1,300 lots were offered, yielding total sales of £40.5 million – down 37% on last Summer’s Auction Week, and the lowest total since Summer 2012. Just under half (47%) the lots found takers – the lowest percentage since Winter 2008. It was not all gloom, however, with five works selling for over £1m, and Valentin Serov’s 1910 Portrait of Maria Zetlin fetching £9.2m at Christie’s to become the most expensive painting ever sold in a Russian art sale. Paintings accounted for all of the week’s Top Ten prices (see below). Christie’s leapfrogged Sotheby’s to acquire a 49.7% market-share while MacDougall’s consolidated their status as N°3 firm in the field with sales of £7.7m and a market-share of 19.2% – well clear of Bonhams on 4.3%. 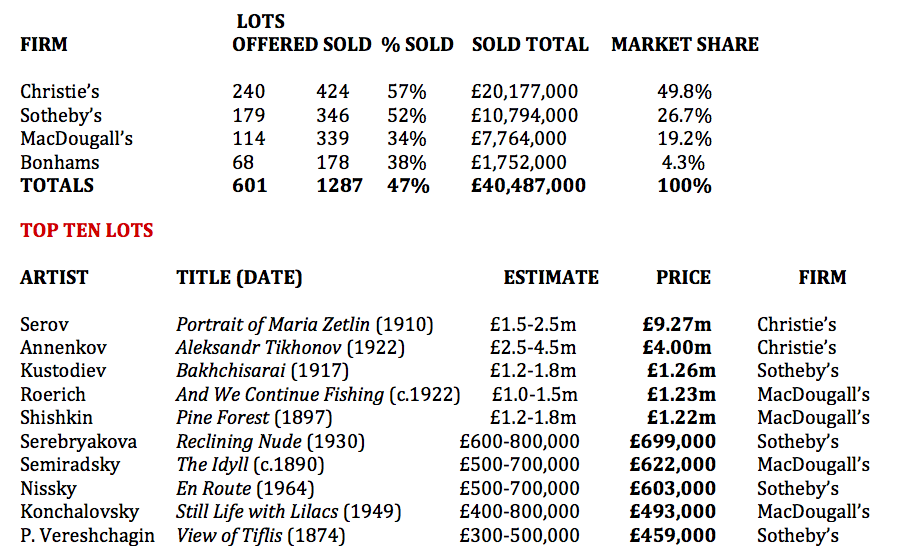