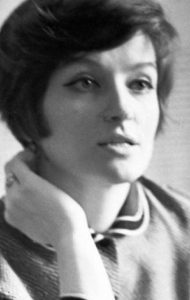 Mesmerizing and electrifying, dark and unconventional, mystical and visionary – the epithets that are used to characterize Larisa Shepitko’s cinematic style by the few critics who know and write about her work, prepare one to meet one of the greatest and it seems well established names in world cinema. So why do so few people actually know about her films? Larisa Shepitko is indeed among the lesser-known filmmakers of the ‘New Soviet Cinema’ of the 1960s and 1970s (a cinema known for the emergence of directors such as Andrei Tarkovsky, Marlen Khutsiev, and Elem Klimov – the last became Shepitko’s husband), but she is without doubt, one of the most interesting and talented directors of that generation. A former student of Ukrainian, Soviet cinema master Alexander Dovzhenko, Shepitko died at the height of her career at the age of forty in a fatal car accident outside Leningrad, leaving a small but truly extraordinary body of work consisting of just four feature films. Watching her films on the big screen for the first time can be a painful experience. The more you familiarise yourself with her work, the more you realise the inner tragedy of Shepitko’s legacy. A director with the truly individual voice, a humanist and a mystic, she struggled to satisfy official Soviet censorship much more than her famous film school contemporaries. The messianic motif that was always present in her films failed to become a part of historical materialism, but rather proved to be a mystical key note of humanism and immortality, that directly influenced spectators and bewildered Soviet officials. Employing this key note as one of her main techniques, Shepitko established a reputation as an auteur with the feature films Wings (1966) and You and I (1972), both of which questioned many common notions of Soviet society.

Beginning of an Unknown Century (1967)

Between these films there was Beginning of an Unknown Century (1967), a trilogy commissioned to mark the fiftieth anniversary of the Revolution. Andrei Smirnov’s Angel and Larisa Shepitko’s Motherland of Electricity (two films which London will have an opportunity to see on March the 8th), were two parts of that trilogy, which deemed too critical of the early years of Soviet rule, were banned on completion. Shepitko’s film, Motherland of Electricity only surfaced in 1987, long after her death. Like all her films, it introduced existential themes, both personal and universal, in a poetic and gentle form. It is loosely based on a story by Andrei Platonov, one of the Soviet Union’s most challenging writers. Shepitko tried to reintroduce Platonov’s unique ‘broken’ language, considered difficult even for native Russian speakers, into a universal cinematic form. Like all of Shepitko’s films, Motherland of Electricity was spectacularly shot and complemented by a strange musical score, testifying to the director’s interest in both sound and space on screen, and giving birth to a completely new poetics of cinema. At the same time, working as a director, Shepitko was always conscious of her gender, and long before ideas of cinematic diversity and a male gaze became current, testified the emergence of a ‘new female cinema’: ‘I’m giving you my word that there’s nothing, there’s no frame in my film, not a single one, that doesn’t come from me as a woman. […] Men, too, can perfectly make  ladies’ sentimental needlework. But a woman, as one half of the origin of humankind, a woman can tell the world, reveal to the world some amazing things. No man can so intuitively discern some phenomena in the human psyche, in nature, as a woman can’. Kino Klassika Foundation’s mission to (re-)introduce great Soviet directors to British audiences could not have chosen a better director, and indeed a better film, to celebrate International Women’s Day in this year of the centenary of Russian Revolution. Join us for a long awaited celebration of this visionary talent. Maria Korolkova is a Senior Lecturer in Media & Communications at the University of Greenwich. Before that she taught Cultural Theory at Richmond, and European Cinema at the University of Oxford, where she also completed a Doctorate on Representations of Space in Russian Cinema of 1910s and 1920s. Maria is an independent film critic, with her articles featuring in BBC World Service, Calvert Journal, Forbes and Times Literary Supplement. Maria curated A World to Win: A Centenary of Revolution on Screen for Kino Klassika Foundation.   The screening will take place at 7pm on Wednesday 8th March at Regent Street Cinema. Book your tickets at https://www.regentstreetcinema.com/programme/beginning-of-an-unknown-century/