AN EVENING WITH HH PRINCESS OLGA ROMANOFF: A WILD AND BAREFOOT ROMANOV. 30 OCTOBER

Marking the publication of HH Princess Olga Romanoff’s memoirs in early October this year we are joined by the author to discuss her life, upbringing, and experience of life in Britain.

Princess Olga is the daughter of the eldest nephew of Tsar Nicholas II. The book has been published to coincide with the centenary of the events that led to the murder of the Tsar and his family.

The Q&A session with the Princess will be chaired by Irene Kukota. 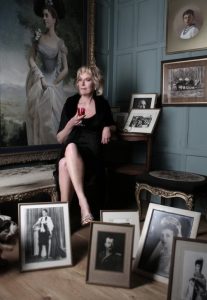 Princess Olga’s father Prince Andrei managed to flee turbulent Russia at the end of 1918 together with his first wife and the Grand Duke, his father, while his mother Grand Duchess Xenia, the sister of  Nicholas II was rescued from the Crimea four months later by the British battleship HMS “Marlborough” together with Her Imperial Majesty, the Empress Maria Feodorovna,  mother of Tsar Nicholas II and sister of Queen Alexandra of Britain.

The fabled Romanovs jewels that they were able to smuggle out had to be sold,  and the exiled family lived for some time at various grace-and-favour homes on the estates of the royal residences of Windsor, Hampton Court and Balmoral.

When Prince Andrei married Nadine McDougall, the rambling 30 room Provender House, now open to the public, became his home. Stories from his time in Russia before the Revolution – many of them hitherto untold – were passed down to Princess Olga by her father.

Princess Olga will also talk about her home – Provender House – that is crammed full of fascinating Romanov memorabilia, from the crockery used by the Tsar and his family during their final captivity in Ekaterinburg, to the diamond blade penknife used for scratching the news of Prince Andrei’s birth on a window pane in the Winter Palace – still there for visitors to see.

This event is organised in collaboration with Russian Art & Culture.