Erté’s Alphabet Shows in London as Part of Erté: A Celebration, Grosvenor Gallery, Until 30 November 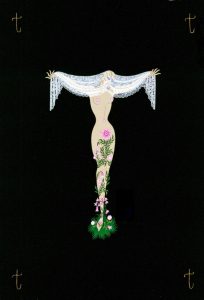 ‘He had neither equal nor rival; he was, and remains, unique’ – art critic Brian Sewell on Erté

This November, a collection of more than 100 original gouaches by the Russian-born French artist known by his pseudonym Erté (Romain de Tirtoﬀ,1892-1990) goes on show at London’s Grosvenor Gallery. All works in the exhibition are for sale.

Among the works on show is his celebrated Alphabet suite, created between 1927 and 1967, and shown here in its entirety. All 26 letters are reproduced in delicate human form. First shown as a complete set in 1967, it was a sensation, leading one art critic to remark, “If Michelangelo came back to earth, he wouldn’t have had more publicity.”

A figurehead of Art Deco, Erté was one of the 20th century’s most inﬂuential designers in the worlds of fashion, theatre and film. This exhibition, shown to critical acclaim last year at the Hermitage Museum in St Petersburg, celebrates the 125th anniversary of the artist’s birth.

Erté is perhaps best known for his elegant fashion designs and for producing magazine covers, including over 250 for Harper’s Bazaar, three examples of which were beamed onto the Empire State Building in New York earlier this year in celebration of the publication’s 150th anniversary. His prolific output also included designs for the Folies-Bergère and operetta, silent films and grand opera.

Opened in 1959, the Grosvenor Gallery was run by Eric and Salome Estorick, who first met Erté 50 years ago, and remained his dealers and close friends until the artist’s death in 1990. In 1967, the couple gave Erté his ﬁrst solo exhibition in New York where the entire show was purchased by The Metropolitan Museum of Art.

I started to work on the series of Alphabet paintings in 1927, after a very successful exhibition at the Galerie Charpentier in Paris. This gallery proposed another exhibition two years later for which I had planned to complete The Alphabet. Unfortunately, I was much too optimistic. I had not realized how much other work I would have to do at the same time. There was my contract with Harper’s Bazaar…and for the theater” (working on three major spectacular productions in two years as well as the usual tableaux for the Folies-Bergére and several operas). “The result was that in 1929, when my second exhibition opened, The Alphabet had not made much progress. From then on, little by little, I did complete one or two letters between various urgent commissions, but it was only forty years later that I finished the set. In 1967 (I was asked to) exhibit The Alphabet at an Erté show in London. This time I was ready—or at least I thought I was. While preparing to send the pictures to London, I suddenly noticed to my astonishment that one letter was missing in the series; it was the letter “L”. I began to paint it immediately and completed it just in time for the show. As it turned out, this letter became the most successful of all in the eyes of the public. – Erté