The most renowned Russian painter of the 19th century, Ilya Repin, was born 170 years ago this week. To celebrate this anniversary we’ve compiled a list of his most famous works.

Barge Haulers on the Volga, courtesy of the State Russian Museum

Repin’s Barge Haulers on the Volga, in which he portrays the hardships of labour, is one of Repin’s most famous paintings and one that has come to epitomise the Peredvizhniki. The movement was formed by fourteen artists dissatisfied with the conservative attitude of the Academy of Arts in St Petersburg in 1870. Repin joined the Peredvizhniki, or Wanderers, in 1878, having already completed this painting. He considered Barge Haulers to be his first professional painting, producing it immediately after leaving the Academy of Arts. Praised for its unsentimental depiction of lower-class workers, the painting epitomises Repin’s desire to depict the tensions within the social order. The portrayal of the common man’s physical toil was considered a worthy subject by Repin and his contemporaries. To complete the painting Repin travelled down the Volga and got to know barge haulers, which helped him paint them as real people with individual characters rather than caricatures. The eleven men depicted in this scene represent a variety of ages, physiques, and ethnicities that made up the Russian Empire at the time. The lead hauler was modeled on a defrocked priest whom Repin got to know during his time spent on the Volga. Despite its message of social inequality, the painting was bought by Emperor Alexander II’s second son, Grand Duke Vladimir Alexandrovich. 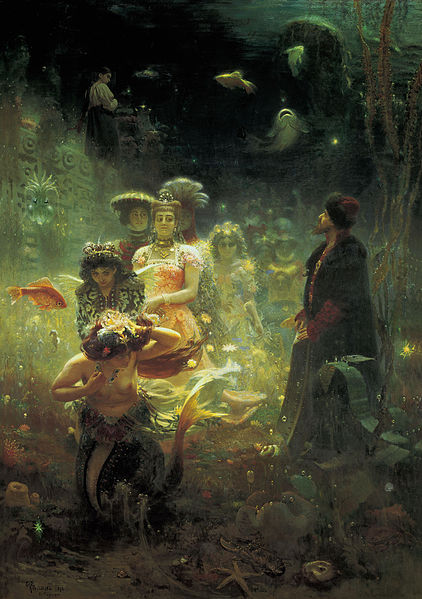 Sadko is an example of Repin’s rare venture into fantasy and mythology. It depicts a scene from the medieval Russian story of Sadko, in which a poor Russian musician from Novgorod visits the underwater realm of the Sea Tsar. Sadko is forced to play the ‘gusli’, an old Russian harp, in the underwater kingdom for all eternity as punishment for his lack of gratitude for the Sea Tsar making him a wealthy sea merchant. Disinterested in the beautiful watery creatures before him, Sadko gazes longingly up at his wife left on the shore in the top left of the painting, with whom he is eventually reunited. The fairytale was later turned into an opera by Nikolai Rimsky-Korsakov in 1896. Repin managed to sell the painting to Grand Duke Vladimir Alexandrovich before it was completed, so that he could afford to hire the models and costumes he needed to finish it. 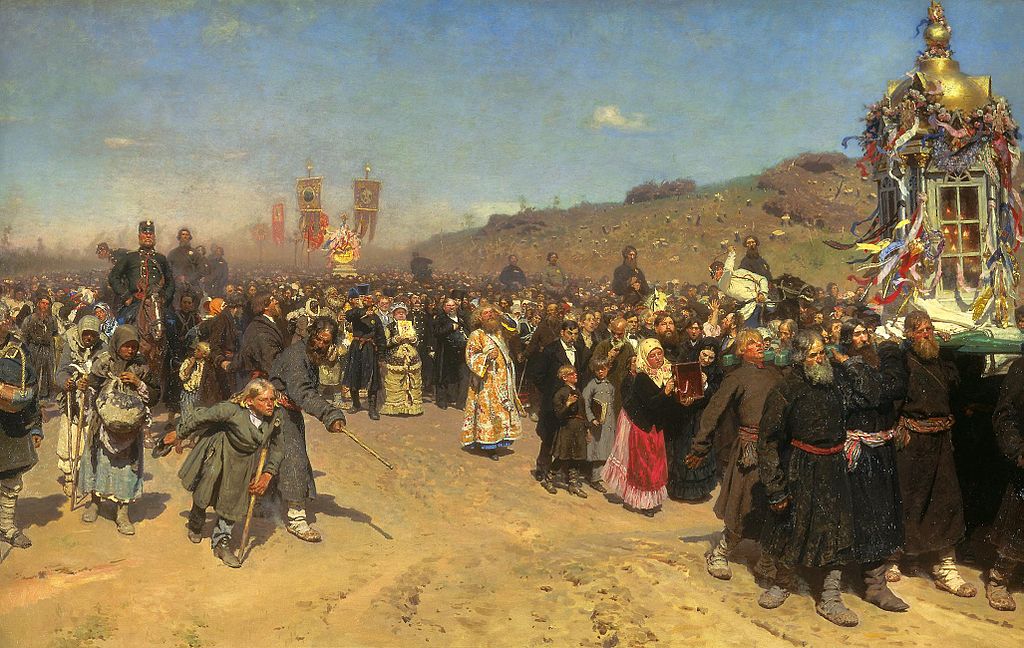 Religious Procession in Kursk, courtesy of the State Tretyakov Gallery

Religious Procession in Kursk Province is considered one of Repin’s greatest achievements and displays Russia’s social classes and the tensions that divided them. The huddled crowd is processing with the famous Our Lady of Kursk icon from the Korennaya monastery to the nearby city of Kursk. Featuring various elements of Russian society, the painting is a harsh record of contemporary life. Despite the title, it is not a religious painting. It serves more as an examination into the psychology of the individual and of the crowd itself. Repin’s unforgiving social commentary in this painting earned him criticism, mainly due to the depiction of violence and drunkenness on such a holy occasion. He stresses the differences in social status with elements such as the boy on crutches being beaten, the priest dressed in luxurious gold and vainly running a hand through his hair, and mounted officers shouting and raising their whips at the crowd. The painting was bought by Pavel Tretyakov, the businessman, philanthropist, and founder of the Tretyakov Gallery in Moscow. 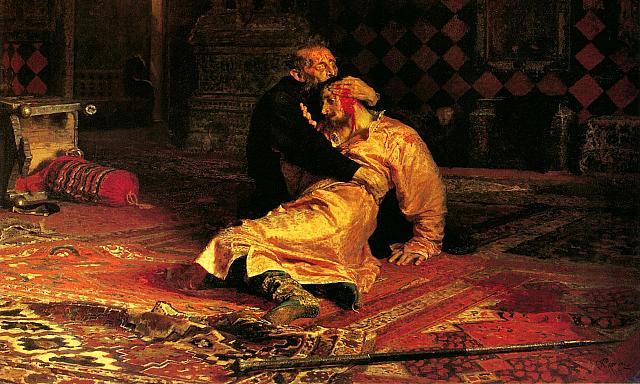 Ivan the Terrible and His Son Ivan on November 16th, 1581, courtesy of the State Tretyakov Gallery

This painting portrays a horrified Ivan the Terrible embracing his dying son, Ivan, after fatally wounding him in a fit of rage. It is thought that Repin chose this subject to demonstrate his rejection of violence after the assassination of Alexander II in 1881. Repin demonstrates his ability to capture emotion in this psychologically intense scene. The argument arose when the Tsar physically attacked his son’s pregnant wife for wearing immodest clothing, causing her to miscarry. Ivan ran to his wife’s defence and was struck by his father’s staff, dying a few days later. The contrast of the figures in this painting is particularly striking. The serenity in the tsarevich’s face could not be more different from the panic, terror and regret in the Tsar’s. 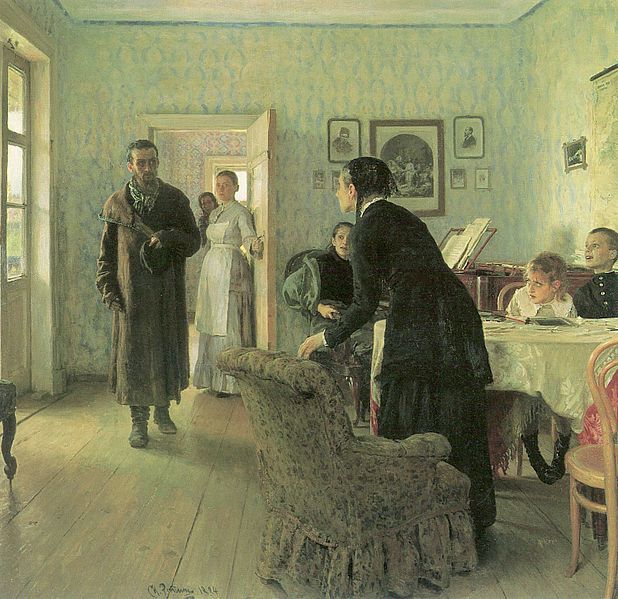 They Did Not Expect Him, courtesy of the State Tretyakov Gallery

They Did Not Expect Him shows a family surprised by the unexpected return of a political exile. Repin has managed to capture the reactions of all the family in this snapshot of a moment. The main character hesitates to embrace his mother, rising from her armchair. At the table his son is beaming with joy yet his daughter is possibly too young to recognise him. The painting caused much controversy at the 12th Peredvizhnik exhibition in 1884-5, as Repin’s contemporaries linked the central figure to the assassination of Alexander II in 1881. Repin had placed a photograph of the Tsar in his coffin on the wall next to where the painting was hung. Yet the identity of the figure remains unknown. Repin repainted the character’s face three times between 1883-8 striving for the perfect expression.

Reply of the Zaporozhian Cossacks to Sultan Mehmed IV of the Ottoman Empire, courtesy of the State Russian Museum

A history painting set in 1676, the scene shows the legend of the Cossacks drafting a reply to the ultimatum of Sultan Mehmed IV of the Ottoman Empire. Despite having been defeated by the Zaporozhian Cossacks, Mehmed IV demanded that they submit to Ottoman rule. In reply, the Cossacks wrote a letter full of profanities and insults. It is probably one of the rudest pieces of diplomatic correspondence ever written. The text of the letter can be read here, and makes for an entertaining read! The painting was bought by Alexander III for 35,000 rubles, the greatest sum ever paid for a Russian painting at the time.

Repin and the great Russian author Leo Tolstoy were close friends for over 30 years. They often spent time together at Tolstoy’s country estate Yasnaya Polyana, and Repin drew his friend on many occasions. This particular painting took ten years to complete, and clearly conveys the writer’s concentration and his spiritual quest for a simpler life. As a protest against social injustice and to draw attention to the problems of the peasantry Tolstoy often engaged in ‘peasant labour’, here we can see him barefoot and dressed in peasant clothing. Tolstoy posed many times in his garden for the work, when it what finally completed he was said to be unhappy with it. Yet it was very popular with the general public; when Tolstoy was excommunicated from the Orthodox Church the painting became the focus of student demonstrations with flowers placed before it and speeches made in front of it.